I recently spoke with EDGUY frontman Tobias Sammet about the band’s new album, Tinnitus Sanctus. A brief excerpt is available below: 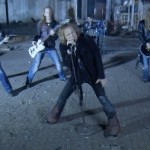 Sammet: “I can’t speak for everybody in the band, but I got sick of that ‘high velocity at any price’ approach. If you really have to say something at that speed, like in ‘Speedhoven’ for example, then it’s fine because it’s supposed to be fast, but I really don’t want people telling me what to do. I’m not going to record a fast song just for the sake of recording a fast song. That doesn’t make sense, and to me the mid-paced songs give you many more opportunities to put energy, melody and atmosphere into them. The music breathes so much more, and that makes it much easier to give the song a heart and soul. There are so many power metal bands playing fast songs and one song sounds like the other, and quite often I get the impression that those songs are being created from a blueprint.”