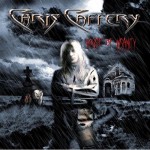 After two solo albums (three if you count W.A.R.P.E.D., the pimped-up version of his 2004 debut Faces), Savatage / Trans-Siberian Orchestra / Doctor Butcher guitarist Chris Caffery has decided to give the diehard (read: pig-headed) Sava-legions a record closer to their collective comfort zone. Kind of ironic considering he was trying to respect his band’s legacy by not ripping it off when he started pumping out his own music. Thankfully, while there are some definite Savatage moments on House Of Insanity, Caffery hasn’t sold out on his original plan of attack to create something with its own identity. The record is raw and, if such a thing exists, under-produced to the point it sounds like it was recorded analog and live off the floor. A very good thing if you understand the term “old school.” It also has a comfortable flow from top to bottom, something that has been lacking on his previous outings. Caffery is a more than capable vocalist, working the material with his somewhat limited range admirably so that any perceived weaknesses sound like they were left in the mix on purpose. Musically, he reaches into a guitar-heavy bag of tricks full of pissed-off-Schenker shred, touching on everything from the Faces album to Doctor Butcher to Power Of The Night-era Savatage. It’s actually kinda weird hearing Caffery do what Savatage never could; mating the classic good ol’ days sound with the younger, symphonic-oriented vibe that spawned TSO. Fans of the latter will be particularly thrilled with the duet featuring ex-‘Tage / Circle II Circle vocalist Zak Stevens on ‘Solitaire’, ‘Back’s To The Wall’, and the counterpoint-laden ‘Winter In Hamburg’ (which could easily find a home on the Trans-Siberian stage). The best moments, however, are the ones where Caffery is running on instinct rather than design, as on rawk opener ‘Seasons Change’, groove-sick ‘I Won’t Know’, ‘House Of Insanity’, ‘Big Brother’, the dark and doom-ish ‘I’m Sorry’, and a scorching reggae-metal cover of Bob Marley’s ‘Get Up, Stand Up’.