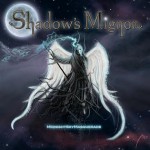 Frameshift guitarist / songwriter / producer Henning Pauly is known for going off on a tangent every now and then to explore avenues outside his usual prog-metal haunts, whether it be epic Ayreon-styled storytelling (Babysteps) or tongue-in-cheek tributes to punk (The Anthologies) and controversial “rock stars” who don’t really have their shit together after all (Credit Where Credit Is Due). His latest venture, Shadow’s Mignon, most certainly falls into the second category, celebrating the all-powerful heavy metal cliché by offering up every riff, lick and lyric that made Dio, Judas Priest and Iron Maiden famous. Midnight Sky Masquerade isn’t brain surgery and was never meant to be, focusing instead on taking traditional metalheads back to that old school comfort zone through simple off-the-wall guitar shred (Pauly really should do this more often) and killer vocals from Transmission singer Juan Roos, easily the most underrated vocalist in the biz. Digging deeper, the lyrics are in fact the meat and potatoes of the album, with the band quite happily taking the piss out of the Dungeons & Dragons / Elves & Orcs imagery that has given acts like Manowar an over-extended lifespan. Hell, just reading the song titles ‘A Dragon Shall Come’, ‘No Metal Son Of Mine’, ‘Darkness Comes To Light’ and ‘Kingdom Of The Battle Gods’ is enough to let you know that a comedy troupe has entered paradise. Fans of Punky Brüster, Tenacious D, and particularly Zimmers Hole will get the joke and love it. The offended diehard true metal fans will cop a Joey DeMaio attitude and call Pauly & Co. out as blasphemers and worshippers of false metal. Much to Pauly’s delight, I’m sure, because it’ll be fuel for the flamelike fire that’s sure to spawn album #2, hopefully sooner rather than later.