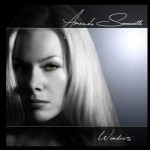 Having risen to fame in the metal world over the last several years writing and recording with After Forever, Edguy, Kamelot, Epica and Avantasia – extensive tours with the latter two included – vocalist Amanda Somerville has stepped up with her second full length solo album. A 12 song journey through what will be unexpected territory for some fans, Windows sees Somerville returning to her first love, namely making music on her own terms. That said, the album is diverse mix of musical styles tied neatly together by her instantly recognizable voice, making it a riveting listen as you wonder what’s coming next. In amongst the rock tracks peppering the album (‘Inner Whore’, ‘Mayday’ and the goth-heavy ‘Out’) are heady AOR songs (‘Moth’, ‘Point Of Safe Return’), industrial pop (‘My Song For You’), ethereal Santana-esque blues (‘Clean’), and two whiskey-flavoured last call tunes (‘Carnival’ and ‘Sometimes’) that would make Sinatra smile and Norah Jones jealous. Basically, getting into Windows requires leaving musical prejudice at the door, but the payoff is more than worth it in the end. For those that can’t be bothered to experiment, check out Somerville’s full metal racket HDK, just a “little bit” heavier than anything she’s done before. Check out Windows audio samples here.