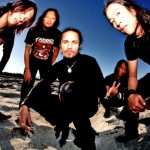 I recently caught up with DEATH ANGEL guitarist / vocalist Rob Cavestany to discuss the band’s new live DVD, Sonic German Beatdown, and their touring plans for the rest of 2009. An excerpt is available below:

“The main thing for us about putting the DVD out is to get it out there for the fans because in our entire career we don’t have one official live DVD or video cassette,” says Cavestany. “I think we’re the only band in the world that hadn’t put one out and we’ve been around since the days of VHS (laughs). It was way past due to have something documented and officially released. I know there are a lot of Death Angel fans around the world that have never seen us play live, so this is a chance for those people to get a look at the band in our full fury on stage.”