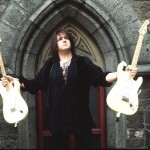 I recently caught up with my guitarist buddy Joe Stump to discuss his new album, Virtuostic Vendetta. An excerpt from the interview is available below, with Stump discussing his idol Ritchie Blackmore and the descent into medieval Renaissance madness that launched Blackmore’s Night.

“I have a lot of respect for him because he’s loved that kind of music his whole life, and he did make a really serious commitment to his new music,” says Stump, diplomatic as ever. “It’s like he picked up a new instrument. I listen to a Blackmore’s Night record and there are moments of brilliance, but the whole thing starts to wear me down by the end. It’s sort of similar with the live show. It’s quite good, but he doesn’t play nearly enough electric and it’s almost as if he’s doing it out of spite. Everybody’s waiting for him to throw down on the Strat. He does a couple tunes, but he’ll play a lot of those solos that were done on an electric acoustically. There are some brilliant tunes on those Blackmore’s Night records, though, and a lot of the melodies are very Rainbow-esque.”

If you’ve never heard of Joe Stump, go to this location to take a listen and worship at the altar of no-nonsense shred. You’ll be glad you did 😉