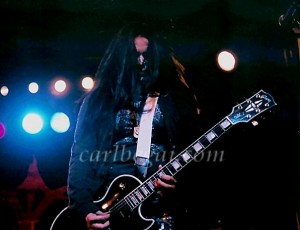 “You know when you’re finished school and you’re ready to take on the world, and the world shits on your head and tells you to wake up? It was kind of that moment for me,” says Bishop, having made peace on some level with the sad turn of events. “It was one of those moments where I though ‘Fuck, what am I doing with my life? I don’t want to waste it partying…’ At the same time I was grieving so hard and I didn’t have anyone to talk to who had been through something like that. I just got deeper into the music and started writing, and all these songs kept coming out. That’s basically the first album (laughs).”

A firm believer in fate, Bishop feels she was destined to become a musician. She didn’t follow the “normal” path of discovering music as she grew up; music found her instead.

“I’ve been into music for as long as I can remember. My dad found a keyboard in someone’s trash once, he brought it home and fixed it up, and I’ve been into it ever since. That’s how I learned to read music. I wasn’t even in Grade 1 yet and he bought me a theory book, which is how I learned about music, and I actually learned how to read words because of that book (laughs). My parents always encouraged me. I did things like the lunchtime recorder group in elementary school, I was in the high school band, different choirs, so I’ve been involved in music my whole life. I used music to deal with issues and things going on in my life even at a young age. That’s how I used to cope.”

Bishop made the move from her Ottawa home to Toronto in pursuit of music, but without a concrete plan. Scarlet Sins was born following a chance “meeting” with NuVynska, what Bishop considers a case of fate once again poking around in her life. 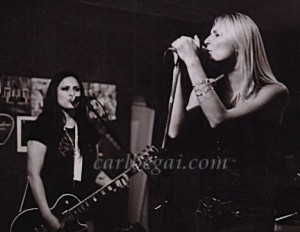 “That was amazing,” she says. “It’s kind of funny because when I decided I wanted to put a band together I was also looking for other bands to join. I found this band called Surface Underground who were looking for a guitar player, so I checked them out and I thought the singer was cool, but I realized that I really wanted to focus on my own music because I had all these songs. Three months later I finally put up an ad for a singer at KickInTheHead.com, and I refreshed the page to make sure the ad came out okay, and lo and behold Sylvya’s ad was right on top of mine. It was the same girl from Surface Underground.”

“The first time we spoke on the phone we clicked immediately. We spoke like we were old friends, sharing personal problems that we were going through at that time, and it honestly felt like we’d been close friends for a while. We started writing right away. She put lyrics to the music and helped me with some arrangements, so yeah, Sylvya and I have been close friends since Day 1. The rest is history (laughs).”

That partnership resulted in a sound that has proven to be hard for people to nail down. Comparisons to everyone from Black Sabbath to Tool abound and questions are raised constantly about where Scarlet Sins fits in the grand scheme of things. Are they metal or something outside the box? They have a trademark sound that, according to Bishop, was never planned out.

“I had no idea what it was going to sound like. I really didn’t, and I don’t think it was until we worked with Rich (Chycki / producer) and heard some of the final mixes that it really hit me. I’ve always loved hard rock and metal so it was natural that the music coming out of me was going to be heavy, but at the same time all my classical influences and even my mom’s pop side came out. I was bound to throw melody in there somewhere (laughs).” As mentioned previously, Bishop and NuVynska went through a long and painful search for the right people to round out the Scarlet Sins line-up. Finding bassist Tanya Nicklaus took three months alone, and it was time well spent according to Bishop even though Nicklaus was under her nose the whole time. She explains:

“I’d known Tanya previously, and it’s funny that she with us now because she kind of helped save my life. I knew her from Ottawa from being in that circle of musicians, and I knew that she’d lost someone she was close to as well, so when I was coping with my best friend’s death I just called Tanya up because I needed someone to talk to. I didn’t really know her at all. She helped me through that period, so I kept in touch with her, and when she found out we were looking for a bass player she was like ‘Well, I really like your band and your sound, I’ll take up the bass for it if you want.’”

“That was really cool for us because I’ve always known Tanya to be very dedicated and hard working in her bands, but at the same time switching instruments is difficult. Bass isn’t an easy guitar with only four strings (laughs). So, we wanted to audition other people as well but they just didn’t have it. The thing for us with Tanya and the reason we wanted her in the band is that we knew there wasn’t a harder working person out there.”

The obvious question is why Bishop and NuVynska didn’t simply opt for male band members (no pun intended…). It’s not like there’s a shortage of testosterone-fuelled musicians in Toronto. Or was it planned from the beginning to keep Scarlet Sins an all-female act?

“Well… I don’t know,” says Bishop. “Do guys set out to put together all male bands? That would have been the easy route, to audition male bass players. Let’s face it; there are more men playing hard rock and metal than women. But, we chose the hard route and that’s why it took three years to put the band together.” Supporting the view that Scarlet Sins is indeed a metal band, they attracted the attention of respected Toronto metal icon Ray “Black Metal” Wallace. Known for his tooth-and-nail support for metal bands big and small, having spent years working alongside Canadian legends Sacrifice and Razor, Wallace volunteered to manage Scarlet Sins. The band credits him with getting the buzz going in earnest and taking them to the next level. He’s also the reason this showcase was possible.

“Ray found us,” says Bishop. “He heard our songs and wanted to meet us, and he really was one of the best things to happen to Scarlet Sins. We met with a few different managers at the time, and we just took one look at him and knew he was the guy. He had a beer, he was licking the sauce from some chicken wings off his fingers, and that was it, he was the guy (laughs). I can’t explain it, because we hadn’t even said one word to him yet, but we knew Ray was the one we wanted.”

Sadly, Wallace passed away on November 27th, 2007 after suffering a brain aneurysm. He is sorely missed by everyone that knew him. Thankfully, he was able to experience the fruit of the Sinners’ labours before he left us and made no secret of how proud he was of the band and their debut album.

“I’m really proud of it,” Bishop says of the record, both from a band and a personal perspective. “When I listen to the ‘vagina flower’ demo (laughs) the playing wasn’t that bad, but when I listen to the album I’m really proud of how I played on it. I think at that time I was listening to a mixture of Rammstein, Iron Maiden, and Metallica as usual. I was definitely ready for that moment. What I want for the next album, though, is more solos. I want my Kirk Hammett moment (laughs).”

Writing for the next album is underway, and according to Bishop the fans can expect something much bigger and bolder than the debut. Four heads and their accompanying points of view, she says, are definitely better than one or two.

“I find that when I listen to Iron Maiden a lot I end up writing galloping riffs everywhere (laughs). I don’t want to be doing that. We’ve been listening to a lot of Killswitch Engage, and Lamb Of God is one of my favourite bands of the last few years, and In Flames. Tanya and Elie being in the band is going to influence the sound of it as well because they weren’t in the band when Sylvya and I wrote the songs for the first album. I mean, Elie is amazing; she can play drums better than guys who have been playing twice as long as she has. So, even if I try to write the same songs that I did on the first one, the new album is definitely going to be different. I’m really excited.” 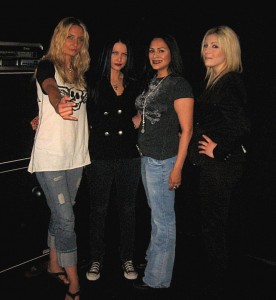