The sleepy town of Topping, Virginia – population 1,766 if you believe the internet – is the last place you’d expect to find the singer of a neo-classical metal band. And you won’t because she’s been calling Osaka, Japan home since 2006, much to the benefit of self-styled “dramatic metal” shredders MinstreliX. Founded in 2004, the band cut a limited run four-song single with former vocalist Leo Figaro only to have things fall apart two years later, forcing the search for a new singer. Enter Lola, former resident of a U.S. town so small Google Earth has issues finding it, living and working in Japan with absolutely no designs on joining a band. Or standing on a stage, for that matter. New environments often bring with them changes both necessary and inspired, however, and when fate threw an unexpected opportunity to join MinstreliX at Lola she took it.

“Coming to Japan was a big change from that rustic scene, but I’ve always been open-minded and flexible so at first it wasn’t so hard to adjust to the changes,” she says of the move from to Osaka, which added well over two million people to her neighbourhood. “It’s so strange because the culture is so different in Japan compared to the States, but you don’t feel the culture shock until you’ve lived here for a while. For a foreigner who can speak English, Japan is a paradise. Work is easy to find, pays well, and you get a lot of paid holidays. The food is delicious and healthy, the people are beautiful and generally very mild tempered and nice, and the Japanese are very hospitable. After you have lived here for a while though, you start to realize the big differences that you can’t see until you start to understand the culture. And the differences are so vague and difficult to describe it would take me ages to go into details (laughs). The hardest thing about living here is holding back. I’m a very open and direct person and I like to express my feelings, but the Japanese are intimidated by bluntness and I tend to be too forward and scare them off (laughs). But, they like to see that side of me when I’m on stage so it’s a good thing sometimes, too.”

Although Lola has a healthy taste for metal – Kamelot, Eluveitie, Dimmu Borgir, Nightwish, and Dark Moor being some of the bands topping her list of favourites – she admits the idea of joining a band had never crossed her mind. 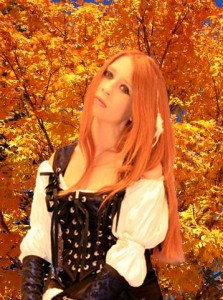 “The metal band thing was definitely something I started after I came to Japan. Until joining MinstreliX, I actually had no experience singing in a band at all. I was interested in the music scene and met a few people in the business when I got here. I met the members of MinstreliX at one of their live shows and became friends, but had no idea that I would one day be a member. Things got kind of sour with Leo and he ended up leaving the band. I was looking for something new and exciting to do and there was an opening, so I auditioned and was eventually invited to join. It was a huge thing because the music was so difficult and I have never had the opportunity to sing in a studio or as a lead vocalist or even with guitars and drums. My only singing experience was singing in a choir in high school. Boy, was it tough to keep up!”

Lola says her initial interest in MinstreliX was sparked by never having heard neo-classical metal before. Once in the band she had to make the songs her own, which led to the creation of their new album, Reflections.

“Most of the songs on Reflections are re-makes of the songs they did when Leo was the lead vocalist,” she reveals. “The songs were really popular and they sold out their first mini-album very quickly. The album has even been sold on the Japanese Yahoo Auction for over $400. But, that album wasn’t backed by a label and we wanted to update and make ‘Lola’ versions of the songs. We were just going to do demos and pass them around to appease old fans, but I thought that if we were going to record we should do it properly and make a real album. The songs were so good we wanted to promote them and make a proper CD.”

With a huge number of metal bands on the Japanese scene, it’s not unreasonable to believe that Lola’s presence in MinstreliX is viewed as an attempt to cash in on the novelty of having an American fronting a Japanese band. Lola is well aware of what some people are thinking, but she feels she’s proven her worth as a singer. 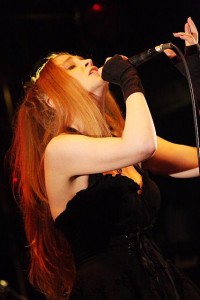 “The band definitely took into consideration that I was Caucasian and could use English properly. I’m sure they had many reasons for picking me, but they could have chosen someone with more band experience. In Japan people who can really use English properly are few. Even though Leo has an amazing voice he couldn’t do the band justice because of his English. I think they also wanted someone who really stood out so they would be remembered easily. As much as I’d like to be seen as just a good vocalist and not for my mother tongue and my race, in this country it’s a valuable commodity. Now though, I would hope they see me more as a good performer and singer, looking beyond my language abilities and colour.”

“When the band first chose me as the new vocalist, they were worried that people might find it cheating having someone who can sing in English perfectly,” Lola continues. “Everyone’s image here of metal is English, but very few can pull off singing the language properly. Maybe there are people who think it’s not fair that I can naturally sing in English, but as far as I know no one has said anything of the sort.”

Additionally, Lola has no illusions about her female-ness playing a role in pushing MinstreliX into to the spotlight.

“I know that I make the band stand out mostly because of my looks. I’m more worried that people from outside of Japan will criticise me, saying something like its not real Japanese metal because I’m not Japanese. But, that would be very silly; there are bands from all over the world that have folks from other countries joining them. Kamelot, for example, they’re American and their vocalist Roy Khan is Norwegian. Why is it so strange for me to do the same? I just happen to live here and wanted to sing. It’s not like they imported me from the States just so I could sing with them nor was my purpose in coming here to join a band. I’m just doing what I love doing. So far, I’ve had nothing but positive feedback from within Japan and abroad, but you never know what people are actually thinking.” 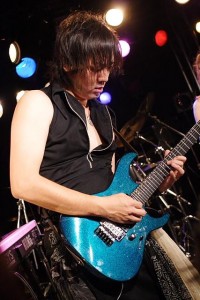 Reflections is a fine introduction to their world, and wholly unexpected given the Lola’s symphonic-goth image and Nightwish-esque album cover. MinstreliX is immediately reminiscent of Rhapsody Of Fire and classic Walls Of Jericho-era Helloween with a hint of Blackmore’s Night folk thrown in for good measure. Lola credits guitarist Takao for the band’s direction, which she says comes from him wanting to cover as much ground as possible with his music.

“Takao wrote music for Visual Kei (Japanese gothic rock) for years – he was really into Malice Mizer for a while – until he decided he wanted to do metal,” says Lola. “His major inspiration to take up metal was listening to Dark Moor, so I think that is were the neo-classical stuff comes from. It’s interesting that you mention Blackmore’s Night because Takao is also a fan of them (laughs). though. After discovering them, he decided to quit the Visual Kei scene and started writing metal. Takao has also studied classical guitar and knows his music theory. I think he just likes so many different kinds of music that he didn’t want to leave anything out when he was writing songs for MinstreliX.”

“Unlike a lot of other Japanese metal bands, what makes Takao’s music different is definitely his being open to music other than metal. I find that Japanese people tend to be knowledgeable in only one subject. They will know all there is to know about metal, but tend to neglect the other kinds of great music out there. Also, the general perception here is that metal vocalists should be that high tone ‘80s Judas Priest thing. I was a tenor in a madrigals choir for some years; I guess that’s where my sound comes from. I never intended to be a metal singer, it just sort of happened and that full sound just kind of fit the music.”

For the future, Lola says the band will indeed return with an album’s worth of original material at some point, possibly featuring a couple songs recorded in Japanese. She’s been living the country long enough that she trusts her abilities to pull it off, as does the band.

“I think what I like most about Japanese culture is the way that everything is done properly,” she says of living in Japan. “I find when I go home to visit that there are so many things that are done half-assed. People’s way of thinking here is that if it’s not done perfectly and correctly it’s not worth doing, or keep doing it until it’s perfect. I feel the American way of thinking is ‘Hey, it’s good enough!’ I can’t say that this has influenced my lyrics or performance, but it has inspired me to better perfect my singing. I have to admit, if I had joined a band in the States I don’t think my singing and performance would have improved as much as it has singing here. I’m not a natural perfectionist so it has been very difficult for me to adapt to the strict social rules. Everyone looks and acts so proper here, perfectly arranged fashion and hairstyles, politeness, formality. I’m still rough around the edges, but I have done away with a good deal of my random tendencies.” 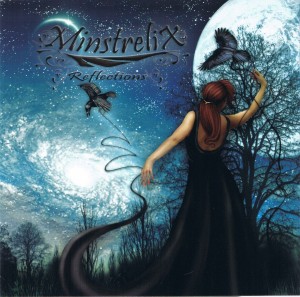 For more information on MinstreliX go to this location. Click here for audio samples and to purchase Reflections.