When it comes to music guitarist Jed Simon doesn’t do things quietly. From his early days with Armoros and Caustic Thought to a crushing decade in Strapping Young Lad and his continued work with Zimmers Hole, Simon’s life has been about being louder than everyone else. The mission continues in 2009 with the birth of Tenet, a solo project bubbling beneath the surface for the past 13 years that mutated into a band of familiar faces with an agenda based on grab-you-by-the-face brutality. Teaming up with ex-Forbidden guitarist Glen Alvelais, re-uniting once again with Zimmers Hole / ex-SYL mates Gene Hoglan (drums) and Byron Stroud (bass), Simon has unleashed a full scale old school thrash album entitled Sovereign that recalls the days when aggression wasn’t disposable paint-by-numbers kid stuff. It is the real deal, based on roots and feel rather than example. Tenet is not the answer to whatever gaping hole that may have been left in Simon’s life with the demise of Strapping Young Lad. It’s his next logical step as a musician who lives his metal rather than merely playing it.

“This started back in 1996. It was me and Steve Wheeler, the drummer from Zimmers Hole, and we’d just get together after practice to do some straight-up death metal. We did a demo and nothing really happened and it wasn’t that big of a deal, so we just kept doing our other things. Over the years, though, it started to gel. It took me a while to figure out what I was doing because I just wanted to be Morbid Angel back at the beginning (laughs), and it ended up being this. Just old school, stripped down, no fucking bullshit, which is what I love. Guitars, bass, drums, and somebody telling you to hit the road (laughs).” 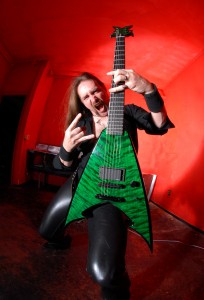 “It’s me, it’s pure, it’s coming from my soul,” he adds. “There’s really no influence on it except perhaps from the other guys that played on it, but I wanted to do the solo thing for a reason. I didn’t want any help writing it, so it’s old school and stripped down and bare, which is how I like my metal.”

With Simon keeping things as old school as possible, Sovereign consists of a mere nine songs. Between that and the classic thrash vibe, the album is tailor made for the vinyl LP-loving generation that grew up with Tenet’s brand of noise.

“That wasn’t intentional, that’s just the way it came out,” he reveals. “If I remember correctly, Century Media wanted me to do one extra song, or maybe a cover, but the album already had a running theme and I didn’t want to have to write something new. It was a set project for me, it was finished, and I didn’t want to ruin it by adding something. There were a hundred ideas since the beginning, obviously, but those nine songs came out of the last four years. And the only reason it took that long was because Strapping was always busy, which is a pretty good excuse (laughs). Between being in Strapping and Zimmers Hole and being at home doing regular dude stuff it was pretty hard to get the Tenet stuff together. I couldn’t give it the full attention I wanted to until Strapping ended. That’s kind of when it really started.”

“Right after Strapping finished in ’06 I went straight to the studio to work on this,” Simon continues. “It was me and Glen and Adrian Erlandsson (Nemhain / ex-Cradle Of Filth) on drums, and we actually finished the record. I sang on it because it was my thing and I wanted to try it, and it sucked. I fucking suck as a vocalist. So Century Media tried to help me find a singer. Adrian, meanwhile, wasn’t happy with what he’d done either, and he told me he’d feel better if I went somewhere else for drums because he didn’t feel he could give Tenet his full attention. We ended up re-doing the whole album, which is another reason why it took so long. That didn’t really start until last year, and 2008 was a terrible year for me. I lost my stepmother to cancer, my wife battled cancer and thankfully won, and a bunch of our personal friends just started to drop, so I was in shellshock for all of 2008. I couldn’t really get my shit together until the beginning of this year, which is the reason for all the delays in getting the record out.”

Once in the studio, however, were there ever any moments where things began to sound too much like a Strapping Young Lad or Zimmers Hole production? It’s fair to assume that putting the Simon / Hoglan / Stroud triumvirate back into action would yield similar material, forcing the band re-think the songs before calling them finished.

“No, never, because this is purely me from a writing perspective and there’s no outside influence at all,” says Simon. “That was never a factor me, and I don’t think that what I write sounds like Strapping or Zimmers Hole. I’d like to think that you can hear how I contributed to those other bands by listening to the Tenet record. I’m the chief writer for Zimmers Hole so that’s kind of a no-brainer, but what you’re listening to with Tenet is probably what I brought to the Strapping table. This album really is me, and that’s not from an ego perspective, it’s a fact.”

“I’d be a liar if I said I wasn’t influenced by the bands I’ve been in,” he adds. “I’m sure there are some Strapping influences on the album. I can’t pick them out but if you tell me you hear it in a passage somewhere, fucking cool. What this really says is that I’m a 45 year old thrash dude and that’s what I like (laughs).” 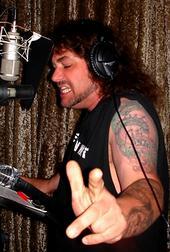 The icing on the Tenet cake – or the razor blade inside it depending on how his voice hits you – is former Exodus singer Steve “Zetro” Souza. His performance on Sovereign brings new meaning to the term “over-the-top” in that you half expect his unique high pitched vocal sneer to become maniacal laughter or nut-house shrieking at any given moment. Simon couldn’t be happier with his choice of a frontman.

“Glen recommended him so we gave him a call, and when I heard Zetro’s vocals I knew that was it. You don’t think his vocals are just okay, either; you either love his voice or you hate it. I love ‘em. He’s got such a character voice and it’s definitive whether you like it or not. He doesn’t sound like anyone else, which is really cool for me.”

Regardless of how well Tenet goes over with the fans, Simon’s SYL past will always be part of the equation. He accepts it, just as he accepts the fact founder / frontman Devin Townsend had to bring Strapping Young Lad to an end for his own well being. And although he misses the SYL machine on occasion, Simon is happy to be able to move on.

“I can’t say things are better because Strapping was my life for many years, but… it’s hard to say. I’ve got a family now, and having Strapping really grounded me in a way. I’ve had some time to find myself and figure out what the fuck I’m doing because we were on that rollercoaster for over a decade. I’d like to think that Tenet is a result of me being able to stop and focus on what I want to do rather than being part of a machine that just fucking eats ground (laughs). I look back on it with fondness and part of me wishes it was still going, but there’s another part of me 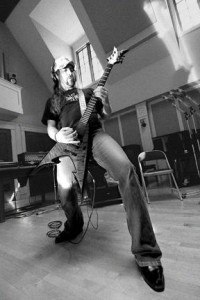 saying ‘Thank God that ended…’ because I really needed to find myself. It’s given me a chance to focus on what I want to do and to get my feet back on the ground. And I’m a dad now, which is just huge for me. If I was on the road all the time now I think I’d be pretty miserable.”

“Me and Devin don’t stay in frequent contact but we do write occasional emails – we’re both dads now, so we have something that’s cool in common – and he seems happy, which is enough for me.”

As for Zimmers Hole, the band is still alive and kicking even though their last album (When You Were Shouting At The Devil… We Were In Leage With Satan) failed to perform as well as expected. If anything, Tenet has rekindled Simon’s and The Hole’s interest in getting back to business.

“That last album, which we thought was spectacular, never really did anything which bummed us out,” Simon admits. “We decided to walk away for a while so we’re all doing our own things, but it’s funny because we all end up back together somehow (laughs). I don’t think that’s ever going to change. It’s like, when I went to Gene for the drums on the Tenet album it was like going home. No disrespect to anyone else, but that felt good. I just started writing for Zimmers Hole, so I’m feeling the love again and the other guys seem to be feeling it, too. So we’ll see how that goes. I’m not going to rush it because we’ve never been under anybody’s hammer. We do it when we want to. But, I’ve got some good ideas and I’ve got plenty of room to do multiple bands. I have no problem multi-tasking (laughs).” 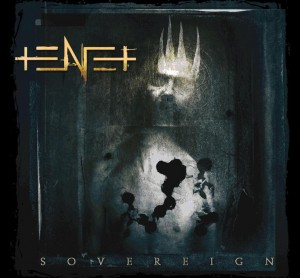