(Please note: If you have no idea who the Misfits are you might want to click here for a history lesson. It’s significant to what you’re about to read…)

As mentioned in Part 1 of this interview, Joel Gausten’s accomplishments as a writer go hand-in-hand with his conquests as a musician. He lays claim to having performed and / or recorded with Pigface, Electric Frankenstein, the Misfits and The Undead and has been forced on occasion to defend those claims – for the record, successfully – particularly with regards to the Misfits. Gausten raised the ire of their fans in early 2009 by posting what he said were bootleg rehearsal recordings featuring himself on drums on his MySpace page, with many of the discontented pointing out that Gausten was never a member of the band. That said, how dare he suggest he performed with the legendary horror punk outifit? The Misfits had been around since the 1977. Gausten was clearly blowing smoke; as if he’d been kicking back with the band at the age of 12…

“(Laughs) Pretty close; I was 17, and that was just another happy accident. It was 1996 and there was actually a scene for a 17 year old punk rocker. I was into it full force. Being in New Jersey at that age, you couldn’t not love the Misfits because they were the quintessential punk band. At that point in time they hadn’t reformed yet, and there was this whole wonderful mystique about them because they hadn’t been around. If you were a kid in New Jersey in those days and you went to a record store and saw a poster of Doyle (guitars), that was a very cool thing because we all loved the Misfits. Being the rambunctious pain-in-the-ass that I am, I was booking some shows that were doing pretty well, I thought ‘Why don’t I find the Misfits and have them reform?’ (laughs).”

“The thing is, when you’re dealing in independent books and music, you cannot be afraid to hear the word ‘no’ because eventually somebody will say ‘yes.’ It’s like, if the worst thing those guys can do is say ‘no’ I can still get up in the morning.”

“At the time I had a buddy who worked at a music store in the area, and he was actually Doyle’s guitar tech. I ended up getting Jerry’s (Only / bass) home phone number, and I think it was on a Tuesday that I called around 10:30 at night. The phone picked up and there was this massive sound: ‘HELLLLLLLLOOOOO!!’ (laughs). I introduced myself and explained what I was calling about, and he told me that they were actually getting the band back together but they didn’t have a drummer. Naturally I said, ‘Well I’m a drummer…’ He asked me what I knew of the band’s music and I told him: ‘Everything.’ I mean, what else am I going to say to the guy? His response was ‘Okay, seeya Saturday.’ So, I spent the next three days learning as many Misfits songs as I could (laughs).” 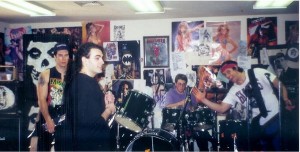 “I showed up and auditioned for them; I sat behind Robo’s drum set, which was massive, we jammed and it sounded great. At that point in time, because of my age they didn’t feel it was appropriate or safe for me to have me on board. At 17 I was bummed, but at 32 I understand why, and I thank them for that because I’d probably be dead by now had I gone ahead with them (laughs).”

“What happened was… Jerry was always there, rehearsing three times a week. He was the ringleader of the whole reformation of the band. At the time they sort of had Dr. Chud (drums) in the band, but I had the sense he wasn’t taking it too seriously. I don’t know; you’d have to ask them about it. He was doing sound and their primary concern was auditioning singers, which made sense because they were replacing the definitive punk rock singer (Glenn Danzig), and because Chud was recording the auditions they needed somebody to keep the beat. They told me they liked my style, they knew I could play drums, I lived very close to where they rehearsed, so they asked me ‘Why don’t you come up here after school three times a week? It’ll help you become a better drummer and it’ll help the band out.’ I was like, ‘Fine!’ (laughs). So, for five or six months I’d go up there after school, we’d do maybe 30 songs a night. Pretty much everything I could think to learn.”

“The story gets even weirder,” Gausten continues, “because when these people came up for their audition they’d get a cassette tape of it as a thank you. So even if they were horrendous – which most of these guys were – they’d still get the audition tape that Chud had recorded. Whether it be by design or accident these tapes hit the bootleg market overnight. The funny thing is, around 2006 I got an email from a buddy I hadn’t heard from in years saying that he’d gotten a Misfits bootleg: ‘Supposedly it was recorded in 1995 and it says you’re on it. Is that true?’ I told him it was a very good chance I was on it because I was there. He sent it along and it was me on the tape; a full length bootleg, and I started posting little excerpts of that up on another MySpace page I had. For no other reason than it was just sitting there.”

“I was actually the drummer for (former singer) Michale Graves’ audition. That tape hasn’t turned up, but I’m the drummer on it.” 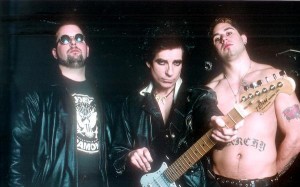 Gausten’s current musical activities include a new Undead EP with ex-Misfits guitarist Bobby Steele entitled I Made A Monster, a new full length Undead album due to be released in 2010, and an industrial project with his fiancé Shannon Gardner under the banner Effectionhate. Again, Gausten came under fire for claiming to have been working extensively with The Undead even though he didn’t appear on any recordings save for the Halloween EP (2007). In actual fact, Gausten and Steele have been working together since 1998.

“I was just tinkering online a bit and I came across Bobby Steele,” Gausten says of his Undead relationship. “I introduced myself and mentioned that I’d worked with Jerry and the Misfits and that I was a big fan of his as well. We met up at an Eerie Von show and kept in touch from there. Obviously there was some politics between him and Jerry, but I was fortunate enough to be able to lay down the rules and let them know that I base my opinions of people on personal experience, not what I’m told. Once that was cleared up Bobby and I stayed friends, and I’ve been his drummer off and on for 11 years.”

It’s worth noting that with Gausten’s rise to being almost famous The Undead has received a decent amount of online coverage over the last year or two.

“That’s because The Undead’s drummer is now a publicist,” laughs Gausten. “This is the world I live in.”

With regards to Effectionhate, Gausten says the project is taking shape slowly but surely as it moves from the basement to something resembling a band.

“It’s more Shannon’s thing,” Gausten admits. “She’s been toying around with music for a couple years, and what’s fascinating about her work is that she’s a complete amateur musician and comes up with some pretty amazing stuff. Right now it’s a studio project. Our goal is to take it one step at a time. We want this to grow very organically. It’s already gone from the random sound ideas created in her home to bringing in other musicians, which will be announced as things develop. We’re just taking it as it comes. Shannon is the brains behind the whole thing, though. I am but a mere accessory (laughs).” 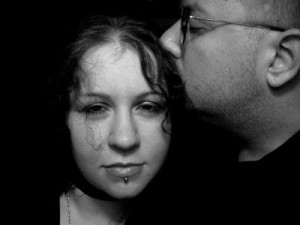 Go to this location for more information on The Undead’s new EP, I Made A Monster. Click here for Effectionhate audio samples.