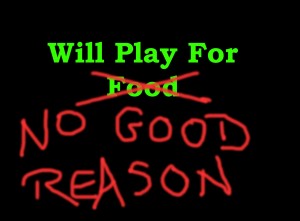 Creativity is a wonderful thing. Whether it’s writing prose or poetry, painting, music, putting little bottles in little ships in bottles, being able to take a thought or an idea and bring it to life is impressive and quite often an inspiration to others. It is not, however, an exact science. Not everyone has the ability to create and succeed. Not everyone should take a stab at 15 minutes of fame, or even 15 seconds. YouTube offers more than enough proof of that.

I recently discovered the negative truth about creativity and inspiration first hand. Nineteen minutes of gut-churning tongue-biting agony served up from the back of a bus by the Three Stooges and an acoustic guitar.

For the record, I love acoustic guitar. My focus may be on metal a lot of the time, but like any open-minded metalhead with taste that goes beyond what’s in his / her mouth I have an appreciation for anyone who is able to play an acoustic guitar. Classical, flamenco, blues, folk, cover songs, solo, with a band… doesn’t matter. I enjoy the nuances of the music that pours out of the instrument and its player when it’s done well, I can appreciate the effort made by those less skilled, ultimately making me want to be a better player myself.

And then there are those that dare who send the phrase “Know your limitations” tearing through my brain.

Ironically, my journey through hell took place on the way to the Paganfest in Nuremberg, Germany; a six band metal smackdown guaranteed to scare the pants off anyone with leanings towards country, techno, big band, hip hop and anything else distortionless. Forty minutes prior to doors I grabbed a bus from the nearby station, prepared for a harmless 20 minute ride to the venue; a trip I’d made dozens of times before. I thought nothing of the three teenage guys – somewhere between the ages of 14 and 16 – sitting at the back noodling on an acoustic guitar, figuring they were just amusing themselves as they waited for the bus to get moving.

I quickly realized that the trio was dead serious about their playing, which wouldn’t have been a bad thing had they been any good. It became readily apparent that their “skills” were severely limited as they passed the guitar around arguing over how a certain song (unknown to me) should be played. It didn’t help that the guitar was a cheap piece of fiberglass crap the colour of Habitant pea soup outfitted with nylon strings, looking and sounding as if had been purchased at Wal-Mart and tuned by someone with a hearing-ear dog. In a word, fucking horrible.

(There are music purists that find the practice of melding folk music and metal offensive. I guarantee you, those same people would have run screaming to the Paganfest with me for salvation).

Gritting my teeth, I decided to endure the noise figuring the rumble of the bus engine would drown them out once we got going. Not so. The kiddies’ mission continued without interruption, much to the chagrin of everyone on board. A mission that consisted of playing the opening riff of some cheese ass pop song over and over and over before venturing into the realm of G, D, A and C chords performed with the hands of a crippled blacksmith. Making things infinitely worse was the one little splooge singing along in a wimpy falsetto, through the back of his throat and out his nose like a toddler with no concept of tune.

The only thing that stopped me from marching over and converting the guitar into a hat for one of the gentlemen was a conversation I’d had with The Girlfriend earlier in the day. She’d mentioned it would be nice if I’d tone down my natural tendency to jump into negative situations and raise hell, perhaps ease off and be more tolerant of people and their assorted idiot behaviour when I found it offensive. With that in mind I forced myself to breathe deep and keep a firm hold of the steel bar above my head lest I break someone’s fingers. One at a time. Slowly.

People have been known to grind their teeth to the roots in their sleep over several years. I managed to do it in 19 minutes, figuring one of the other passengers would say something to the budding popstars. If not them, surely the bus driver casting evil looks in his rear view mirror would get up and put an end to my misery. Evil looks that were wasted considering Huey, Dewy and Screwy had their backs to him, concentrated as they were on their pow-wow.

I was reminded of something I learned many years ago, a sweeping generalization that may be deemed unfair but proved to be divine truth this day: In Germany people will ignore a problem expecting it to go away on its own. Not everyone, of course, but this is the unofficial general rule of thumb. I believe problems should be dealt with directly rather than hiding one’s head in the sand, although the fire and brimstone approach isn’t recommended for everything. In this instance, however, it was most certainly required.

By the time I’d decided I to take matters into my own capable hands I had almost reached my destination. It made no sense to raise a stink only to get off the bus a few moments later, thereby being unable to enjoy the silence, but my natural “If It Bleeds I Can Kill It” mentality in high stress You’re A Moron situations demanded I act.

“Tell me something,” I said as I stomped into the Wannabe Lounge. “Do you guys know any other fucking songs?”

Then, wouldn’t you know it, Guitar Boy #2 piped up: “Uh, yeah. What’s it to you?” Typical kiddie arrogance that desperately needed to be taken down a notch.

“Maybe you should play one of them, because you SUCK at playing that one. It’s not even a fucking song. It sounds like you’re killing it.”

The extended silence and shellshocked looks were worth it.

The guitar was lowered in defeat, and in that moment I realized I may well have dashed The Trio’s hopes and dreams of hitting the big time. I like to think that at the very least I saved their neighbourhood from a garage band nobody needs.