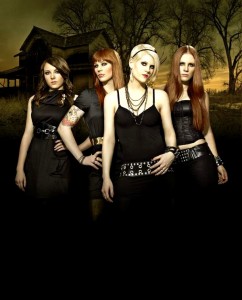 “This is the album we always wanted to make,” states Mercedes. “With the last record, I think the songs were there but the production wasn’t. It was pretty fucking bad production. Every album we’ve done we’ve used analog tape, but it wasn’t the analog that was the problem on Funeral For Yesterday; it was the way we recorded it. We didn’t have a lot of say in it and it didn’t turn out the way we wanted it to. This new album, we did it blind with nobody sticking their fingers in it. We did it by ourselves.”

“We find that people always want to change us,” she adds, referring to assorted industry personalities Kittie have encountered over the years. “It’s been a struggle because people have always said ‘You should do this and that and that…’ but we don’t want to be anything different than what we are right now. That should be quite apparent because we went off and did this record ourselves, and look how it turned out.” 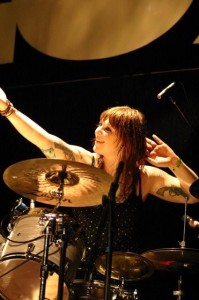 Mercedes’ disdain for Funeral For Yesterday is unexpected in that it was the strongest album of their career at the time. Certainly the most dynamic. During the initial promo run she and Morgan both agreed it overshadowed the vast majority of their work up that point, suggesting now that they’d more or less forced themselves to make the best of the album, grin and bear it.

“Exactly. There wasn’t much we could do about it, but shit happens. Sometimes things don’t turn out the way you want them to and that was definitely the case with Funeral. When you hear those songs live in comparison to the way they’re recorded it’s like night and day. We’ve had so many people come up to us and say ‘I really like that album, but when we you guys play live those songs sound amazing.’”

Funeral For Yesterday was an independent release, adding to Kittie’s headaches. A legal battle with former record company Artemis Records led to the Lander sisters forming their own label (X Of Infamy) for the release, meaning they had to wear every hat in the closet in order to make Kittie work as a band and a business.

“That’s true,” Mercedes agrees, “and it was very difficult for us because you can only do so much on that level. We tried it and it didn’t work out the way we wanted it to, so here we are with E1 for In The Black. Now we have a good label that does their job and we don’t have to tell them what to do, which is kinda nice. It’s nice to be at a label where people on your side, and it’s nice to hear ‘yes’ a lot (laughs).”

Sadly, the Lander sisters lost their father in August 2008 when he suffered a heart attack. David Lander also acted as Kittie’s manager, and as a friend and supporter of BW&BK we knew him as the anchorman for his daughters’ art. That Kittie were able to tour and record a new album so soon after such a tragedy is nothing short of astounding.

“We had so many things booked before that happened,” Mercedes explains, “but it was very difficult because he did so much for and with the band. It was one of those things where if we’d stopped we would have stopped for a long time. For us it was best to keep the momentum going. It felt right to be doing it at that time and given when we did it, it was surprisingly a lot easier than you might think. It kept our minds off things, and at the end of the day I think it really helped us. Making the album was therapeutic, for sure. We had songs that were finished before that whole thing happened, so it was definitely helpful to have something focus on.” 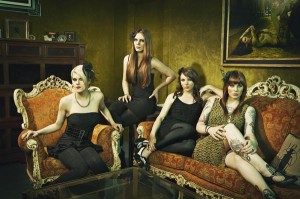 In The Black continues the band’s Spinal Tap-ish tradition of changing bassists with every second record. Ivy Vujic has replaced Trish Doan, who was forced to quit due to an ongoing battle with anorexia. While the album was written primarily by Mercedes and Morgan, the ladies credit guitarist Tara McLeod and Vujic for making In The Black a full-on metal record.

“I’d say about have the songs were done before Ivy joined the band. Morgan and I always kind of work together on the music. We’re connected at the brain so we write songs pretty much the same way. The last album was just Morgan and I, so it was really nice this time around to have Tara there for a lot of the writing sessions. She had some input, which was awesome, and she’s a great lead guitar player so that added a whole new dimension to the songs. When we were recording, all of the bass lines that Ivy wrote ended up being so dynamic. They’re the best bass lines we’ve ever had for our music.”

“As for sounding more metal on this one, honestly, it wasn’t a real sit down discussion kind of thing. It was more a case of us just being so pissed off. We’ve been through a lot over the past couple years, and obviously if our collective mood as a band isn’t happy-go-lucky it’s going to come out in the music. We’ve endured a lot of fucking hardship, a lot of really shitty things have happened to us, so we wrote a really angry album. But at the same time there’s a light at the end of the tunnel.”

Which brings discussion back to the way In The Black was produced. Funeral For Yesterday could have and ultimately should have been heavier. This time Kittie got what they wanted by, as mentioned, taking matters into their own hands. 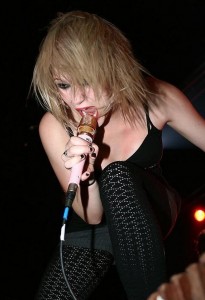 “I think it’s a case of nobody ever heard the music like that,” Mercedes says of Kittie’s “new” metal sound. “I think this is the first time we’ve had really good production on an album. I’m not saying we spent a whole lot of time worrying about that, because it only took us three weeks, but I think this is the first time we hooked up with a really good producer that knows metal. The guy who did the record, Siegfried Meier, was third engineer on the Oracle album, which is the only other record that I like (laughs). Point being that this is the first producer we’ve worked with that knows metal and knows what we want to sound like. He said he could do that for us and he did. This is the first album that we’ve recorded that I’m totally happy with.”

In The Black heralds the return of Morgan’s growls, which took a back seat on Funeral For The Yesterday to the point that it falls just shy of being worthy of a place in Bif Naked’s catalogue. Her performance is much stronger this time out, dirty or clean, with her growls taking on multiple personalities as things play out. Mid-album track ‘Forgive And Forget’ is Morgan’s crowning glory for this outing, a multi-faceted metal anthem unlike anything she’s done before vocally.

“Morgan and I both write lyrics and melodies, but on this album I don’t think there was a whole lot of production on the vocals,” Mercedes offers. “What you’re hearing is Morgan’s raw voice. It’s not over-produced like on the last record, which has six million harmonies on every chorus. It made her sound like a fucking Chipmunk at the end of the day, which was ridiculous. On this album what Siggi wanted to do… his actual words were ‘Morgan is a diva, so she needs to just sing.’ He just let her do what she wanted to do, they did a couple takes for each song and that was it. He didn’t fuck around with the vocals.”

The next step for Kittie is extensive touring for In The Black, the more the better. A task made significantly easier compared to the last several years because they have a label to fall back on for support, giving rise to the suggestion that a live album would be appropriate in a year or so.

“We were thinking about it, and I guess it’s something we need to do,” says Mercedes. “There are so many things we have to do, and we finally have a label will let us do fun things like that. The plan is to go out an tour as much as we can, of course, but my thing is getting more support tours. I mean, 10 years of just playing to the same audience is… there are whole bunch of 14 year old kids out there that don’t even know we exist. When we put out our first record they were four (laughs), so there’s a whole new audience out there that we haven’t even touched. I want to get to them this time out.” 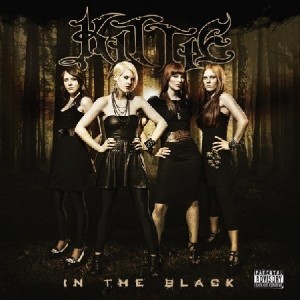 Go to this location for audio samples from In The Black.