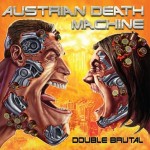 As I Lay Dying girlie man Tim Lambesis’ shred-happy Ode To Arnold continues, picking up where Austrian Death Machine’s 2007 debut Total Brutal left off. More of the same out-of-control Suicidal Tendencies mile-a-minute Slipknot skate punk glorifying Mr. Schwarzenegger’s cinematic career, all tied together by grin-worthy between-song banter provided by Josh Robert Thompson. Call it the thrash version of a Conan O’Brien skit gone mad guaranteed to muscle the funnybone of anyone with a background in Arnie, bottom line being you can’t in all fairness carve on something done in the interest of having a bit of fun with the noise. And Lambesis is having a riot. Lead track ‘I Need Your Boots, Your Clothes, And Your Motorcycle’ is one of the ADM’s strongest songs to date, showing off his head for dynamics within the mayhem (he writes, sings and plays almost everything except for the solos), something that has been improved upon since the debut. ‘Who Told You You Could Eat My Cookies?’ sits at the other end of the spectrum, all piss and vinegar and Machine Head-ness. Fave tracks of the moment, however, are the Pumping Iron tribute ‘It’s Simple, If It Jiggles It’s Fat’, the Mr. Freeze-inspired ‘Allow Me To Break The Ice’, and ‘Conan, What Is Best In Life?’, which closes the first disc with the finesse of a truck kissing a brick wall.

Lambesis is no dummy and kept disc 1 short and sweet (30 minutes), leaving him room for a second CD of eight covers featuring songs that have appeared in Schwarzenegger movies. Sounds like he’s reaching, but in actual fact he manages to upstage himself. Opening dialogue ‘Intro To The Intro’ is a keeper, followed immediately by a take on the Terminator 2 theme music before breaking into several classic metal tunes played straight with growling vocals and scattered contributions from Ahhnold. The results are brilliant. Metallica’s ‘Trapped Under Ice’ has been given a new set of balls, Judas Priest’s ‘Hell Bent For Leather’ is a nicely depraved update, and the rendition of Megadeth’s ‘Killing Is My Business… And Business Is Good’ is a welcome reminder of just how cool the original song was all those years ago. The updated version of Agnostic Front’s ‘Gotta Go’ closing disc 2 is the kicker though, featuring an intro sung by Ahhnold himself before turning into a Suicidal Tendencies-driven bullet train.

To the best of my knowledge I’ve never heard an As I Lay Dying song. I dismissed them as just another New Wave Of Cookie Monster Metal band guaranteed to get 16-year-olds hot and aggressive, but given Lambesis’ creative streak within the realms of Austrian Death Machine I’m considering giving the band a shot to see what he does for a day job. As for ADM, I can’t realistically see him getting more than one more album out of the Schwarzenegger Chronicles. More power to him though, and here’s hoping he can somehow convince the real deal to make a guest appearance between Guvernator duties next time out.

Fave tracks: ‘I Need Your Boots, Your Clothes, And Your Motorcycle’, ‘Who Told You You Could Eat My Cookies?’, ‘Killing Is My Business… And Business Is Good’, ‘It’s Simple, If It Jiggles It’s Fat’, ‘Trapped Under Ice’, ‘Conan, What Is Best In Life?’, ‘Gotta Go’