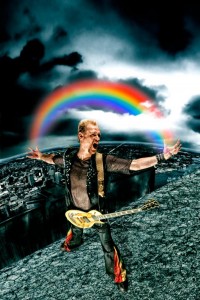 I recently caught up with guitarist / producer Fredrik Nordström, who continues to slug it out with his band Dream Evil in between production jobs. Always a fun interview, we recently got the chance to play catch-up and discuss the band’s new record In The Night. I also asked him about his new and rather unique stage name, Ritchie Rainbow, which fits if you know the man’s warped sense of humour. An excerpt is available below.

Nordström: “I think many people are like me when they listen to music; they don’t give a lot of attention to the lyrics. I mean, on this album we have ‘The Ballad’, and I’ve played it for people and they don’t laugh because they don’t understand that we did it in fun. People don’t understand that sometimes we do this just to have a fucking laugh. This is something in the band, though, where we don’t do funny lyrics on purpose. They just come out that way. For example, I wrote all the music and vocal melodies for ‘The Ballad’ and I brought it to the guys saying that I thought it had hit potential, then gave it to Niklas so he could write the lyrics, and what you hear is what he came up with. I was laughing my ass off.”

“Every time a new member comes into the band we force them to take a stage name. Peter (Stålfors), he calls himself Pete Pain, but his real name is Baldy Bass. I had that name for him and I told him it was brilliant, which it is, but he was saying ‘No! No!’. I told him ‘Of course you’re Baldy Bass; you’re bald and you play bass. You can have a skull on each shoulder and look evil that way…’ So yeah, it’s an ongoing war in this band. But the picture of Baldy turned out really well, though.”

Check out the complete interview here. 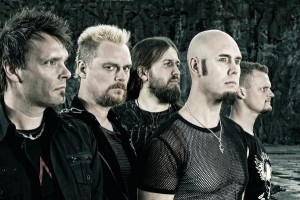