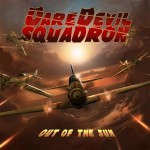 As if in response to all the New Wave Of Wannabe Soilwork Death Metal bands that spent most of the last decade running amok, educated old school no-nonsense rock ‘n’ roll has resurfaced in recent years to an unexpected degree. Never mind the (warranted) Chickenfoot hype and the fact that Airbourne are allowed to exist in spite of being an illegitimate beer swilling bastard cousin of the AC/DC franchise right down to the Australian postal code. Quality acts The New Black, David Chastain’s Southern Gentlemen and new-era Sinner have earned themselves some well deserved mileage by keeping things simple, concerned far more with having fun with the music rather than bludgeoning folks into submission with their oh-so-righteous aggression. Add the bare-bones DareDevil Squadron to this growing list, an act that has learned their Thin Lizzy and Iron Maiden lessons well to the point that they see nothing whacked about combining the two. Kinda surprising how well they pull it off actually, with ‘Out Of The Sun’ amounting to ‘Aces High’ for Hazzard County locals while ‘Forgotten Son’ and ‘Streets Of Montmartre’ sport more melodic guitar leads and galloping rhythm tracks than the last two Maiden albums combined. Beyond that it’s all Lizzy-flavoured good time booze tunes – see ‘Back Lounge’ and ‘Lillian’ – reminiscent of the classic and equally underrated self-titled Vanderhoof debut from 1997 (featuring Metal Church guitarist Kurdt Vanderhoof). Fans of the Trans-Siberian Orchestra may lock onto DareDevil Squadron based on guitarist Angus Clark being part of the equation, but anyone looking for a symphonic high would be better off investigating Epica’s latest outing. Out Of The Sun is gritty garage rawk, the kind of stuff that made the ‘70s magic and gave ‘80s hair metal a foundation. One of those welcome listens when I don’t want or need bells and whistles screwing up the experience.

Out Of The Sun is now available via iTunes here and through CDBaby.com at this location. Audio samples are available on the page and on the band’s official MySpace page.