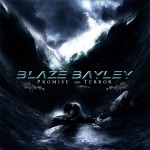 For the record, I was one of those people that bitched and screamed and wondered what the hell Blaze Bayley had done to my Iron Maiden when he stepped in to replace Bruce Dickinson in 1995. Never mind that Steve Harris had slammed head first into a writer’s block and couldn’t pen his way out of a paper bag at the time; as the new pipes in the Church Of Ed the unfortunate Bayley took the lion’s share of abuse for The X-Factor and Virtual XI. The fact he’d torn up some decent stretches of road in fine fashion with Wolfsbane prior to his tenure didn’t help matters. His firing from Maiden in ’98 was a blessing in more ways than one, however, because from my first time through his Blaze debut Silicon Messiah in 2000 Bayley came off as a talented, driven and even charismatic vocalist. The very last thing his detractors had expected. He’s held the course for the past decade, through five “solo” albums and a swamp of professional and personal issues, leading him to put out the finest work of his career thus far on Promise And Terror.

The album is Bayley’s emotional journey – his words – forced upon him by the sudden death of his wife in 2008. It’s a dark outing, particularly the last half of the 11 song romp, but he and his bandmates prove that soul searching under such circumstances doesn’t have to be a depressing affair. Lead-off track ‘Watching The Night Sky’ is a sophisticated ass kicking in the direction of his Maiden-era ‘Man On The Edge’ (looking forward to hearing him pull off those long notes live), and the record continues to barrel forward with classic Helloween abandon on speedsters ‘Madness And Sorrow’, ‘Faceless’, and the dynamic-pumped ‘God Of Speed’. In trademark Bayley fashion these songs are stacked up beside mid-tempo, basement groove monsters like ‘1633’ and ‘City Of Bones’. Mid-album track ‘Time To Dare’ closes off the first part of Promise And Terror and launches a four song conceptual piece featuring Bayley baring his soul in the wake of personal tragedy. It’s quite the journey, on par with Kamelot’s ‘Elizabeth’ trilogy in terms of atmosphere, easily crushing the overblown “epic” approach of Maiden’s last album, A Matter Of Life And Death. It may be best described as the four act version of the Blaze classic ‘Stare At The Sun’ from Silicon Messiah, considered by Bayley himself to be one of his best songs.

It’s worth noting that in spite of the too-numerous-to-count line-up changes since the Blaze debut Bayley has managed to develop and refine a signature sound. A mark of his new band’s (as of The Man Who Would Not Die from 2008) talents and understanding of what’s required, and proof that we severely underestimated Blaze Bayley the singer / songwriter way back when.

Go to this location to purchase Promise And Terror. Click here for my BW&BK interview with Bayley.

One thought on “BLAZE BAYLEY – Promise And Terror”