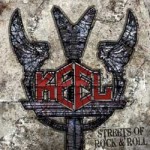 Second-tier hair rockers Keel pretty much fizzled out after their self-titled fourth album from 1987, not even the sign-of-the-times high rotation ‘Somebody’s Waiting’ video and a Bon Jovi support tour able to muster a “Hell Yeah!” from folks outside the band’s loyal fanbase. Frontman Ron Keel and guitarist Marc Ferrari have been kicking around ever since, there have been understated returns to Keel territory (Larger Than Live in ’89 and and Keel VI in ‘98), but Streets Of Rock N’ Roll is the band’s first real noteworthy sign of life in over two decades. Playing on the fact the band struck their loudest chord with second album The Right To Rock, the new outing is dubbed a 25th Anniversary comeback but only hints at the old days beyond the classic line-up minus one. Diehard fans can forget hearing Ronnie’s trademark ‘Speed Demon’ howl, and all traces of reverb-pumped ‘You Think You’re Tough’-era Ratt metal have been traded in for a straightforward simmer-to-boil-and-back rawk direction. Not a bad thing if you’re willing to go in with an open mind.

Streets Of Rock N’ Roll is a stand-alone package within the Keel catalogue, coming off as the lost Bon Jovi rock album – minus the whining sap – that should have come after Keep The Faith. Heavy moments reminiscent of Keel’s heyday include ‘Come Hell Or High Water’, ‘Hit The Ground Running’ and ‘The Devil May Care’. On the other end, ‘Streets Of Rock N’ Roll’, ‘Looking For A Good Time’ and ‘Live’ will be instant faves for any New Jersey-loving fans left out in the cold for the last 20 years. A classic blast-from-the-past moment is served up with ‘Gimme That’, a ballsy pounder proving that Warrant’s ‘Cherry Pie’ didn’t have to suck. Well done.

Unfortunately, in a move that amounts to a boss-inflicted bullet wound, the label chose to issue Streets Of Rock N’ Roll and re-release The Right To Rock simultaneously as a celebration of Keel’s return. It would have made a hell of a lot more sense to let the new record breathe a little, as anyone listening to RTR first / again that’s expecting the band to blow the doors off in similar fashion on Streets will invariably be left disappointed. The new album is a grower and deserves better. Here’s hoping the fans have matured to the same extent as the band.

I have to admit, however, that my inner ’80s rocker finds worth in lighter fare like ‘No More Lonely Nights’, solid closing track ‘Brothers In Blood’ (which, in retrospect, isn’t that tame after all) and ‘Live’.

Go to this location for information and links to purchase Streets Of Rock N’ Roll and The Right To Rock.