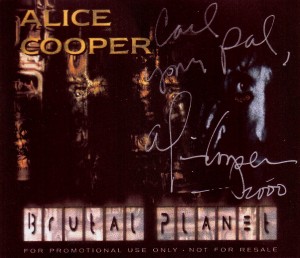 I don’t usually get nervous before doing an interview. Fact is I’ve been doing this long enough that I know more or less what to expect going in, and I know what’s expected of me by my intended victim (something many newbies definitely need to learn). It has nothing to with being jaded or the shine on my choice of career having faded; I just happen to be very comfortable with what I do and I’m happy in this particular comfort zone.

There have been moments of nervousness and uncertainly of course, ranging from “I’m so over my head” to “I am SO going to die sucking” depending on who the interviewee happened to be. My very first interview was a phoner with the beautiful Michelle Meldrum, guitarist for Phantom Blue (may she rest in peace), a gut-churner due to the fact I had no idea how I was going to lead a conversation with a hot woman even if she was on the other side of the continent. I was a social car crash when it came to women…. as opposed to my present day status of being mildly inept. It’s an experience I’ll never forget because I not only survived, but she made me feel like a million bucks when all was said and done. Interviews with Rob Halford, Ronnie James Dio and Bruce Dickinson came with a prerequisite dose of the shakes because of who they are and what they represent, but in every case my fears of sticking my foot in my mouth or having a brainfart were unfounded. All three of them were gentlemen to the core yet very easygoing, making my job a hell of a lot easier than I ever would have expected.

In 2000 I was offered the chance by a German rock magazine to interview Alice Cooper for his Brutal Planet album. I’d been a fan of Cooper since seeing him on The Muppet Show as a kid, I loved the new record, so I took it without thinking twice. When the day finally arrived, however, I spent most of the train ride from Nuremberg to Munich kicking myself for agreeing to it. What the hell was I going to say to THE Alice Cooper? It felt like going to visit royalty knowing that combat shorts and a Dimmu Borgir t-shirt aren’t exactly appropriate for a black-tie dinner.

It wasn’t like I was faced with interviewing someone with a reputation for Axl Rose-esque tantrums or a well documented disdain for the press. I’d heard rumblings about the man having a TV on in every room of his house and not being too cool on folks asking him how he got his name, but nothing to indicate Cooper was a surly just-don’t-give-a-damn diva. It was the same guy, however, that had pushed me in the direction of metal and all the mayhem it had to offer, the guy I hung out with along with half of Toronto on New Year’s Eve ’89, the soundtrack for summer camping trips to Algonquin Park…

(I recommend the Love It To Death and Welcome To My Nightmare albums for long weekend trips into the Canuck wilderness with your buddies, beer and Kraft Dinner. Always a good time, although folks in the neighbouring campsites may have issues with 3:00am Molson Canadian-inspired singalongs of ‘Steven’ and ‘The Ballad Of Dwight Fry’).

And there was that Muppet Show appearance (‘Welcome To My Nightmare’, ‘School’s Out’) branded on my brain as one of the coolest things I’d ever seen as a kid. Thank you, YouTube.

Upon reaching the hotel I was informed by Cooper’s label rep that I had 15 minutes for the interview. I’d travelled over an hour-and-a-half out of my way to talk to the guy for 15 minutes? That punched a hole in my nerves for a bit, but they came back in a tsunami outside Cooper’s hotel room door. What in the fuck was I going to say to the guy? Thinking back now, I figure my mind was as blank in that moment as Paris Hilton’s is when she’s faced with momentous decisions like “left” or “right.”

There’s no question I was just another face to be forgotten two seconds after I was out of the room, but in the 15 minutes I had at my disposal Cooper made me feel like our conversation mattered. Dressed in track pants and a t-shirt, one eye on the TV as we settled in, he welcomed me into his world for a few precious moments. We talked music, the state of the world and its effect on Brutal Planet, and even got into his not-so-complimentary thoughts on people asking him some 25 years after the fact how he got his name. In retrospect I suppose I should pat myself on the back for pulling off an interview that had Cooper laughing and offering anecdotes of his own… and I will for a long time to come 😉

In the end I came away with an excellent interview, but as starstruck as I was I completely forgot about my camera and what it was supposed to be used for. Amazingly, I did have the presence of mind to ask him to autograph my dog-eared copy of Brutal Planet. The only reason I managed to get the request out is because Cooper proved to be a very warm and welcoming human being in spite of the mystique that filled the room.

The story was printed in German a few weeks later (and is due to be resurrected in English on these pages soon enough). I was paid ridiculously well for the piece, but the value of the experience far outweighed the money that was burned up a short time later.