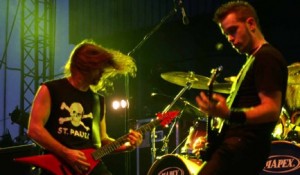 “It’s still the same thing in the studio, with me playing the guitars and Dave singing, but he’s the second guitarist on stage now. He’s a really good rhythm guitar player but his confidence is really low in that, so I’m trying to boost him up. I only sing live because Dave needs a break. That’s all it is. On the DVD for example, we’re standing quite stationary a lot of the time because we knew we were being filmed. If we weren’t being filmed professionally there probably would have been more mistakes and we would have had a bit more fun. Dave had to plant himself at the microphone and then back off to play, but he couldn’t go anywhere because he had to play some Waters riffs (laughs). But, I think he’s gotten used to that by now.”

“In the studio working with Dave is a lot different now,” Waters adds. “It’s not like, ‘Gee, I wonder how I’m going to get him to sound like this or that? How am I going to get him to not get angry and frustrated to the point that he storms off to the other side of the country?’ Now Dave flies in, grabs a tea, comes downstairs and sings a part with me for a verse, we record it and loop it so he can work things out, five minutes later he’s got the verse done. He goes upstairs and watched TV while I pick the best of the versions he’s done. Then we go again. It’s like we almost don’t need to speak to each other when we work.”

Between the Metal album from 2007 – which featured numerous gust musicians including Michael Amott, Jeff Loomis, Alexi Laiho, Danko Jones and Angela Gossow – and the live DVD fan expectations for the new Annihilator album are high. Waters isn’t concerned with the outcome.

“Sometimes the fans and the press will look at our records and take it so bloody seriously. They don’t realize we’re metal fans. We just go in and have fun with this, there’s no pressure. Thirteen albums? Who gives a shit? We’re not Metallica and we’re not a new band looking for a deal. We’re comfortable with every aspect of this whole thing and it’s an awesome place to be. We can do what we want; no label ever tells us what we have to do. If we make business mistakes, then we make a mistake. You make your own bed and you lie in it.”

“It was a lot of fun doing the Metal album but honestly – totally honest – it was just another record. You can’t have this pressure and stress where you say ‘I guess if this album doesn’t sell well that’s it for the band…’ or ‘I hope this thing makes a lot of money.’ We don’t think like that. For us it’s a big deal that we have the chance to make another album. We sit and look in the mirror and say ‘This is awesome, be grateful and enjoy the fucking thing.’ The only stress I have doing a record these days is whether I’m out of coffee or not. That’s the only way you can do this.” 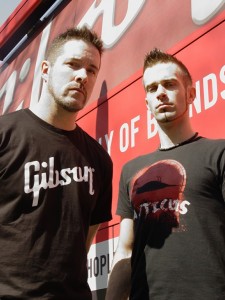 Go to this location to hear audio samples from the new Annihilator album and to support Canadian metal by buying it.

One thought on “ANNIHILATOR – In Command…”