Okay, the monthly round-up of what’s going on at home on the music front besides beer commercials during the Stanley Cup playoffs (as in hockey, our national form of relaxation). 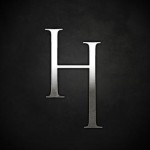 First off, former Scarlet Sins members Cristina Bishop (guitars) and Elie Bertrand ( drums) have resurfaced in Montreal with a new band called Harbinger. They’ve actually been piecing things together for a while now but they just love teasing the shit out of me, so they’ve been taking their time about it. The search for a singer is on but new music is already in the can, and in a fit of cool weirdness they’ll be making their live instrumental debut at the Cape Breton International Drumfest in Nova Scotia later this month. It seems Elie was invited to perform because organizers got word of her awesomosity, which eventually became a band engagement. So, for anyone attending (including the band), I have one word for you: YouTubeFootageDammit! 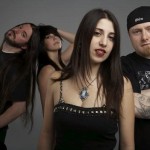 I recently became aware of the Ottawa-based band Doll – ignorance based on the fact I’m not at home a lot of the time – when word came down they’ve been tapped to open for Lacuna Coil in Toronto and Montreal later this month. Pretty entertaining stuff, particularly since there are supposedly some grunge influences mixed up in their music. Maybe it’s just my age and continued denial that grunge was ever considered a form of music, but I don’t hear it. Nope, for my money Doll is street level punk-inspired modern edge dirt metal. Or something like that. Wonderfully intense stuff on all levels; all bound together by some brilliant raw vocal performances. Watch for an interview coming to these hallowed pages soon, which will of course make it’s way to BW&BK.

You can check them out on MySpace here. The page includes a widget featuring all songs from their 2009 debut Inside The Dollhouse. 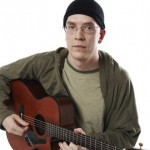 From the file Life’s Unfair Because I Wasn’t There… Dammit comes some sweet fan-filmed footage of Devin Townsend performing a free acoustic show in Redmond, Washington at the Soulfood Bookstore back on February 27th. The individual who shot it should be deified for the simple reason that only about 300 people were in attendance, and it featured Townsend solo (with some backing tapes, but he’s forgiven). Check out his performance of ‘Ih Ah’ from the Addicted record here, which will lead you to the other tracks on offer. Yes, this is the same man that invented sonic demolition as the head wrecking-ball in Strapping Young Lad. The musical middle finger was Made In Canada 😉

Finally, my good buddy The Rev has launched an official music page on Facebook here. The key word is “music”, meaning that he isn’t solely geared towards metal even though his CD collection and overall metal knowledge makes me look like a newbie. Completely informal, Rev offers up tips and news on what’s tweaking his ears or upcoming events, and invites discussion on said offerings so long as you’re intelligent about it (jerk-offs with a “You suck” attitude need not apply). You might see the occasional typo or two, but the page is done strictly for fun and is therefore immune to any nitpicking by keyboard warriors.

Click on the link in the right hand column whenever you swing by this page. You never know when he’ll have something new and kick-ass on the go…