Some more fun shit with one of my homeboys… 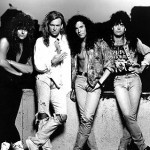 The last time I spoke with Fraze Gang frontman / Brighton Rock guitarist Greg Fraser – check out the interview here – we discussed Brighton Rock’s rise to popularity in Canada during the ’80s. They were an important part of the Toronto scene at the time, and easily one of the heaviest hair metal bands around in spite of their commercially accessible singles in regular rotation on MuchMusic and rock radio. Leaving their shows deaf was a common occurrence. I have a vivid memory of one particular show that took place at The Diamond in 1989 or 1990, which was simulcast on Q 107.1 and featured an up-and-coming local band called Winter Rose. It makes me wish digital technology had been alive and well back then, because Winter Rose featured none other than Dream Theater vocalist James LaBrie and and guitarist-turned-producer / engineer Richard Chycki in their formative years. 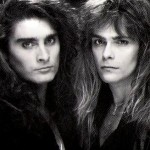 “I remember that,” says Fraser. “They were doing Whitesnake and some originals, but I can’t believe it’s the same guy. When you hear James LaBrie singing with Dream Theater you can’t picture him singing Whitesnake and Guns N’ Roses because he’s got that high vocal range. Amazing how things have changed (laughs).”

Fraser and Chycki have an additional connection in spite of the fact they never worked together in an official musical capacity, preserved for eternity in a promo poster that screams Sign Of The Times…

Fraser: “We were both endorsed by Lado Guitars and there’s a poster that was issued featuring me, Rich, John Albani from Lee Aaron’s band, Russ Dwarf from the Killer Dwarfs, and the bassist from Honeymoon Suite (Gary Lalonde). It’s not a little 8×10 either; it’s a big huge poster. I looks so burnt out because Brighton Rock played Sault Ste. Marie the night before but I wanted to make sure that I made it to that photo session which, of course, was early in the morning. We drove all night, I didn’t get any sleep at all, plus we were partying on the way back. When I look at it now I guess I don’t look too bad, but back then I looked like I was in the Rolling Stones or something (laughs).” 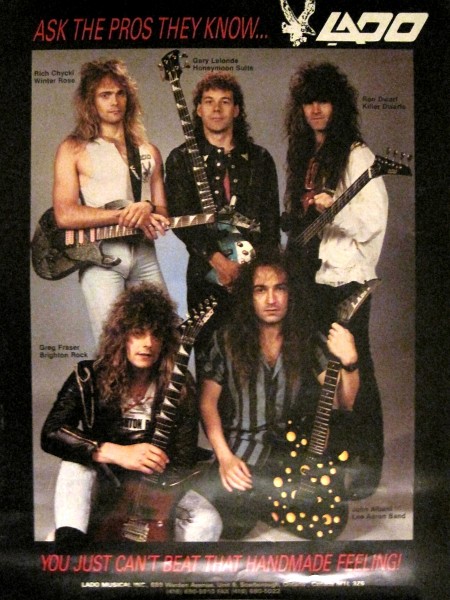 Check out some live Winter Rose clips via the following links featuring LaBrie and Chycki recorded in March 1990 at Rock N’ Roll Heaven in Toronto. It gives you an idea of their roots. ‘One Last Time’, Thrill Of The Night’, ‘I’ll Never Fall In Love Again’.

Some Brighton Rock footage, past and close-to-present: Can’t Stop The Earth From Shakin”, ‘Power Overload’.