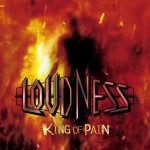 It seems that not even death is capable of slowing Loudness down. King Of Pain marks the band’s second album since the passing of original drummer Munetaka Higuchi in November 2008 – a victim of liver cancer – their first with new man Masayuki “Ampan” Suzuki behind the kit. It’s a fitting tribute to Higuchi’s characteristic push (according to frontman Minoru Niihara) to make things louder and heavier with every new record. Having regained their footing since previous outing The Everlasting – a cold album overall featuring songs pieced together using archive Higuchi recordings – Loudness unleash a surprising ‘80s flavoured rip and tear on King Of Pain. It’s not the step back into the realms of nostalgia so many fans are clamouring for but it definitely pays tribute to the past here and there, making it the band’s strongest album since the 2001 reunion record, Spiritual Canoe. Lead-off track ‘The King Of Pain, ‘Power Of Death’ and ‘Rule The World’ feature classic ‘80s Akira Takasaki riffs and tones alongside Niihara’s much improved and grittier vocals, the first song swiping a page from the band’s Shadows Of War / Lightning Strikes era, the others a tip of the hat to Loudness staples ‘Crazy Doctor’ and ‘Esper’. Takasaki hasn’t been big wall-to-wall shred for the past decade, so while he does lay down some fretboard acrobatics the band’s focus is on the almighty groove. Hardly a shock to anyone who has been paying attention over he last several years. ‘Doodlebug’, ‘Naraka’, ‘Doctor From Hell’ and ‘Death Machine’ crush with Pantera-like abandon, the band drips metalized grunge on ‘Straight Out Of Our Soul’ (which isn’t nearly as bad as it sounds), offers some soul on ‘Where Am I Going?’ (featuring additional lead vocals by Takasaki) and ‘Never Comes’, and pulls off a classic bit of Machine Head-esque dynamics on ‘Hell Fire’.

Fans will be very aware of Suzuki’s presence, as Higuchi had his own unique sound and style, but it can be said that he puts in a performance worthy of the Loudness legacy. Niihara, meanwhile, binds King Of Pain together, the glue that’s loaded with hooks and melody to make what comes off occasionally as un-Loudness-like behaviour comfortable and worth further attention. The only real downside to the album is the length, as 13 songs make it somewhat long in the tooth. Keeping it to 10 or 11 would have served the band much better, but I suppose that’s what programmable CD players are for.

From a shameless fanboy perspective, King Of Pain ranks up top with Spritual Canoe and the severely underrated self-titled album from 1992 (with ex-EZO frontman Masaki Yamada on vocals) as killer “latter day” Loudness records. Whether you’re able to get into is hinges on leaving the ‘80s on the shelf and being able to appreciate the fact that 25+ years into their career Loudness are still able to mop the floor with the vast majority of young bands that think they’re something special because MTV and VH1 said so.

4 thoughts on “LOUDNESS – King Of Pain”