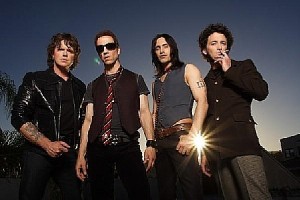 As comebacks go Extreme’s has been about as low key as it gets. Having called it quits in 1996 in the interest of working on other projects, the band got back to business in 2004 without much more than a footnote to say they were hitting the touring trail. Frontman Gary Cherone and guitarist Nuno Bettencourt babystepped it for the next few years, welcoming back original bassist Pat Badger along the way, eventually releasing the long awaited reunion album Saudades de Rock in 2008. A sign that the second honeymoon was over and Extreme was in for the long haul. Again. More touring followed, which led to the decision to film the band’s Boston hometown on August 8th, 2009 for a live DVD; the first official live retrospective of their career. Entitled Take Us Alive, the package celebrates everything Extreme became known for when they broke big in 1990 with their second record, Pornograffitti. No rust or dust to be seen or heard, for many diehard fans it feels as if the band was never gone.

“The tour was great. Actually, I think it was one of our better tours,” Bettencourt admits. “I think we appreciated everything a little bit more. When you’re in the midst of huge success like we had and you’re doing so much touring, I think you start taking it for granted a little bit. Crowds everywhere you go, all that ‘star’ kind of stuff, you kind of expect it’s always going to be there. Then, when you do what I did and leave the band to do other things, you realize how much you miss everyone; the other guys in the band, the crew, the fans. I think that when we go on stage now we really appreciate every moment and every drop of sweat.”

“Doing the Saudades album,” he adds, “it was never going to be about money or nostalgia or ‘Gee, everybody else is getting back together, we should too.’ If we didn’t have anything to offer, why do it? I don’t want to be in an Extreme tribute band.”

Bettencourt reveals there were no concrete plans for a live DVD or album to cap off the tour when they hit the road for Saudades de Rock.

“It just came up, which is the reason we don’t have more DVDs or live albums out. My feeling is that it’s very hard to capture a band. Every night is different; some nights are better than others, some crowds are better than others, the interaction between the band and the crowd is better on some nights than others, so each show is unique. I was never a big fan of live DVDs because they always seem to lack something, whether it’s the volume or the energy. It’s hard to capture a band that way.”

Even so, Take Us Alive succeeds in showcasing Extreme in their element. They are a live band first and foremost, everything else comes attached to the recording contract. 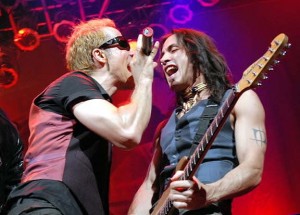 “But that’s my point” says Bettencourt, “because that’s the strength of this band, and the best way to showcase it is for you to be in the crowd. I don’t think seeing a band on TV or online is the best way to do that, because you’re missing the three dimensional perspective. Having said that, it is what it is. The DVD itself is hard for me to watch because I always have one of the best seats in the house to begin with. It’s an odd dimension for me to see it that way, but I get it. It’s better than not seeing the band at all. As much as I think the DVD came out okay, it’s good enough to get a taste of what Extreme is about.”

What they aren’t about is rehashing game-winning ideas. Extreme could have easily written another ‘More Than Words’ or ‘Hole Hearted’ to ensure maximum impact with their comeback, but Saudades de Rock had a personality all its own. With that in mind, did the new material go over with a crowd weaned on the band’s million selling hits?

“Absolutely. There are two types of fans: the ones that like the hits, and then there are the real Extreme fans who like ‘More Than Words’ and ‘Hole Hearted’ but can’t wait to hear the deeper cuts. It’s always tough playing new stuff but I think the last studio album was authentic enough that the diehard fans couldn’t wait to hear some of that new material live. I think they went over pretty well.”

As do the occasional off-key moments on ‘More Than Words’, particularly from the view of a live album purist. The band opted to leave the brief ear-curling vocal non-harmonies in the mix rather than covering their tracks with studio magic. Testament to the fact Extreme is the real deal down to the bone.

“There’s definitely something off key in there, without a doubt,” laughs Bettencourt. “There are a few mistakes in there, like when I let go of the guitar a couple times to get the crowd going. When you do a live recording you hope you don’t have to fix stuff because as you said, if it’s going to be live then let it really be live.”

For the future, Bettencourt says there is indeed another Extreme record in the works. Sooner rather than years later.

“I’m always writing new stuff, and we’re looking at doing something a little bit different than just a regular record. It’s a fun concept, it’ll be interesting and fresh. So I’m taking advantage of the run I’m doing with Rihanna to get some writing done, making sure I can keep things going. I want to make it so we don’t waste time waiting for me to get done with the Rihanna tour before we start working on the next Extreme record. I want to be done so that when I get off the tour we can just go in and record. Don’t get me wrong, though. It’s not a concept record. It’s a concept as in something different, not as in an actual storyline or anything.”

Talk of conceptual writing leads back to Pornograffitti, hands down one of the greatest concept rock records of all time. From a strictly personal point of view it’s the perfect album. Asked for his thoughts, Bettencourt appreciates the sentiment but he sees the album differently.

“For me it’s far from perfect because I hear all the stuff that I would change if I had the chance,” he admits. “I think all bands feel that way when they’ve lived with an album. But, as far as Extreme goes the record definitely is the pinnacle. It captured the time when we came to realize we’re a funk rock band, so I think Pornograffitti is very symbolic of what the band is all about.” 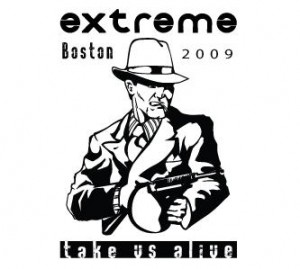 Click here for additional interview material featuring Bettencourt discussing his decision to tour with Rihanna as a member of her live band.