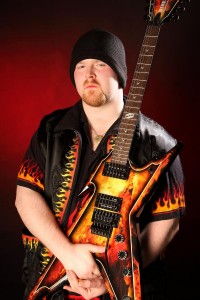 When Iron Maiden frontman Bruce Dickinson takes it upon himself to inform people that your music kicks ass, it’s a safe bet you’re on the right track.

Guitarist / vocalist Dave Reffett received just such an endorsement for his solo project Shredding The Envelope in February 2010 during a broadcast of Dickinson’s BBC 6 Friday Rock Show, who referred to the debut, The Call Of The Flames, as “a must have album for guitar fans.” A former student at Berklee College Of Music with a resumé boasting time spent working for Sanctuary Records and EMI, Reffett was and is still blown away by Dickinson’s accolades. Being able to bring in noteworthy guest performers like George Lynch, Joe Stump, Glen Drover, Michael Angelo Batio and Chris Poland was a triumph in itself, but receiving praise from the legendary frontman gave Shredding The Envelope an added boost of credibility in the eyes of metal fans that had no idea who Reffett was.

He remembers the jolt.

“Dude… wow. I emailed Bruce Dickinson’s producer and asked if I could send some stuff, and he went for it. I got an email later on saying I should check out the playback of the previous night’s show, but I had no idea Bruce had commented on the album. When I listened to the broadcast I was blown away. I was grinning for three days (laughs).”

According to Reffett, developing a project of his own was a matter of when it would happen and not if it would see the light of day. The same can be said for bringing in renowned guest guitarists; Reffett had a definite plan of action.

“I started playing when I was 13. Practiced as much as I could, went to school on a scholarship, and I eventually got to the point where it was do or die. I wanted to make my own music on a grand scale. I’ve put out some stuff in the past, but with this album I really wanted to put something cool together. I’ve always loved it when bands collaborate with other artists, and I thought that Annihilator’s Metal album (from 2007) was really cool with all the guest appearances Jeff Waters had on it. I got to thinking, ‘Man, if I could have anybody I wanted on one of my albums, who would I pick?’ I put a wish list together and just started calling around, sending out emails, and I ended up getting pretty much everyone that I wanted, which was really cool.”

Fair enough, but someone like George Lynch is well past the point in his career where he needs exposure outside of his usual haunts. It turns out that Lynch was in fact sold of Reffet as a guitarist and a songwriter. 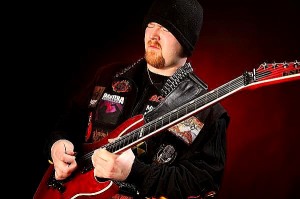 “I sent an email to his website and George’s guitar tech was passing mails between the two of us,” Reffett says of getting Lynch on board. “He finally got back to me and said that George was digging the track and wanted to do it. He was doing the recordings for the Lynch Mob record Smoke And Mirrors, so he had his rig fired up and ready to go. He did an interview recently and talked about it, and he said that he gets offers all the time but most of the stuff coming down the pipe isn’t very good. He really liked the Shredding The Envelope tracks, so that’s a great feeling.”

Reffett didn’t play musical director for his all-star team of guests, however, preferring instead to let them do their own thing. He explains:

“Well, I asked them to be on the record because I’m a fan, so I told them to basically go crazy and do whatever they wanted. I didn’t really give them any guidelines, so I was always shocked by what they gave back to me. I really tried to give it my all and I think I did a good job with my playing, so I think that might have pushed them to give it their best as well. When I got the solo back from Michael Angelo, for example, I was like ‘Holy shit!’ He really busted his ass.”

Reffett is no slouch in the shred department, with a style reminiscent of Joe Stump (HolyHell) and James Murphy (ex-Testament, ex-Death). Asked if having “name” players on The Call Of The Flames forced him to push his own game up a notch, his answer is “not at all.”

“If anything I was just so thrilled that everything was coming together. I pulled back the rhythm guitars a little bit in a couple places so the solos had more room to breathe, but it wasn’t like I heard it and wanted to do my solos over again. Those guys did a killer job and I think they compliment each other really well. I pushed myself to be the best I could; there wasn’t any pressure from the guest performances to do that.”

When word got out to the public about Reffet’s project the natural assumption was that Shredding The Envelope was an instrumental project. Guest guitarists like Lynch, Batio and Stump (pictured below) on the debut cemented that belief, so it came as a complete surprise to hear vocals all over the record.

“Yeah, I probably should have been more clear about the fact there’s singing on the album,” says Reffett. “That probably would have helped. I definitely wanted to have vocals on the album. I’ve always liked instrumental music, but for me making my own music there had to be lyrics and singing. My fiancé helped me write some of the lyrics. We’ve been together for about eight years now, and we used to email our ideas back and forth when we lived in different cities. I’d write a couple lines, she’d write a couple lines, and we built this big notebook of stuff. Once we started to get serious about Shredding The Envelope, that’s when they became actual songs.” 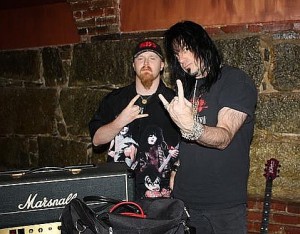 “A lot of the stuff was written when I was strung out on drugs,” he continues. “but I’m clean now and it’s funny to look back at those lyrics because it’s like, ‘Dude, how did I come up with that?’ (laughs). I think we did a good job. She wrote half of it, I wrote half, and there’s some pretty heavy thoughts on there. Some of it was hard to write, definitely, and there are other songs that I haven’t put out yet that are going to be very tough to do.”

Stepping up to the microphone was a matter of necessity for Reffett. He had a definite focus for The Call Of The Flames and didn’t trust anyone else to do the songs justice, regardless of how good their voice might be.

“That’s exactly the case. I just got to the point where I realized that I was never going to find anybody with the same vision as mine, so I had to do it myself. I studied pretty hard, worked with different people including a guy that worked with Steven Tyler, and he really kicked my ass. I think I did a good job on the record.”

“There was a review out of Greece where they said that they couldn’t pinpoint one song that they liked better than another because every song has its own character, and I love that about the album. I hate albums where every song sounds the damn same. I’ve gotten vocal comparisons to Dave Mustaine, Ozzy, Sebastian Bach and Axl Rose, which is awesome because I love all those guys, and musically you can hear my influences, but overall it stands alone, definitely.”

Shredding The Envelope is currently an unsigned act. The exposure that The Call Of The Flames has received thus far can be traced back to Reffett’s hand-on approach to promotion. With a second album in the works the question is raised as to whether he plans to seek out a record label or remain an independent artist.

“I could put out a second record on my own, definitely” Reffet insists. “I don’t want to give up any creative control, but it would be nice to have the promotional and distribution muscle that a label like Metal Blade has. But, with the internet and everything being so global now people from Australia and Japan and Europe have bought the, which proves it’s possible to make it independently.”

“I’ve got enough material for four more albums ready to go, actually Just the other day I decided there are going to be 12 songs on the next one, and if there are any guest appearances there won’t be as many as on the debut. If there ends up being a bunch, though, that’s also cool. I want to get a bitchin’ drummer, but I’ll do everything else myself, similar to this album.” 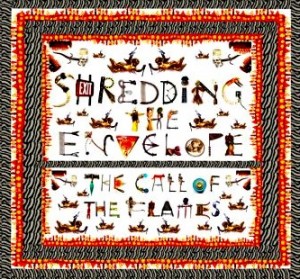 Click the following links for assorted shredology from the guest guitarists on The Call Of The Flames: