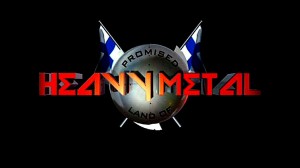 Thirty years ago Sarcofagus guitarist Kimmo Kuusniemi would have died laughing in the face of predictions that Finland would become a focal point for the international metal community. This year he released documentary offering a look into why this is indeed the case, and nobody is laughing at a job well done.

When exactly this small Northern nation began spitting out high quality metal is up for debate. Suffice to say that when Kuusniemi left his native Finland almost 20 years ago for the UK it was because his band Sarcofagus and the music he loves were viewed as nothing more than a joke by the people around him. His documentary Promised Land Of Heavy Metal – put together with partner in crime and life Tanja Katinka Karttunen – showcases Kuusniemi’s journey home to a musical climate far different from the one he left behind. It explores how and why the “new” Finland ticks as loudly as it does, and allows him to say “I told you so” to the people that dismissed metal as a joke.

Kuusniemi: “In the Sarcofagus days a lot of the press people treated me well because I was a reasonable person, so they didn’t want to put me down, but the people that had classical training in music saw the whole metal thing as absolutely ridiculous and stupid. They didn’t even consider it music, saying it was just a phase. We were up against a small country mentality: ‘If you don’t do things the way we do them, we’re all against you.’ That’s why I left Finland, because it was so negative. When we returned to make the film I found the people were much different because of the European union. The borders were open. In the old days all the bands were sort of like enemies; there was competition. That’s changed a lot, and all the bands and artists we met were really nice. There were no ‘stars’, unlike the ‘80s where a lot of these musicians were full of themselves even though nobody knew them. These Finnish bands now are so down to earth that I feel Finland is a much better place than it used to be.”

CB: One doesn’t simply wake up one day and say “I’m going to make a metal documentary” unless you’re Sam Dunn or Scott McFadyen (Metal: A Headbanger’s Journey). What was the final push that convinced you to invest the time, effort and money in this project? 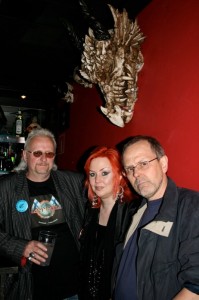 Kuusniemi: “I think it was 2005 when a producer for Finnish television contacted me because he wanted to do a half hour program about me. He had gone back to look at where metal started in Finland and ended up with me (laughs). He thought it would be cool to do a documentary about what I’ve been up to and metal in general. That’s really where the idea came from, that it would be cool to make a heavy metal documentary film because it’s been my life since the ‘70s. The other thing was that I was quite tired of the fact that people don’t understand what metal is. This film introduces metal to people who don’t know anything about it.”

“It’s the type of documentary where it has a life of its own, because I think everybody in the Finnish metal business knows who I am, which meant I had better access to artists compared to, let’s say, a Finnish television reporter. I was able to get more bands interested in the film compared to what the press could have done because people are still doubtful of the press. There have been some bad metal documentaries on Finnish TV, where they’ve tried to paint metal as a satanic thing. I think the people in the metal business in Finland know I’m not going to do that to them or the music.”

CB: How difficult was it planning things out and taking them from Point A to Point B? As I said, it’s one thing to have a grand plan to showcase metal and quite another to execute it.

Kuusniemi: “It was difficult from the very beginning because the producer from Finnish television was really excited about doing it, but the main Finnish TV programmer (YLE) asked why we couldn’t do the film ourselves. The producer explained that they couldn’t do it because the film was about my background, but without that we wouldn’t have had a film at all. The other problem was that even though it was the biggest TV station in Finland, and government funded, the budget for filmmakers is really low. We actually had to have the film finished before we could sign any agreement with the TV station, which was kind of scary. And the money that we got from Finnish TV is probably about one third of the real cost of the film, We put everything we had into this.”

CB: At the beginning of the film I had the impression you were oblivious to just how much the Finnish metal scene had developed in your absence. That’s hard to imagine considering every third metal band out there these days seems to be Finnish. With that in mind, what was it like going from the UK back to Finland with your metal radar on?

Kuusniemi: “That was a really cool thing for me because I didn’t know much about the Finnish metal scene. I’ve been living in the UK for 18 years. When I was living in Finland and making metal, there really wasn’t anyone else but me doing it. The next band that came after Sarcofagus was Tarot (featuring current Nightwish bassist / vocalist Marco Hietala), and after that came Stone (co-founded by Children Of Bodom guitarist Roope Latvala), and they’re the last band that I really remember making metal. Of course, when I’d go back to Finland I’d be listening to bands but I didn’t know who they were. Because I was living in the UK, I really had the outsider point of view of Finland going back in. The documentary really isn’t about my opinions or what I think of metal. It’s more like giving everybody else a chance to say what they think.”

CB: What surprised you most while making the film? 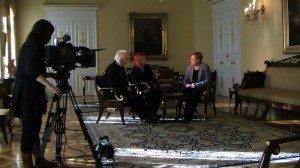 Kuusniemi: “The biggest surprise was getting the Finnish president (Tarja Halonen) into the film (laughs). Actually, we had some problems getting the Ville Valo (HIM) interview because we had to go through the record people and they were telling us something like it would take three months to get access to him, but the Sarcofagus keyboard player knows the keyboard player in Ville’s band, so I called him and Ville agreed to do it. We got it because of that straight connection. That was the last interview we did, and when we were travelling back to Helsinki from Turku we were joking that we had everyone in the film except the president (laughs). I began to think about that a little more seriously, and because I have some political friends from the past… I think that was why we were able to get the interview.”

“What really surprised me also was the quality of the younger bands. We had a competition going with the film where we would choose the best band and interview them, try to give them a push to hopefully help them get somewhere. From all the entries we got, there wasn’t one that we could throw away because they were poorly produced or the playing was bad. The quality of the music was amazing.”

CB: Lordi is a featured artist in the film, and one of those artists that gets praised and slagged in the same breath for drawing attention to Finland’s rock and metal scene. Sort of like the Finnish version of KISS minus the merchandise; cool for some and too soft for others.

Kuusniemi: “Lordi is a cool guy. We talked for a good hour and got everything we needed, but I think he was disappointed because he wanted to talk more (laughs). He’s a really nice guy and we have some common ground because I was influenced by early Alice Cooper, and Lordi was influenced by the Alice Cooper ‘80s comeback years (the Constrictor and Trash albums). The Killer album was the one that got me playing; that was the life-changing album.”

CB: One of the high points of the film for me is psychiatrist Kari Pylkkanen. Somewhere in his 60s, he looks like the typical prim and proper grandfatherly type, and he discusses at length the positive aspects of heavy metal. Amazing stuff…

Kuusniemi: “That was really surprising because we didn’t have a clue about what he was going to say. I just called him and told him what the film was about, so when he agreed to do the interview I figured he’d talk about the harmful influences of metal, and about how it’s so dark in Finland during the winter that people are so depressed, but he saw everything in such a positive way. He’s the leading psychiatrist in Finland, so it’s not like it’s just anybody on that screen yapping away.”

CB: Was it worth the effort in the end? The sad reality is that no amount of back-patting or respect from your peers is going to pay the bills or put food on the table. 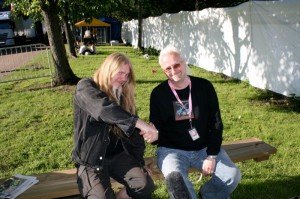 Kuusniemi: “It’s definitely worth the time and effort, but I think the money is something for the future. In Finland we got really good feedback while we were filming, we’ve gotten some really good press coverage from Finland’s biggest newspapers. I think we’re getting the coverage because a lot of these people knew Sarcophagus back in the ‘80s. One reporter, his first album ever was my band’s first album, so he was really keen to make the interview (laughs). So, these sorts of things really helped us get good coverage. It was also the first indie film released on the iPhone, so that created some interest in the press as well. We’ve had a really good response overall. It’s very hard to get mainstream newspapers and things like that to write about heavy metal. There’s still a lot of opposition to heavy metal even in Finland, because even though the country is on the heavy metal map it doesn’t mean everyone is behind it. There are still a lot of people who see it as negative.”

CB: Any parting thoughts on the experience of revisiting your roots and seeing how they’ve grown?

Kuusniemi: “I’ve met musicians from around the world and I have to say none of them have been arrogant or disturbing or anything like that. I think the weirdest experience was with Dimmu Borgir. I’ve never really followed them, so when I was talking to Sven (Atle Kopperudand aka Silenoz) he was reasonable and nice I was wondering if I was talking to the right guy (laughs). It was like, ‘Aren’t you in a black metal band?’ But I think that’s something that comes across in the film, that no matter what these metal artists look like on stage they’re nice, normal people.”

Go to this location for the official Promised Land Of Heavy Metal website. Click here for the documentary’s official photo gallery.

A video trailer for the film is available here.