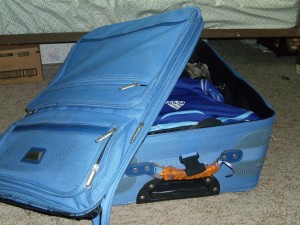 I’m an experienced traveller. I actually hate flying, but I’ve made the trek between Toronto and Germany (via Holland or Paris) dozens of times, jetted to various parts of Scandinavia, continental Europe and the UK, even risked my sanity journeying to the US, all without any major drama. Sure, there have been the occasional delays, lousy food, drink-spilling turbulence, screaming kids accompanied by their idiot “parentin’ izn’t fer us rednecks” parents, but nothing that put me into a state of wanting to cause bodily harm to the nearest airline employee.

Not until this year’s highly anticipated return home to Toronto.

Folks that know me are painfully aware of how much I love coming home. It’s my annual respite from all the things that piss me off about Germany – and there is definitely a book in there – a return to the people and places that make me feel like me. With that in mind, I’m inclined to brush off the general chaos and stupidity that’s bound to crop up on an overseas-with-a-connecting-flight trip and focus on the awesomosity that awaits me in Toronto. I realized this year, however, that when the airline loses your luggage and takes its sweet time in recovering it and getting it to you, no matter how much fun you’re having the questions of “Where?” and “When?” and “What if?” have a tendency to dampen one’s mood. Not a good thing.

For the record, it took KLM three days to get my bags to Toronto and deliver them to my home address. I daresay they wouldn’t have made it at all if it wasn’t for me harassing their call center and baggage claim people with phone calls and emails.

Of course, some people might be wondering what I made a big stink about the situation if I was at home. After all, it wasn’t like I was in parts unknown with only one shirt, shorts and a pair of flip-flops. Well, KLM lost not only my luggage, but The Girlfriend’s and The Kid’s bags as well. I know from experience that two women who need their stuff are destined to make my life miserable if things aren’t brought under control ASAfuckingP.

(Women and stuff = peace of mind. Very important if you’re a man travelling with the fairer if slightly deranged sex).

And so, a breakdown of my little adventure in tribute to the monkeys at KLM:

August 1st
– Land in Toronto, blast through customs in under three minutes, head to luggage carousel.
– After 30 minutes of waiting around, start entertaining worst case scenario that luggage hasn’t come along for the trip.
– After 45 minutes, convinced that luggage is now in Zimbabwe. Go to baggage claim desk a notice the “Oh shit” look on Geekboy’s face. Ask for a baggage claim form.
– Thankful that I was second in line when 60 people from the same flight show up behind me asking where the fuck their bags are. Hand in baggage claim form, leave chaos behind. They’ll be working late.
– Home an hour later, first Canadian beer in 11 months. Takes the edge off. Fuck KLM, I’ll deal with them tomorrow.


August 2nd
– Unable to trace my lost luggage on KLM’s convenient Trace Your Lost Luggage page. No new information available. Wonderful.
– Call KLM’s Oops We Fucked Up help line. Smart boy that I am, I wait until the flight out of Amsterdam is en route to Toronto. Ask for an update. Doodness tells me that the bags are still in Amsterdam. They’ll be on the August 3rd flight to Toronto. Really.
– Do you swear on your pet hamster’s life?
– They’ll be on the August 3rd flight to Toronto. Really.
– Uh-huh. And how much $$ is KLM going to cough up for the necessities that need to be purchased thanks to the airline’s raging ineptitude? You know, for basic things like toiletries and, I don’t know, clothes? Wearing the same shade of black for days on end will even get on my nerves at some point.


August 3rd
– Still no updates on the KLM To Trace Or Not To Trace page, call KLM help line.
– All lines are busy (big surprise), I wait ten minutes listening to some mind numbing Euro-pop ballad. Probably meant to soothe the savage beast. Fail.
– Miss Help Line 2010 tells me that her update shows no changes have been made.
– What does that mean?
– “No changes” means the bags should be on the flight to Toronto. Flight will arrive at around 4:00pm, at which point they have to be processed and sent through customs. Once that’s done they can be delivered.
– So basically, no way in hell they’re being delivered today. Happy camper. Not.

August 4th
– Call Center Girl is now aware of all details of my August 1st trip from Amsterdam, including my in flight meals, my take on that boring-as-hell Percy Jackson movie, and my innermost thoughts of the hot Dutch flight attendant in sections 51 – 68.
– According to the Trace Your Bags In 340 Easy Steps web page my luggage was processed on August 3rd. So, where is it?
– I’m informed that when KLM fuck up, they do so with vigour and full commitment to the task. Over 100 bags have to be delivered to less-than-pleased customers.
– Translation: “You won’t see ‘em until 7:00pm tonight. Better wash your socks…”
– Phonecall from KLM Driver Lackey at 3:00pm. Doodness was smart enough to not show up with only one of the three missing bags, figuring (correctly) that if he didn’t have all three, future meals would be consumed through a straw. Will come by between 7:00pm – 11:00pm.
– I’ll kill someone if I sit here waiting. Going out for a beer or ten. Okay… only one… I’m driving.
– Home at 12:30am, convinced that when I walk in the door my bags will still be MIA. Lo and behold, all three globetrotting suitcases are waiting in the front hall. Sunshine and happiness for all.
– But… (because there is always a “but”… and not the hot kind)
– … it seems my bag has been ripped wide open during the trip. Looks like it stopped at the polar bear cage at the Metro Zoo on the way home for a stress test. No measures have been taken to secure the contents inside, but amazingly nothing is missing. Nobody thought to rip off some rather spiffy metal threads, nor did my gifts for the crew get scattered across the Atlantic. I suppose this is a new version of Dutch air conditioning.


August 5th
– Back on the phone with Call Center Girl. The adventure continues…

Thank you for flying KLM, where we Kill Luggage by the Mile.

One thought on “KLM – A Toe Tag For Your Travel Bag”