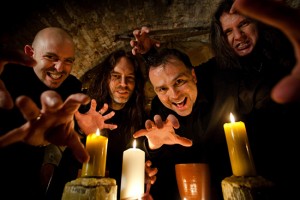 Blind Guardian have always been hit and miss with me. I’ve often found them to be too ambitious for their own good, creating epic orchestral-metal productions that beat the listener into submission with their supposed greatness. Nothing wrong with that so long as a band is still capable of writing a “typical” full-on metal song minus the smoke and mirrors, which in Blind Guardian’s case I’ve doubted for years. It seems the band has returned to their early day balls-and-brawn sound on new record, At The Edge Of Time, which is welcome change from their outings over the last decade. Following is a portion of my interview with frontman Hansi Kürsch conducted for Metallus Maximus:

“We had the impression that there would be a wide variation of songs on the album, so we just had to fill in the gaps,” says Kürsch. “But again, there was no pattern, so we could have gone onto the wrong track at some points. Luckily, we had very open discussions about how the songs were progressing and where they should go, and we followed that line all the way through the production. I’d say that in 90% of all cases we were very successful. Once we came to a decision we went for it. That wasn’t necessarily the case with albums like Night At The Opera or A Twist In The Myth.”

“This album. I think it features all the great qualities that make up Blind Guardian; the let your hair down stuff we did at the beginning on the ‘90s, the more epic stuff from the end of the ‘90s, and the more progressive stuff we did on the last two albums. There’s a little bit of everything, and I feel it’s the proper way to go. People who didn’t like A Night At The Opera or A Twist In The Myth, I think they’ll find it easier to relate to the songs connected to this period of our career.”

“People I’ve spoken to consider At The Edge Of Time to be more driven in an older direction. That is the case at certain points; there are a lot of older qualities that weren’t featured on A Twist In The Myth, but I agree that the variety we have in the direction of the music has been moved forward on At The Edge Of Time.” 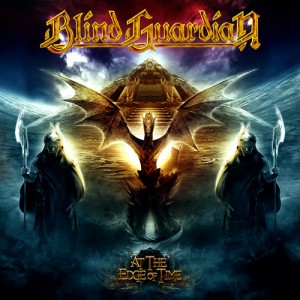