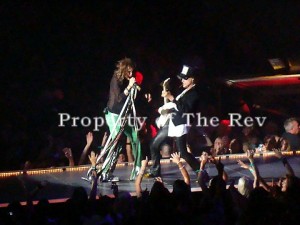 As I get older there’s a growing tendency to dismiss the younger generation as a collective of superficial, lazy, clued-out morons. I’m talking about ages 13 through 30, who in my estimation are for the most part a legion of spoiled X-Box / Playstation brats that take too many things in life for granted.

Mobile technology. Music in your grubby eardrums at the click of a button. Research and plagiarism made possible without having to go anywhere near a library. Print-’em at home concert / movie / hockey tickets. Not having to risk life and at least one hand scoffing Dad’s copies of Penthouse (again) thanks to Bill Gates products in the privacy of your own room.

Good for them. Pass Junior another Happy Meal, then try to get him out of the fucking house.

I, like everyone in my 40-and-rising age group, remember trying to find that payphone in -10 weather only to discover I didn’t have any quarters. Lining up on Boxing Day for Record Peddler specials that were not to be missed. Frying in mid-summer 35+ heat outside the frickin’ mall waiting to buy concert tickets, and the elation of scoring Red 52’s at Maple Leaf Gardens. Thanking the lord Dad didn’t notice that copy of Penthouse underneath my textbooks (no wonder I dropped Grade 12 math twice).

No matter how much I bitched and moaned at the time, that was living.

This isn’t bitterness talking. I’m reacting to the lethargy that seems to have taken hold amongst the younglings as life picks up speed. I finally understand why, when I did or said something inexcusably stupid as a kid, my parents were prone to laying down the law prefaced by “When I was your age…” Never in a million years did I think I’d ever sound like them.

That said, while I have disdain for the vast majority of next generation gluttonous fleas that are destined to one day inherit this earth, it’s nice when some of them prove they’re not as shallow as I discredit them for.

During my recent return home to Toronto, I attended the Aerosmith show at the Air Canada Centre with The Rev. As we walked to the venue there was some discussion as to what the female contingent of attendees would look like, both of us cringing at the thought of 35 – 50 year-old cougars and moms in spandex and big hair dancing in the aisles (not thinking for a second that we could possibly be regarded as two old and worn out dinosaurs). We decided there wouldn’t be much to look at beyond the stage and our beer.

Oh how wrong we were. For every female fan of an age with ourselves there were two late-teen-to-mid-20s hotties to be seen. A lot of them dressed to the hilt, many done up past casual cuteness, leaving us scratching our heads… and in a few memorable cases holding back the drool. Aerosmith hasn’t done anything knock-down-noteworthy in years beyond Steve Tyler taking that infamous header off stage, many of the ladies (and guys) filling the seats were little more than an idea in their parents’ minds when the Permanent Vacation, Pump or Eat The Rich albums were released. So what in the hell had brought them out to the show? I had my answer following Sammy Hagar’s set….

The women went batshit the moment Tyler hit the stage. It wasn’t mindless scream-’til-yer-tonsils-bleed Backstreet Boys adulation, but it was certainly at a level where boob flashing was an increasing possibility with each song into the set. Every time Tyler’s mug appeared on the video screens or he strutted down the runway extending into the crowd, squeals of orgasmic delight filled the room. Good ol’ countrified boy Jon Bon Jovi couldn’t have garnered more love from the masses.

The two attractive twentysomethings sitting to my left were part of this cheerleading squad, so into the spectacle on stage that I was compelled to ask the closer and better built of the two (my oh my) what it was about Tyler that made him so bloody hot.

Her response took me completely off guard. I was expecting a one-dimensional giggidy-giggidy answer and got slapped with clear cut logic. It made me smile. I wouldn’t call Tyler “hideous” necessarily, and I don’t think I’d mind looking like him when I hit 60, but… of course it was the music. Duh. The band played all their hits, they sounded great, how could it not be?

Given the hefty pricetag for the tickets – well over $100.00 a head for anything below nosebleed seats – there was no way the younger Aerosmith fans in the house showed up just to ogle Tyler or Joe Perry. When I considerd that Iron Maiden and KISS have enjoyed similar turn-outs on their own recent tours, it could only be the music that’s been drawing people out in droves, many of them members of the younger generation I view as being too spoiled for their own good.

Admittedly, it’s nice to have been proven wrong on that score. I’m sure many of the Aero-youth I saw that night download music illegally, a lot of them probably think Hot Topic is the be-all-and -end-all of existence, some probably haven’t ever used a payphone. Signs of the times, but the fact several hundred pre-30 fans – in the truest sense of the word – left their iPods at home to participate in an old school lights-and-sound dress-up gathering was comforting.

It was also a much-needed reminder that when I write about the music that makes my naughty bits tingle, there’s a younger-than-me crowd that is in fact paying attention. An audience that will ultimately allow me to do this journalist schtick until I finally decide to grow up and get a real job. Some of them may even grow up with me – maybe some of them have – which is a humbling thought.

So, to the aftergrowths out there, thanks for keeping me in line. Now turn the damn computer off and go outside. It’s a nice day.

– Photo by The Rev. All rights reserved.