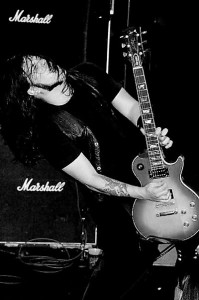 Six albums into their 11 year existence and My Ruin are still fighting for respect. On the one hand vocalist Tairrie B. and guitarist / co-conspirator / husband Mick Murphy continue to enjoy a loyal under-the-radar following, but on the flipside many people that stumble across My Ruin have no idea what to make of them. The hope is that the new album, Ghosts And Good Stories, will change that to some degree by opening a few more doors. The record is a slab of scathing original thinking that has the potential to appeal to metal fans old and new – worshippers of AC/DC down to Zakk Wylde take note – provided they get a chance to hear it. So it goes that the couple remain completely hands-on with regards to the push that is currently underway, ultimately steering clear of two-faced record label maggots in the continued journey towards a larger audience. Familiar ground at this stage of the game for the pair, because it’s this do-it-yourself attitude that has kept My Ruin alive and kicking this long.

“We do what we do on our own terms and have been isolated from the metal community in many ways,” says Murphy. “We’re an autonomous band that has up to this point, pretty much existed on our own. I realize this probably holds us back in some ways, but we’re also one of the more free-spirited bands out there and have enjoyed complete expressive freedom and a very do-it-yourself attitude throughout our entire career. Why bitch about it? We’ve made our own decisions and chosen our own path. Would I like to have a killer opening spot on a big tour? Sure, if it is the right gig for us. Do I think this is going to happen? Probably not, but that’s okay.”

Ghosts And Good Stories is easily the strongest My Ruin album to date, and not merely because it’s the shiny new toy in the band’s sandbox. Buying into that depends, of course, on personal taste and emotional attachment to their previous works. From where I stand the band has never released such a well-rounded album, as it’s completely absent of the occasional emo vibes and sometimes cold production values that have peppered their previous releases. In some ways this feels like a new incarnation of My Ruin, revamped from the ground up.

“I’m glad you like the new record. I do think it stands above our previous albums because it encapsulates the whole of what My Ruin has to offer as a band. I also really like how it turned out sonically. Josh Lynch, our co-producer, really stepped up and helped us achieve a high production value while maintaining that live energy that keeps things exciting. As far as your ‘emo’ description goes, I don’t think anything we’ve done in the past can be considered emo at all. In regards to our older material I think that we have always worked really fast, around obstacles and within the limitations of a small budget – with the exception of our Prayer record – so we have ended up with something other than a super glossy user-friendly collection of past albums. I still love every one of them though because to me, they each have a unique raw character that sets them apart from other modern rock/metal albums. I believe that Ghosts And Good Stories has that quality as well but it is a little more refined and effective this time around because we took more time making this record. We didn’t necessarily spend more time actually recording but we only worked on the weekends so there was a lot of time in between recording sessions to recharge and reflect on the whole process.” 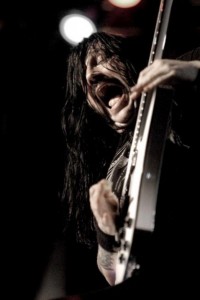 Murphy has long been regarded as an unsung guitar hero by those in-the-know. Perhaps best described as possessing an Angus Young-meets-Tony Iommi style of shred, he puts in a raw wall-to-wall performance on Ghosts And Good Stories that will appeal to both the no-nonsense rock and aggression-happy metal masses. His diversity as a player shines through on the new record more than on any other My Ruin album.

“I planned out the music on this record meticulously and I knew exactly what I wanted to get across,” Murphy explains. “I’m still a very hungry musician and songwriter because we’ve had to fight and work our asses off for everything we have achieved in this band. I watched too many bands that I grew up listening to get boring as hell as they aged and they just seemed too comfortable living in that rock’n’ roll bubble so the music suffered. I think that we’ve maintained our edge because we’ve never had that bubble to get lost in. We’re on the front lines of everything involving My Ruin, from the business to the music and pretty much always have been.”

No surprise that Ms. B has also upped her game. Her trademark screams and spoken word approach have – some would say “finally” – been given a seamless musical canvas to work with. Forget what you think In This Moment’s Maria Brink taught you about female vocal aggression…

“This is Tairrie’s best vocal work of her entire career, hands down,” agrees the proud hubby. “The screams are on point and pretty much rival anybody male or female, the spoken parts offset them perfectly while creating atmosphere and the vocal styling in between work well for each song, not to mention the great lyrics and passion within her delivery of them. Can you tell I’m stoked about it?”

Fans have been likewise stoked for months thanks to the Murphys’ regular video updates from the studio during the making of Ghosts And Good Stories. This is nothing new for the pair even though interactive technology has only become truly user friendly over the last few years. According to Murphy, keeping the fans in the loop has always been a part of My Ruin’s routine.

“We’ve documented, filmed and shared the things we do behind the scenes for a long time now. We’ve been ahead of a lot of younger bands when it comes to this stuff. We were actually selling behind-the-scenes VHS tapes to people at our shows and shipping them to people all over the world as far back as 2000. I really enjoy putting together our documentaries and have taught myself quite a bit about video editing over the years and I think the latest studio film shows this. We enjoy giving people an inside look at our process.” 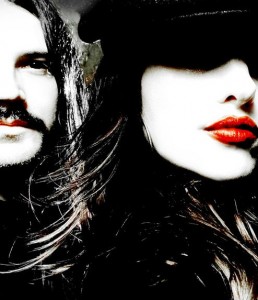 Check out the review for Ghosts And Good Stories here. For a behind-the-scenes look at the making of the album go to their YouTube channel. Audio samples and purchase information can be found here.

Watch for my exclusive interview with Tairrie B. coming to BW&BK sooner rather than later.

One thought on “MY RUIN – Murphy’s Raw”