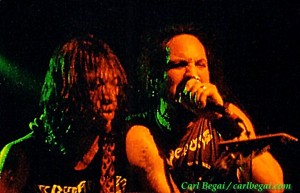 My latest “victim” was none other than Death Angel vocalist Mark Osegueda. We discussed the band’s new album, Relentless Retribution, the departure of founding members Andy Galeon (drums) and Dennis Pepa (bass), and death Angel’s plan to tour the globe until they run out of people to play for. An excerpt is available below…

Calling the new album Death Angel’s most aggressive work since their reunion is warranted, but Osegueda doesn’t offer the usual “natural evolution” lip service. According to the singer the band made a conscious decision to pushing the new music past well past the Killing Season benchmark. The end result is a thrash album echoing Death Angel’s humble beginnings with The Ultra-Violence and Frolic Through The Park.

“We’ve been hearing a lot of people saying ‘When are Death Angel going to put out a thrash album?’ Here you go (laughs). That was done on purpose. Relentless Retribution is the most aggressive record we’ve done since we reformed. When we talked to our producer Jason Suecof, we wanted the most aggressive, raw sound Death Angel has ever had and he understood that. He brought out some of the most aggressive vocals I’ve ever laid down, and I think he inspired Rob to do some of the fastest lead work he’s done in years. The Killing Season is much more our… we all love hard rock (laughs). This new one, we went back to our thrash roots, and a lot of that has to do with Will’s drum style. Andy is much more of a groove rock player whereas Will is definitely a thrash drummer, so we could do a lot of things on this album that Andy wasn’t really able or willing to do anymore.”

“I’d say it’s more like The Ultra-Violence,” Osegueda adds, making the comparison between the new and the old. “There are a few spikes on Frolic, but personally I find that album really tough to get into. At the same time a lot of fans call Frolic Through The Park their favourite album, which is great, but for me that album is ‘meh…’ (laughs). It always throws me off when people say they like it so much but I’m not going to dispute them because I appreciate the sentiment. Death Angel is a live band, and these new songs come across ripping hot when we rehearse them. When we start putting some of them in the set it’s going to make for one hell of a show if you’re a Death Angel fan.” 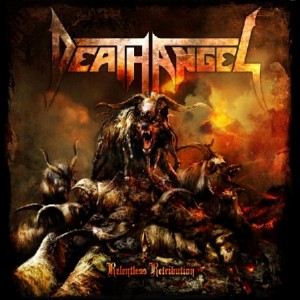