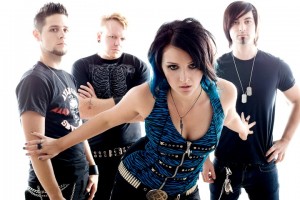 In the age of McDonald’s heat-rack stardom shoved down society’s throat by the Idiot Idol franchise, it’s nice to know that there’s still an appreciation for a good old fashioned Battle Of The Bands. No lights, no camera, no choreographed play-up-to-Paula action; just real musicians willing and able to do things the hard way for a shot at the brass ring. Toronto-based Modified is one such band, having garnered local attention earlier this year as one of the finalists in St. Catharines, Ontario radio station 97.7 HTZ FM’s annual Rock Search, which helped launch the careers of bands like The Trews, Finger Eleven, and Sven Gali. And while they didn’t win the event, placing third, Modified came away from it with valuable experience under their belt and all-important word of mouth. With a five song debut EP, Cruel Temptation, under their belts and a growing internet presence the band is moving forward, separating themselves from the faceless hopefuls playing the Toronto bar scene on any given night.

“It was pretty exciting,” vocalist Tricia Stanley says of the buzz surrounding Rock Search. “We didn’t have any high hopes for it; we just thought, ‘Let’s apply and see what happens.’ I mean, why not do it? We had nothing to lose. Then, one day I got a call from my cousin saying that we were in the Top 20 of Rock Search. We were featured on the station’s website, which was really cool and more than we expected, but I didn’t get my hopes up because other bands that I knew were also in the Top 20. Next thing I know we’re in the Top 5 (laughs). Everybody around us was really into it and really happy for us, so I guess the Rock Search was a much bigger deal than I thought it was.”

Putting a stamp on the Modified sound is no easy task; the sign of a band with something unique to offer. People are doing their best to nail them down, however, with Lacuna Coil’s name coming up more and more often. They share a few musical similarities, but it’s Tricia’s vocals that are constantly held up against those of Cristina Scabbia. Not a bad thing given Lacuna Coil’s popularity. 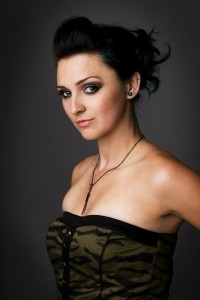 Evanescence, for example. I love Lacuna Coil and Cristina’s voice, and musically I like them a lot. People will hear Modified – or any band for that matter – and throw a band name out there as a comparison just because it’s popular at that moment. Does Modified sound like Lacuna Coil? Not really, but I can understand why people are making the comparison. Musically we’ve been compared to Sevendust, Disturbed and Garbage, all of which is pretty cool. If people are going to match us up with those bands, I think we’re in good company (laughs).”

Not quite metal (yet) and a world away from pop rock (thankfully), Modified have proven crossover potential in that they’re radio friendly – a perfect fit for the modern-edged Three Days Grace / Breaking Benjamin / Sixx:A.M. rock crowd – yet are fully capable of grabbing the attention of a greasy and / or goth metal-loving legion. Tricia chalks it up to her own and guitarist Anthony Xander’s diverse musical backgrounds.

“I was in a rock band before Modified, but it was definitely going in a pop direction and I always wanted to go heavier,” she explains. “I’ve always liked heavier music but I also identify with pop music, while Anthony is more from the industrial school, so when we got together those elements turned into the Modified sound. We pretty much do everything together. We’ll come up with our own musical ideas and play with them, we’ll jam them out as a band. It can be a lot of fun, and the whole creative process comes naturally to us so it doesn’t feel like work. I mean, I couldn’t play volleyball to save my life because it’s no fun for me (laughs). Songwriting on the other hand comes fairly easy. I really enjoy it.”

“I find that some of our newer stuff is going in a heavier direction,” she continues. “It’s not so much that we’re trying to go heavier, but this band is just getting better all the time. Anthony is a great guitarist and I don’t think he’s really had the chance to show his potential yet. And our drummer Jones, it’s not about ‘Hey, look how fast I can play the double kick…’ We don’t want or need any kind of showoff stuff like that in this band. The new music is still melodic and I think it’s still radio-friendly, we’re just pushing it a little more. I think the new songs go a bit more in a metal direction.”

New material is due to surface in early 2011, but it’s still up in the air as to how much if it will make the cut and how they’ll actually release it.

“We have a couple songs that are finished as far as we’re concerned. At least they’re ready to be produced. We’d like to go into the studio soon but we have to consider the financial side of things. We don’t want to go in too soon and end up wasting money on trying to put together half-finished material at the last minute. We also haven’t decided if we’re just going to do a full album or maybe just release a few songs on iTunes. We’re definitely going to come out with new material, though, hopefully by January or February.”

“It could be like that, sure, but we don’t play live that often. Not yet, anyway. We’ve haven’t gotten to the point where one of us can be heard saying ‘I hate this fucking song!’ I suppose we’ll get to that point eventually, but for now we’ve got these songs and we’ll throw in a cover here and there if the set calls for it. We usually do six or seven songs in a set, but we don’t like to play too long unless it’s a headlining show. Even then, I know from seeing my favourite bands playing, after a while I want to sit down (laughs). I’d rather play a shorter set and keep people interested rather than watch them heading for the door after an hour.” 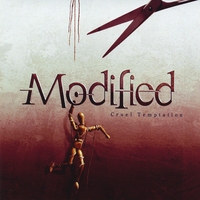