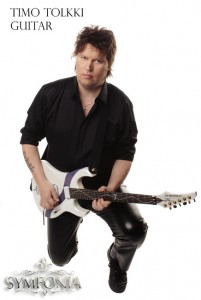 This is one of those interviews that came about purely by chance, and without the assistance of a record company or promo office. Former Stratovarius guitarist Timo Tolkki and I first crossed paths about 15 years ago, and in 1997 I attended several shows on the band’s Visions tour through Europe. I must have made a good impression, because he recently offered me the exclusive one-on-one “nobody else is getting this” opportunity to introduce his new band to the world via BW&BK. Admittedly, I was hesitant at first, based on Tolkki’s very public meltdowns due to chronic depression – band break-ups, mudslinging, label conflicts – over the past seven years, but the bottom line is I’m still a fan of his work. Add to this Tolkki’s assurance he would answer any questions surrounding his departure from Stratovarius, being called the “Milli Vanilli of heavy metal” by his former Revolution Renaissance bandmates, and his mental health. Following is an excerpt from the interview, an introduction to his new band Symfonia:

Asked if he remembers the moment when he knew he was done as Stratovarius’ guitarist, Tolkki doesn’t hesitate for a moment.

“That was at the Wacken Open Air in 2007. I was playing ‘Last Night On Earth’ and looking around, and I thought ‘This is it, I don’t want to do this anymore.’ Four months after that I sent an email explaining in detail why I had decided to leave.”

It wasn’t a pleasant parting of ways, becoming a highly publicized exchange of heated press releases and mudslinging via the internet.

“That was something I shouldn’t have done,” Tolkki confesses. “It was stupid, but when you’re angry you do all kinds of idiotic things. I don’t think the guys in the band saw it coming, actually. I don’t think they thought I’d really leave, but I had to. It wasn’t because of my health, because I was getting better, but the emotions and communication in the band felt very strange to me. Stratovarius didn’t feel alive to me anymore.”

The final volley of back-and-forth slagging occurred in May 2008, with Tolkki giving up the Stratovarius name to his former bandmates. Now that the dust has settled he’s able to take the situation as a positive development.

“I feel like they’re still my buddies and I have no grudge against them. I really hope that they’re happy and that they make the music that they love.”

Which may sound rehearsed, but discussion of Kotipelto making open statements during the press junket for the Polaris album, about how Stratovarius is better without Tolkki, makes the guitarist laugh. In a good way.

“I think it’s good that Timo talked shit because he never did before (laughs). Maybe it’s a sign he’s grown (laughs). I had small problems with him regarding that sort of thing because he was always so politically correct, so when I read something about him saying that Stratovarius has much more fun on stage now that I’m not with them, it’s like ‘Way to go, man…’ (laughs). I don’t doubt for a second that they do have more fun without me.”

“In this band I have guys like Andre and Uli, and they can write some amazing stuff, so the principle is the same as it was in Stratovarius. Anyone can bring in the song but there has to be somebody that decides whether it fits or not. Of course, when I’ve got someone like Andre Matos who is a classically trained guy, I can’t just ignore what he’s bringing to me.”

Go to this location for the complete story. Check out the official Symfonia website here. 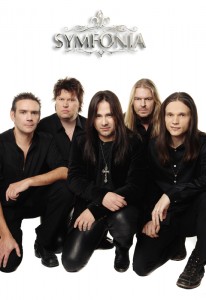