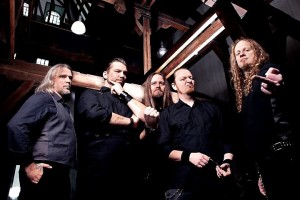 “The surprise started before the first album was out. We never had auditions, we never worked out way through dozens of people to find the right line-up. Reactions to The New Black have been pretty good and we’ve worked a lot as a live band without rehearsing because it’s just not possible. Preparation for studio time was done on the fly, basically, so the surprise started early for me. It’s not a project anymore, it’s our main band.”

More to the point, The New Black is a band that quite literally lives for the stage, ultimately keeping them together.

“We’ve had discussions about that. Are we playing too much? Are we not playing enough? Are we playing for enough money? Is it worth it? So far we’ve found a balance, but there’s always a danger of dropping the ball. If a band like Maiden almost killed themselves in ’85 on the World Slavery Tour it’s pretty easy for a band like us to fall apart. I’m the guy in the band with the heaviest workload outside the band, but my daughter still isn’t calling me Uncle Frank so things are good. It’s worked out because I’m home a lot, I’m able to manage the job and the music, but you never know what’s going to happen.” 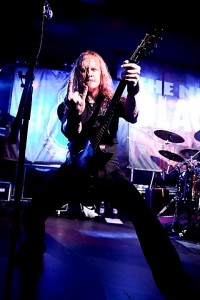 The ties that bind have tightened considerably since Leim and his cohorts embarked on their rock-‘til-you-drop mission. It stands to reason that the band’s creative process for II: Better In Black changed from their off-the-cuff approach to the debut.

“Yeah, the formula has to change,” Leim agrees, “but in our case there is no formula. I’m the guy who analyzes stuff, thinking about whether we’re straying too far from our sound or if we’re doing too much of the same thing. When we were doing the first record I said that if we happen to write a reggae song or a thrash metal song for the second one, so be it. That’s why we did ‘Happy Zombies’ on the new one, which is a shameless pop tune. Whatever happens, happens. The musical tastes in the band are diverse, but it wasn’t hard to combine it all. The only thing that’s hard is the logistics because we have three dads in the band, and we’re living all over the place.”

Personal taste ranks II: Better In Black as superior to The New Black’s debut. The band’s signature Thin Lizzy flavour is still intact, but the record has a prominent undertone hinting at the likes of Black Label Society and Iron Maiden.

“There are all these different perceptions. You say it sounds metal and other people say it’s rock, and that’s the main point of album; to get people talking. So, you’re saying it’s a metal vibe rather than the compositions being metal?”

It sounds much bigger than the debut; it’s definitely meaner, with a distinct piss-and-vinegar attitude you don’t get from straight-up good time rock.

“I’m quite happy with that assessment,” says Leim. “Calling it ‘meaner’ than the first one is cool, but I think the new one is more diverse because that’s what happens when the band members get to know each other better over time. I think this is more of a Fabs (Schwarz / guitars) record, so maybe he was in a more metal frame of mind. There’s a lot more thrash-oriented guitar playing on this album, particularly the riffs. I had to wake up my James Hetfield right hand. Because since I left my Metallica cover band I’m so damn slow (laughs).”

“People don’t really know us, but the overall reaction is that The New Black is a solid rock band that works well,” he adds. “Generally, the people who like heavy rock like The New Black. I’m under the impression that we’ve made a good name for ourselves as a live act with good songs and a good performance. That might change with this new album. Because I’ve heard some people say that The New Black’s songs are too slick for a rock band (laughs). If we had Metallica / Black album money I would have wanted it to sound like the Black album.” 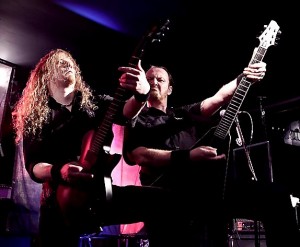 In the end, Leim gladly credits Schwarz for the direction II: Better In Black finally took when they got down to recording.

“Between September 2009 and April 2010 I was pretty much out of business with The New Black because I started a new job, so I didn’t have time to get my lyrics together. That caused a delay, but the music came together pretty easy. Fabs wrote the majority of the material over two weekends. He just shits the stuff out (laughs). I think it’s pretty easy to tell what he wrote for this album and what I wrote, because I’m the rock n’ roll guy. All the stupid riffs are mine, like ‘The King I Was’ and ‘Downgrade’.”

Returning to the band’s achievements as a live act, inquiring minds want to know how The New Black managed to secure a support slot on AC/DC’s 2010 European Tour. It may have only been two shows, but there are plenty of larger bands that will never have the same honour.

“Actually it was only one show,” Leim clarifies. “Do you want to hear the saddest story on the planet?”

He settles in and offers a play-by-play of a true rock tragedy.

“I’m not 100% sure of all the details but this is more or less how it went down. There were four AC/DC shows on the table, and there was talk about us doing them. I was wetting my pants at that point already, and absolutely nothing had been confirmed. The first show was in Hannover at the end of May and there were discussions about how The New Black might be able to play. But, I had to say no because Fludid (vocals) was in the hospital. End of story for that show. I had to say ‘Whatever you decide, we’re out’ because the guy couldn’t walk.”

“They got an Austrian band called Boon to open up for them in Vienna, and they did a good job there so they ended up getting the Hannover gig as well. That gave them the Berlin gig, too, but there was still talk about having The New Black on the bill. We ended up being confirmed for Stuttgart and Dresden, but then word came down that there were too many support bands and the production couldn’t handle it time-wise. That’s just the way it goes; a square peg won’t fit a round hole and we were chopped off the bill. So, we ended up with only one AC/DC gig. I’m not complaining, though, because it was one more than I ever thought I’d get. I’m not saying we would have gotten the others, but it was sad that we had to say no when the subject first came up. I’m proud that we were able to do even that one show.” 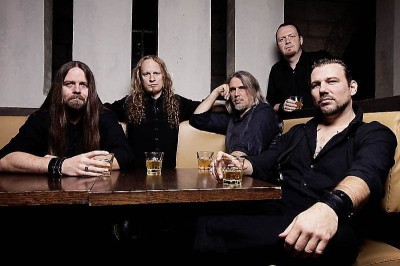 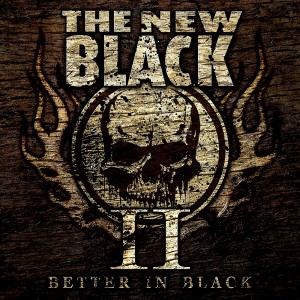 Go to this location for information on The New Black. Seriously, you should. Skid Row is never coming back and Def Leppard haven’t released a good album since Pyromania. The New Black will save your no-nonsense rock dood(ette) soul.