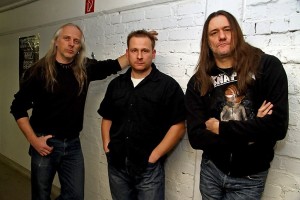 In spite of his take-no-prisoners image fuelled by Sodom’s brand of punk-based thrash – an image he’s had for over 20 years – frontman Tom Angelripper (right) is one of the nicest guys you’ll ever meet in metal. On top of that, his dedication to the fans that have made him a household name among European thrash fans is second to none. It’s always a pleasure hooking up with the man, following is an excerpt from our latest go-round…

“We’re not a political band. We write songs about the things we hate.”

Nothing new for vocalist Tom Angelripper and his veteran thrash trio, Sodom, but the hate has never sounded this good. In his ongoing pursuit for the ultimate ten ton delivery, he conscripted producer / guitarist Waldemar Sorychta to record new album In War And Pieces, with spectacular results. And while this sounds like the cliché lip service that boosts every new album to cross a journo / fanboy’s desk, the simple fact is that Sodom’s trademark and traditional old school thrash has taken on an added dimension. Shades of Slayer left and right, classic Kill ‘Em All vibes, In War And Pieces is a record with a world class stomp that hasn’t been heard from Sodom until now. Not that they haven’t written songs to match in the past; Sorychta just happened to rip things wide open…

Angelripper, naturally, isn’t about the comparisons or the accolades. “Does it sound good?” is all that matters.

“It sounds a little bit old school, some people have said it sounds like the Agent Orange album (from 1989). I don’t really hear that, but okay, people hear different things. What’s the difference between old school and a modern sound, anyway? I think Agent Orange sounds as if it has a modern edge. It’s got a big production, the songs are very dynamic. The important thing for me on the new album was the sound of the drums. I listen to some albums and the drums sound like a computer or triggers, and I wanted a big and natural drum sound. For the guitars I wanted to have them closer to the ear, if you know what I mean, and I wanted more aggressive vocals. I always want to make Sodom sound like a band is supposed to sound it was very important to me to have Waldemar working with us for this album.” 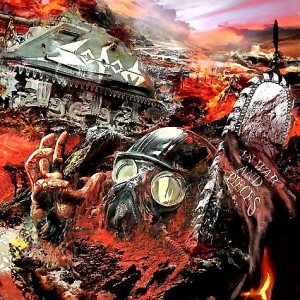