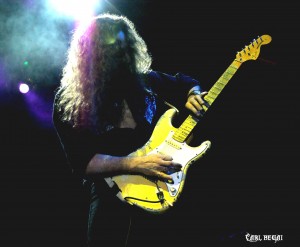 Primal Fear guitarist Alex Beyrodt isn’t shy about his classic rock roots. One only needs to check out his new Voodoo Circle album, Broken Heart Syndrome, for a time machine return to the era when Deep Purple, Whitesnake and Rainbow were kings. As Beyrodt was gearing up for the release of the album, however, he had the unique opportunity back in January 2011 to play on the Rock Meets Classic tour through Europe and share the stage with Deep Purple frontman Ian Gillan. During our interview for Broken Heart Syndrome (coming soon via BW&BK) he reflected on what was an unforgettable road trip.

“Man… what can I say? On the day of the first show we had a quick soundcheck that afternoon, and that was the first time I saw Ian Gillan. I think we did something like one verse, a bridge, and a chorus for one Deep Purple song. After that he disappeared, and the next time I saw him was at the show. He came on stage and we started with ‘Highway Star’. There’s this great guitar solo in the song, so of course I’d practiced it like crazy (laughs). I played it and, believe it or not, he comes right up to me on stage, looks me in the eye and gives me a thumbs-up. And he’s smiling (laughs). After the song, in front of 3,500 people, he looks at me and says ‘Well done, Alex.’ I was like’….Wow!’ (laughs). That doesn’t happen to very many guitar players.”

“And it got better every day,” Beyrodt says of the whole production. “We were really well rehearsed and it was a great show. The audiences were great. It was a dream come true for me to do a show like Rock Meets Classic.” 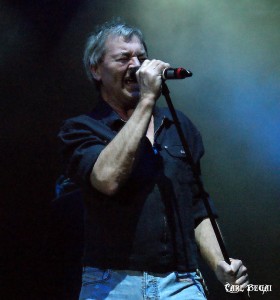 “In Basel, Switzerland, me and the background singers – Ralf (Scheepers / Primal Fear), Amanda (Somerville / Avantasia, HDK) and the girls – went to this gorgeous hotel where Ian was staying for a couple drinks at the bar. It was a five star hotel where even the bartender looked like a millionaire; English style, open fireplace, the whole thing. Ian came down to the bar later in the evening, he saw us and invited us over to his table. We had a few drinks and he told us stories from the past. I was in a daze, thinking, ‘I’m sitting here in this gorgeous hotel with Ian Gillan and he’s telling me about when he joined Deep Purple.’ How many people actually have the chance to do that? It was unbelievable. And Ian is a real gentleman on top of it all. It was an amazing experience.”

Footage of Rock Meets Classic performing ‘Highway Star’ – and Beyrodt having enough fun for 10 people 🙂 – can be found here.