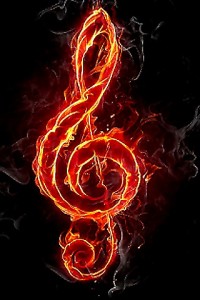 I have no problem with people criticizing me, but it seems to me that if someone would stop whining and moaning so much about his chosen profession and how the world is so goddamn unfair there might be room to ask pertinent questions.

There’s no argument that the music industry is in trouble. Doesn’t matter if it’s metal or not, thanks to illegal downloading the artists and labels are losing money, everyone in a position to sign or sell bands is scrambling and cutting corners, anything to slow or hopefully stop a domino effect that is doing major damage to everyone involved. I’m not on the receiving end of a lot of that, so I don’t know the extent of just how deep the damage goes (my best bud Paco could probably right a book on it…), but I can see how a musician who has been in the biz for over 20 years would become embittered and disillusioned. Especially when he’s seen bands that used to be on the same level as himself enjoying some ridiculously amazing success in recent years.

There are plenty of bands and artists that can’t hack the present day state of the music industry, and with good reason. I’ve seen several bow out publicly and admit they couldn’t deal with the new grind, or make a quiet exit and go on with their lives, never to be heard from on a musical level ever again.

On the other side, there are plenty of metal and rock bands that are putting skull to grindstone and suffering for their art. I’ve spoken to more of these acts than I can count, and I’m always amazed and in awe of the fact that they are not only willing but actually able to carve a life out of their art when the industry is in a state of decline. They love what they do and it shows not only in their music but in the way they present themselves. Are they getting screwed? A lot of ’em are. So what’s the payoff? I have no idea, but they have my respect.

These bands / artists are also the reason I love my job.

Bottom line: as a professional musician, to do nothing but whine every time you release an album…in this case five or six years running…maybe it’s time to move on. Scratch that. It is DEFINITELY time to move on. Make music because you love it, not because feeling sorry for yourself is second nature, or because you think the industry owes you one.

Sadly, I’m not professional enough to separate my personal feelings from business. There will not be a story in BW&BK with the subject of this blog because the “interview” is a sad and bitter rant that no one needs. There won’t be an album review because the record is mediocre at best and I’m no longer able to focus on the positive aspects of the music.

And there won’t be another interview done by me with the individual in question until he pulls his head out of his ass and gets his shit together.