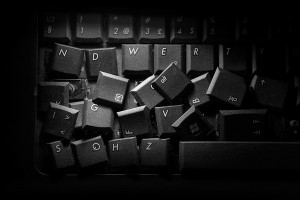 As one of the members of the BW&BK family that posts news on the official website daily, I have the opportunity to promote artists that I feel are worthy of the coverage. In other words, folks that I like. The boss trusts my judgement, I’m not into bullshit tabloid reporting, our daily traffic is ridiculous, which makes it a great forum to offer some free exposure. There are things going on in the metal world to report on that don’t involve KISS blowing up a stage somewhere on tour or (insert black metal band here) being accused of offending (insert prudish social organization here), and today was no different. A buddy of mine with a long professional history of shredding up a storm let slip that he has a new project in the works, and I figured the fans would be interested in hearing about it. When I sent him the link to the news, however, he was grateful but not exactly enthused.

He explained that as much as he appreciated the exposure, the amount of trash-talking that has come his way over the last year or two as a result of these extra credit news bits had gotten to him, making the music world an increasingly lousy place to be. Basically, online talk and reports of new song ideas, experiences or projects has earned him the disdain of a small group of people that are quite happy to slag him in online forums for no good reason. I was appalled to hear this, and deleted the post without a second thought.

It sickens me to think that efforts meant as a helping hand did more harm than good in the end. Symptomatic of the psychotic digital information age we live in, I suppose, where every computer comes with a built in God complex for the user with no concept of respect.

Granted, there’s no screaming allowed when you decide to put yourself out there as an artist. Musician, actor, writer, photographer, painter, it doesn’t matter; if you willingly present your art to other people there has to be the understanding that not everyone is going to like it. More to the point, there has to be the understanding that somebody somewhere will dislike it and may be rather vocal about that fact. So long as that criticism is constructive, the artist doesn’t have the right to bitch. He or she might not agree with the viewpoint presented, but there’s no choice but to grin and bear it. Over and out.

Character assassination is another story entirely.

I started this journalist schtick 18 years ago, and during those first couple years I wrote some negative-bent album reviews that, in retrospect, were deplorable. Some were mean-spirited, others were entertaining – carving Peter Criss’ 1994 solo album, Cat #1, with two verses written to the tune of ‘Beth’ covered both – and they served nobody but me and my inflated ego. I regret writing them, and hopefully I’ve improved in my writing and judgement over time. I was reminded of those childish attempts at I’m-so-cool today and shudder to think that, thanks to the internet, similar talent-free feedback is no longer restricted to store bought magazines.

The rise of the internet has created a generation of keyboard warriors juiced up on a sense of judge-jury-executioner superiority. And when I say “generation” I’m not talking about one confined to the idiotic Warcraft-fed kiddies that still need mommy and daddy to wipe their asses. Nope; I’m talking about people from all walks of life that have a hate-on for anyone that seems to have it better than they do because they think the world owes them something. They unload insults like spitballs, trashing a person’s artistic abilities, taking aim at parentage or sexual persuasion or looks, or just being all-out “fuck-you-you-fucking-fuck” profane. These are the same people that would implode with stark naked shit-their-pants fear if they were faced with the opportunity to tell the artists what they think face-to-face.

I guarantee you that not one would have the balls.

Artists are easy targets, of course, thanks to their public personas. People have a tendency to forget that behind the so-called celebrity is a human being. Every so often, like today, I’m reminded of that fact.

Over the last year or so I’ve been posting updates on an L.A.-based band, all taken from their assorted Facebook pages. The band in question is the brainchild of a lovely lady I’ve known for years. When we first crossed paths in the late ’90s I was nervous – hell, I was scared – because she had a reputation for being outspoken and and in-your-face attitudinal if she didn’t like you. I should have followed the rule of believing half of what you see and none of what you hear, because she was a sweetheart. Our contact was sporadic in the years that followed – all business – but communication was opened up thanks to the rise of social media. So it went that I’d push her band when I found something newsworthy on their sites. Given that they’re a small yet professional do-it-themselves act I thought I was doing them a favour. But, she asked me quite nicely if I’d only post information she consented to, in the interest of “keeping things in the family.” She felt the posts written to the friends and fans of her band were sacred and heartfelt, a way to connect on a personal level to those who willingly invested time, interest and energy in following their activities. I complied, of course, because none of what I was doing was about me.

We’re still in touch and nothing has been said about the matter since, but the message was clear. Simply put, here’s a band that wants to provide the people that give a damn with information rather than opening themselves up to unnecessary abuse from jerk-offs that have nothing better to do than pass judgement on something they don’t really care about.

I respect her point of view. It’s a pity there are so many small-minded folks out there that need to be told they’re out of line.

If you happen to be someone that fits the keyboard warrior description, and you’ve come this far only because you wanted to see where the old bastard was going with this rant, I offer you the following two step checklist as a means of addressing the error of your ways:

1) Prior to unleashing your righteous “I think I’m tough” ire* upon your intended victim, highlight all points below that pertain to the artist(s) in question that you’re about to slag.

“I hate that musician because he / she…”

— plays real instruments / can sing without the assistance of the Ke$ha Auto Tune 2011 Special.
— has recorded albums that are actually purchased by adoring fans.
— has played live in front of people that didn’t give a damn when the show started, but lived to the tell the tale.
— got called back to play the same venue, with twice as many people showing up. And free beer in the backstage fridge.
— are recognized by people outside his / her / their family and circle of friends.
— has been offered / had sex in unexpected situations / places with hot people, without having to settle on a price first.
— has done charity work that actually resulted in a profit for the organization and not the stacked tart behind the bar.
— has been featured in respected magazines, on noteworthy websites and newscasts.
— can tell you that tour bus law negates all laws of the universe.
— can prove that being backstage is not as exciting as everyone thinks.
— has fallen off stage or taken a guitar / bass / mic stand / drumstick to the head.

2) Then ask yourself: What have I done with my spineless, pathetic little life?

The silence is deafening.

* Ire (definition for the clueless): intense and usually openly displayed anger… like on YouTube, where we know you watch Katy Perry and Rebecca Black videos even though you claim to be 110% proof metal-or-die all the time.

2 thoughts on “Keyboard Warriors – The March Of The Spineless”