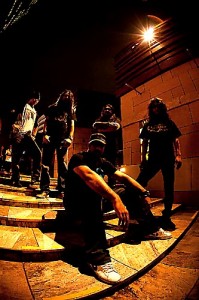 “In the early days, we used to play pretty authentic heavy metal influenced by Judas Priest, as you can see from the name of the band. But the guitar player at that time was also into hardcore punk, so we were naturally going for more extreme direction. What we call thrash metal came into the scene shortly after that, and I think the basic musical direction of the band was established around that time. As time went by, we started listening to broader styles of music, wanted to pursue dark and heavy sound like Pantera, Korn or Tool, and made albums like Reload (’97) and Distorted Vision (’99). I don’t think they were in the realm of thrash metal. The experimental trials ended up not as cool as we had wanted, and we realized we weren’t skillful enough to do those kind of cheap tricks, so we returned to where we knew we belonged (laughs). Our new album is the heaviest and the fastest album in the entire history of United.”

Tear Of Illusions falls in line with what the United does best, namely old school thrash. Die hard fans have nothing to complain about, and folks that have only just discovered United will be prone to drawing lines to Death Angel, Kreator and Testament as a matter of comparison. 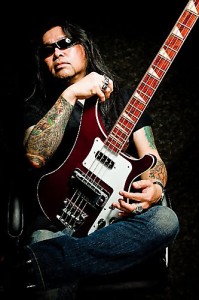 “Thank you for the compliment. We’ve supported Testament in Japan and they’re one of our favorite bands, so it’s an honour for us to be compared with them like that (laughs). We’ve been getting really good reactions to Tear Of Illusions. So many people have told us that it’s the best album in the band’s history, which makes us feel really great. But you know, if you’re in a band as long as we’ve been, there are some people who say things like ‘United was in the best shape when so-and-so was the singer,’ or ‘The first album is the only true United album…’ Unfortunately, unless we have a time machine or something, we can’t change those people’s minds (laughs).”

As for what makes Tear Of Illusions tick, it has less to do with their North American and European metal cousins than people think.

“To be honest, I don’t listen to other bands’ new albums very much. Unlike when I was younger, it happens less frequently that I get inspired directly by music; I’m probably more inspired by films or the news these days.”

One potential sticking point for United going into Tear Of Illusions was the introduction of yet another new singer, making Faisal ‘Ken-Shin’ Al-Salem the fifth person behind the United microphone. As an added twist, Ken-Shin is the lone non-Japanese member of the band, hailing from Kuwait. A potentially sticky situation reminiscent of when American-born Michael Vescera replaced original Loudness vocalist Minoru Niihara in 1988. With Japan being Loudness’ homeland and biggest market, the majority of fans weren’t happy.

“The Japanese fans do welcome Ken-Shin,” insists Yokoyama. “He spent 10 years in Japan studying at university, so he doesn’t have any problem with the language, and more than anything he really loves Japan. He jokes that he was actually born in Kashiwa-city (in Chiba prefecture) but his parents’ home is in Kuwait.”

Ken-Shin has definitely brought the aggressive edge of United’s early days back to the front; a sure sign that he’s earning his keep even to those questioning his role in the band

“More than anything it’s a major factor that he can speak English,” Yokoyama says of Ken-Shin’s contribution to the band. “None of the singers in the past could have a conversation in English even though they sang in English. So, there will be no need to worry when we have a chance to tour the world (laughs). Also, his height gives a big impact in terms of the appearance (laughs). Musically, I think it will gradually come along. Everything from professional recording to playing in over 1,000-capacity venues is new to him, so he’s in the process of absorbing them one by one.” 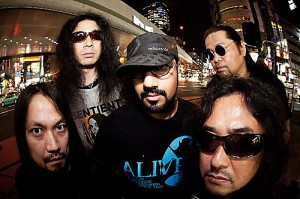 The music coming out of the Japanese metal scene has become increasingly aggressive over the years compared to the ’80s, when Loudness and X were kings. This new era features acts like Dir En Grey, Blood Stain Child and Head Phones President, all of whom are much younger than United and redefining metal in their own way. Given their rejuvenated sound, United has the potential to tap into a younger generation of fans in much the same way many classic ’80s thrash bands from North America and Europe have.

“Because we often play with younger bands, of course there are cases that their fans will start listening to us from that point on. We just go there and play with various bands even though their music may not be in the metal genre. We do this in the hope that it gives a chance for their fans to be interested in metal music. I’m friends with Dir En Grey, and actually saw them live recently. I agree they sound very heavy these days, but I would say that many of the people in the audience in Japan are fans of Dir En Grey, not of heavy music itself. It may give you a wrong impression, but I can’t imagine their enthusiastic fans would be interested in other bands’ music. Of course, this may not be true for every one of them. It’s a pity because the band puts on a great show. That’s said, I hope we can share the stage with them some day.”

“In my opinion, Blood Stain Child has changed their image too drastically recently, and I can’t really understand what’s going on with them.”

In discussing the old and new guard of Japanese metal, Yokoyama comments on United’s unique link to X Japan, arguably the biggest metal band in Japan’s history, who are currently enjoying a major worldwide comeback. It turns out United guitarist Yoshida was a member of X Japan in their infant years, back in the early ‘80s when they were known simply as X. Yokoyama offers an eyebrow-raising look back: 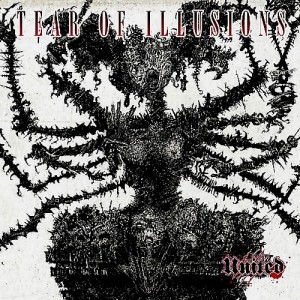 For more on United and Tear of Illusiond go to this location.