A blast from the past, posted a few years ago on Facebook and resurrected here in the now because it’s one of those fond memories that never gets old for me. Any Canadians reading this will appreciate the irony that wraps this tale up…

Some names have been changed to protect the presumed innocent… 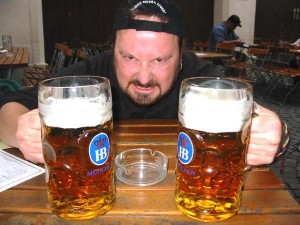 A few years back, my best bud Paco decided he was going to visit me in Germany. He was overdue for a vacation and worked out a trip where he’d spend time in Holland with friends, then come visit me in Nuremberg, and cap things off with a jaunt through the pubs of Ireland (I’m happy to report he survived the last bit). I was all for it and was looking forward to four days of playing tour guide, talking metal, drinking copious amounts of beer, and (as it turned out) adopting the word “SMORE!” to express our appreciation of the opposite sex. We used it a lot.

Things began in Munich where, following the 45 minute subway trip from the airport into the city, I dragged Paco to the infamous Hofbräuhaus, a tourist trap armed to the rafters with beer. In other words, our version of Disneyland. We stashed his bags in a locker at the train beforehand and took our time doing The Walk downtown. We had a good two and a half hours to kill before our train to Nuremberg was due to leave, so no rush, everything was cool. Good weather, awesome scenery of the female variety – there’s something to be said for German engineering after all – and when we finally got to the ‘Haus, great malt beverages. We killed a liter each, shot the shit, I think I may have ordered a second beer (dumb idea). We took our time leaving, even getting one of the girls working there to show us her rather large pretzels (no, really) figuring 20 minutes was plenty of time to get back to the station.

Paco and I quickly realized I’d made a “slight” error in judgment with regards to time versus distance, a fact we were reminded of by the clocks that were seemingly hanging on every street corner and on the side of every building. We were forced to run for our train; not a fun exercise when you’ve really gotta pee and you’re buzzing.

We reached the station with only two minutes to spare. Without exchanging more than two words – mainly because neither one of us could catch our breath – we executed a divide-and-conquer maneuver that gave military precision a new meaning. While I sprinted/stumbled for our gate to make sure the train didn’t leave without us – no idea how I would have stopped ’em, then or now – Paco banked left, grabbed his bags out of the locker and brought up the rear. We quite literally jumped aboard with the door slamming shut behind us.

You’ve never seen two more pitiful souls. We collapsed into our seats (which just happened to be in the same car we leaped onto), sweated through and on the verge of passing out from exertion. It was agreed, however, that beer would cure our ills and give us the much needed strength for the 90 minute train ride. Thus, once I was able to stand upright and not fall over I elected to get the first round from the on-board restaurant. I wasn’t a stranger to the German bullet trains (called the Inter City Express, or ICE for short), but the walk to the bar went on forever. Sure, they’re long trains, but not that long. What made the trek even weirder was the fact that most of the cars were almost empty, making it feel like I was in one of those weird ass movies where some poor sap is caught in an endless loop as he tries to get from one room to the next. It was a good five minutes there, five minutes back… and genius that I am, I didn’t think to buy two or three beers each in order to save the trip back for a second round.

And yes, we did go back for more. Sadly, we weren’t being paid by the kilometer.

At some point during the trip to Nuremberg, I informed The Girlfriend that we’d be hitting the Brown Sugar before heading home. She didn’t give me any grief, understanding that after having not seen each other in a year, Paco and I needed to do the chest-thumping-male-bonding-titties-and-beer-and-noise thing.

The Sugar is a shit-hole little rock bar, but I told Paco it was worth checking out because they play the stuff we simply don’t get in the clubs or on the radio at home (unless Shannon is at the Bovine): Saxon, Destruction, classic Helloween, Blind Guardian, Fight, Death Angel, Testament… basically, everything an old school metalhead could want. Best of all, it was a two minute walk from the Nuremberg train station. And they served beer.

So there I am with Bro Paco, hanging in the city I’ve condemned myself to live, figuring it’ll be a treat for him to hear some real metal at a healthy volume in a dirtbag rock bar, just the way we like it. We make the two minute jog to the Sugar, enter stage right…

For the record, I have nothing against Honeymoon Suite. In fact, they played a large part on the soundtrack of my teen years, and to this day they still hold the record in my books as one of the loudest shows I’ve ever attended (Ontario Place Forum, August 1984…my ears were ringing for four days afterwards). But, COME ON! Paco travels 6,000 kilometers to see me (his fault), almost keels over from exhaustion (my fault), then nearly dies of thirst on the train (my fault), and he gets a rock tune from Niagara Falls, Ontario (Q 107’s fault). What’s the one about God having a sick sense of humour?

Even better, I think the DJ played ‘Subdivisions’ by Rush immediately afterwards.

Only in Canada, eh? Not bloody likely…