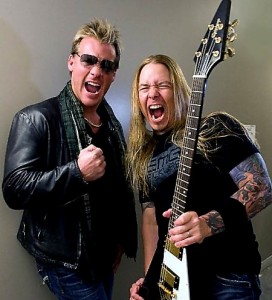 “That was the coup of ages, man,” laughs Ward. “I asked Chris if he was okay with having a guest guitar player or two on the album. We did it on the previous one (All That Remains from 2005), and it was cool having Marty Friedman (ex-Megadeth) and Zakk Wylde (Black Label Society) come in and lay down their stuff. For me as a fan of those guys it was just cool. Chris asked me who I had in mind for Chasing The Grail, and I gave him three or four names. He balked on all of them except for Waters (laughs), and he suggested that instead of having a bunch of guest guitarists, that we have just one killer guitar player come in and tear it up. I’m not lacking confidence in my lead playing, but I know who I am as a lead player, and I ain’t Jeff Waters (laughs).”

“I never even saw Jeff during the sessions,” Ward reveals. “I just set him up with a file of the songs and talked him through where the solo breaks were and what I was thinking, but I didn’t have any specific ideas. I just told him to go crazy, and when he sent the files back…. (laughs)… it was the most amazing, crazy, kung-fu guitar shred I’d ever heard (laughs). It reminded me of standing in a room, screaming at the top of your lungs and tearing shit up. That’s the way Jeff plays.”

“The only reason we got him was because he and Chris are friends. I’d met Jeff before and we get along great, but that relationship is through Chris. They’re both Canadian, and Chris is a huge Annihilator fan, so I’m just the lucky recipient of that relationship.” 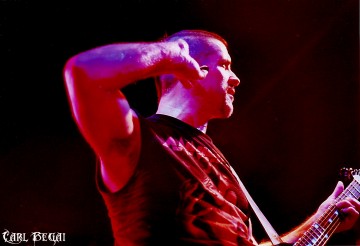