Dee’s passing has hit much closer to home for people on the Toronto that worked, played, and occasionally butted heads with Sven Gali. Famous Underground vocalist Nick Walsh – who made a name for himself fronting Slik Toxik at the same time Sven Gali was raising hell – paid tribute to Dee when he received word of his death:

“When we were young, drunk and stupid, Slik Toxik had somewhat of a sibling rivalry with the boys of Sven Gali. It wasn’t until I was in LA mixing when I happened to run into Dee and T.T. (Maher/bass) on the Sunset Strip that our new friendship was forged. Brothers from the same scene unite. After that experience we toured together, drank together, and rooted for each other all the way up till these current days. I just thought I’d share with all of you how rivalry can turn into camaraderie. We love ya, Brother.”

Former Slash Puppet singer Anthony “Mif” Mifsud contacted me the following day with his own tribute:

“On behalf of the rest of the members of Slash Puppet, I would like to extend our sincerest condolences to Dee’s family, friends, fans and fellow bandmates. Today marks a truly sad and sobering day as a fellow member of the extended family known as the Toronto heavy metal scene has succumb to an illness that was so bravely challenged and so valiantly fought. His enduring spirit was exemplified as much in this, the battle for his life, as it was throughout all of his years of contribution to the music scene here in Canada and indeed around the world. Dee must now continue to shine amongst the stars above us in the same way that he shined as a bright star amongst us, and while he will be sorely missed, he will never be forgotten by those he touched with his music, friendship and kindness.” 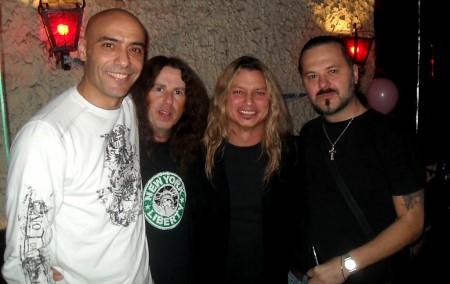 In closing, following is a verse written by Cernile and posted on his official Facebook page:

“It has occurred to me that the days of life are a forgetful mistress.

In my youth I would dance with her night after night with little thought of her being missed by the likes of me.

Time would be the one missing my robust ways and seemingly endless days.

Time would wonder where I am, where I’ve been and what other forces I’ve been with.

But today I found an envelope addressed, stamped and dated.

My, the hours fly by, and as wisdom would have it, I discover that my mistress, Time, has been dancing all along. I just didn’t see her!

So on behalf of my forgetful mistress, Time, and my forgetful self, please accept this delayed message to you, and consider yourself remembered.”