When word came down in March 2011 that Canadian bashers Into Eternity’s vocalist Stu Block had replaced Matt Barlow as the singer for Iced Earth, it caused major confusion amongst fans in both camps. Iced Earth followers that were aware of Block’s shriek-and-growl style were convinced guitarist / founder Jon Schaffer had lost his mind, while Into Eternity fans were left wondering if the band had a future without Block’s unique vocal talents. Both he and guitarist Tim Roth have maintained that Block is still with Into Eternity – a claim that rang true with the recent release of the single ‘Fukushima’ – but news that The Order Of Chaos singer Amanda Kiernan had been brought in as Block’s live replacement so the band can tour served up another barrage of questions. With that in mind, Roth was happy to hook up and set the record straight. 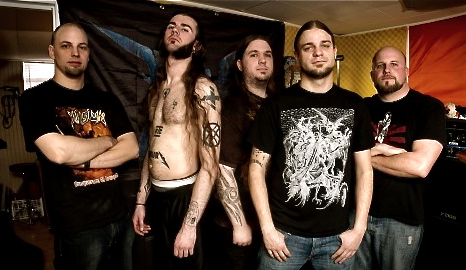 “We were rehearsing on a Friday, and after a whole weekend of rehearsals he hit me with the news that he’d joined Iced Earth,” Roth recalls when asked how Block broke the news of getting the gig. “And then he hit me with a CD of him singing some new Iced Earth stuff. So not only did he tell me, he showed me some of the material they’d already recorded. I was just floored. Stu and I are best friends, and we weren’t doing anything at the time, so it makes sense that someone would come in and invite Stu to join their band. Jon Schaffer knows talent, I know talent, and Stu has always been that shining diamond in the rough. When I’d seen him in his previous band he really impressed me. I knew I had to have a guy with his kind of vocals in Into Eternity.”

With an album entitled Dystopia and two big tours under his belt thus far – and more stagework to come over the next year – Block has won over the vast majority of Iced Earth fans. The band’s popularity has flagged in recent years thanks to what Schaffer himself refers to as “unfocused” songwriting, but Block’s presence has rejuvenated the trademark Iced Earth spirit that made albums like Night Of The Stormrider, The Dark Saga and Something Wicked This Way Comes so popular amongst the fans.

“I’ve always known that Stu could save any band from going under,” says Roth. “There’s no limit on his vocal range. You know how some people, when you ask them to do something they’ll give you 10 reasons why they can’t? With Stu, if you ask him to do something, he’ll say yes. He’s motivated, he’s got the image, and he’s got an insane vocal range. No one can touch him. I can hit the highest note on my guitar and he can hit it with his voice. Any note we’ve needed Stu to do, he’s done it.”

“He was something of an underdog, I think,” Roth adds, referring to when Block replaced Chris Krall in 2005. “People would be mocking him online, and when we played live there were people in the crowd trying to do these fake falsettos to make a joke out of his voice, but Stu really can pull it off. He powers those notes with his diaphragm, but then he’ll add a rasp or a vibrato. He’s got total control over his voice, and it’s amazing.” 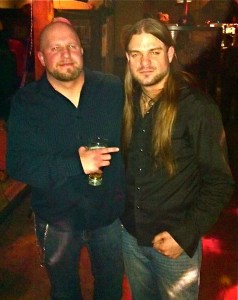 Block is still a member of Into Eternity, but Roth is a realist. Iced Earth isn’t a disposable weekend warrior garage band, and it’s very possible that Block will be forced to ditch Into Eternity if he wants to keep what’s now his day job.

“That’s how it could end up,” Roth agrees, “but we don’t want to close the door because you never know what’s going to happen. Maybe in two or three years Jon Schaffer will decide he wants to work with someone else. Or maybe Stu will go off and do a solo thing rather than come back to Into Eternity. I mean, he’s at that level now where… why would he really have to come back? At the same time, he loves Into Eternity’s music and he has an emotional attachment to the songs that he helped to write. We’re hopeful, but at the same time we have to move forward because Iced Earth is blowing up now with Stu up front.”

“Stu now has a real job playing music, which is what we were always working towards, so that’s another reason we’re so happy for him. We had shows booked in Calgary and Edmonton, but Stu was in the US recording the Iced Earth album, so he literally had to fly back to Canada just in time to make it to those shows. But, Iced Earth paid for that flight to accommodate Stu, so they showed us respect, which was great. It’s different now because Stu is with them full time, so things are operating separately. His full time is with Iced Earth now.”

The ‘Fukushima’ single is the band’s first real sign of life since mid-2011. According to Roth the song has been sitting on the shelf for quite some time waiting for an official release

“The song was done before Dystopia came out, back in February 2011 when we did ‘Sandstorm’. So ‘Fukushima’ has been on the backburner, but we’d planned to release it right away. Our plan was to release ‘Sandstorm’, then release ‘Fukushima’ two months later, but Stu got the Iced Earth gig and that kind of shut us down because we were going to release the singles and then go on tour. We found ourselves without a singer, so everything stopped.”

Fans should find comfort in the knowledge that a new Into Eternity album is in the works, as is the required business surrounding the release. There’s just a question of who will be singing what on the record.

“We have five songs recorded, but what we’re doing now is rebuilding the band,” says Roth. “We have Amanda in the band, we’ve done some live shows with her, and we’re getting ready to sign with management and two different booking agents, who will hopefully be shopping us a deal. That’s the plan, anyway. From there I’ll have a better idea of what’s going to happen with the next release. We thought we’d be releasing singles to keep it going and then start to tour, but that’s all changed and the music we have will become an album.”

“I’d like to get Amanda’s vocals on there. When she was in town Troy (Bleich / bass) had a whole acoustic song – lyrics and melodies and everything – and Amanda went in and demoed it. I got to hear her voice in the studio and it’s cool. I want to use Stu, of course, and I’d like to get our old singer Chris to come in and do a song as well.”

Reactions to bringing Kiernan on board have been mixed, naturally, but there has been a large outpouring of support in her favour. The fans want to know, however, what made Roth and his bandmates decide she was the one that should stand in for Block. 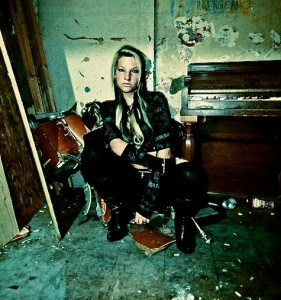 “The registers that Stu goes into are more in a female vocal range, so we were kind of limited that way. No matter who we get, nobody can replace Stu, but Amanda’s voice is just naturally in those ranges. She could hit the ‘Timeless Winter’ notes, which is what we needed. That song was the deal breaker because a lot of the guys that did it, they could hit those notes but they couldn’t do the death vocals. We would have had to get two new singers, plus these were people from Europe or the US, which means we would have had to worry about flight costs. Another great reason to get Amanda is that she’s only eight hours away (in Edmonton). Bryan (Newbury), our drummer, had recommended her, and they’re both from the same city so they can travel here together.”

“Amanda is a hybrid singer. She does these higher pitched death vocals as well as clean singing, so Troy backs her up with the lower death vocals and so do I. We’re really working as a team. We just need to tour with her and spend some time with her, because this is just so fresh. We’ve had two weeks of rehearsals with her and four shows. Amanda is an easy fit on a personal level; she’s friendly and she has our sense of humour (laughs), and the fans really seem to like her. She can do this; we’ve just got to get out there and show the public so they can see and hear it for themselves.”

Kiernan has taken any negative criticism on the chin and her enthusiasm hasn’t been the least bit stifled. As for any backlash he may have received as Into Eternity’s founder, Roth is confident the band made the tight choice.

“When we changed from Chris Krall to Stu Block, people would not accept it for a long time. It was tough on Stu at the beginning, and he’s actually going through the same thing right now with people asking about Matt Barlow. Those types of fans will always be there, but maybe if they can just trust our judgement… we’re not going to steer them wrong. Our band is going to have everything now: female vocals, the clean male vocals, and all the different death vocals. It’ll be good for the listener.”

The same goes any Into Eternity’s live performances with Kiernan in the driver’s seat.

“People forget that I also sang on the first two albums,” says Roth. “My vocals are on ‘Fukushima’ – the line ‘Rebuild and overcome…’ – and the really high vocals are Stu’s, so my voice will be there with Amanda on stage. It’s cool to have a female voice harmonizing with a male voice because now there are two distinct tones. Stu was at the rehearsals and he liked the sound of it.”

Bottom line, however, is that the fans need a new Into Eternity album on top of the reassurances that all is well…

“That’s why we released the singles,” says Roth. “To show the fans that something is happening. Judging from the meetings we’ve had, it’s probably not going to happen this year because by the time we finish writing, getting Stu back after he’s done the Iced Earth tour in April, we’re looking at 2013. I know people don’t want to hear that, but we need to be realistic.” 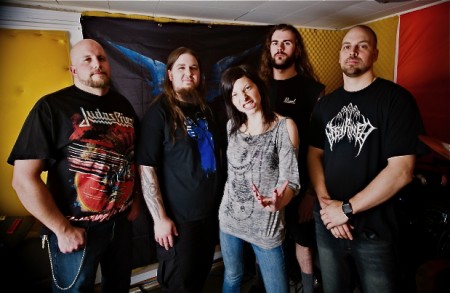 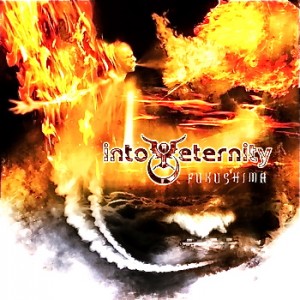 Check out Stu Block singing ‘Boiling Point’ from his Iced Earth debut here. Footage of Amanda Kiernan’s first show with Into Eternity can be found here.

Check out my interview with Amanda Kiernan here.