“I think fans are more willing to accept a band changing the singer as long as he or she has similar characteristics to the one they had for 13 years.” says Youngblood. “It would have been hard for us to bring in some power metal singer or an opera singer that didn’t have the tonal characteristics the fans want. That’s what I wanted for the band. For me, having Tommy in the band is a no-brainer.”

Asked if Lione was ever in the running as Kamelot’s new vocalist, Youngblood reveals that it didn’t get to the point of serious consideration.

“We talked about it, but I just think his voice is too connected to Rhapsody and that particular style. I really felt it would be unfair to him because he’s such a great singer, but when I heard the tapes from Tommy it was Kamelot. I think having a fresh face to take the next step was important. Fabio is one of my best friends, but I think it’s one of those situations where the record would have been great and people still would have complained. Now it’s cool because Fabio and I are talking about maybe doing a side-project at some point. That way I can have the best of both worlds.”

The similarities between Karevik’s and Khan’s voices are uncanny, even when you go back and listen to Karevik has done with Seventh Wonder. If the fans weren’t sold on him as Kamelot’s new singer on the recent Nightwish support tour through North America, new album Silverthorn is proof that Youngblood and Co. would have been fools to not to bring him on board

“There’s that familiarity,” Youngblood says of Karevik’s presence. “What’s going to happen is people will listen to the album over and over and find these nuances and emotions that are special and unique. The last chorus on ‘Prodigal Son’ in one of the best Kamelot choruses ever. We listened to some of the Seventh Wonder stuff, which is quite different from Kamelot, and I heard these things in Tommy’s voice that I liked. I sent the material to Oliver (Palotai/keyboards) and told him I thought Tommy might be our guy. We worked on ‘Song For Jolee’ and sent it to a few different singers, and we told them to write vocal melodies and lyrics for the song. The version from Tommy, I called my wife into the office to hear it and she was blown away.”

Khan’s departure had consequences that ran much deeper than a “mere” voice for the band. He came on board in 1997 for the Siege Perilous record as a seasoned performer and songwriter, having made a name for himself as the frontman for prog stars Conception. The second Kamelot album to feature Khan, The Fourth Legacy released in 1999, put them on the map thanks to the Youngblood/Khan writing team.

Silverthorn was a make-or-break endeavour when it came to hammering out songs equal to or better than what they had produced for over a decade.

“The album was written by mostly Oliver and myself,” Youngblood reveals. “Sascha (Paeth/producer) wrote some stuff, Tommy wrote vocal melodies and lyrics. In fact, Tommy and Sascha wrote ‘Prodigal Son’ pretty much completely. We worked together, but for the most part the record was finished in terms of the music before we even made a decision on who was going to sing.” 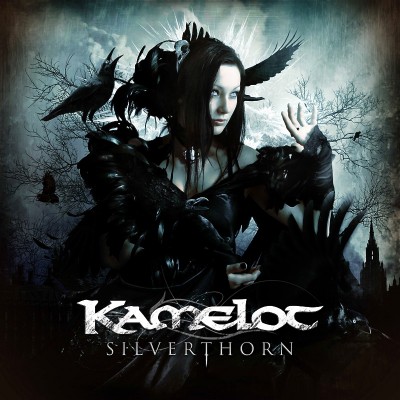