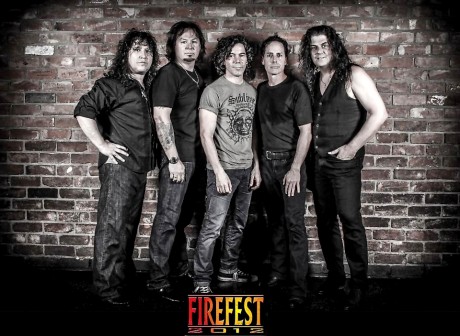 “That was the piss-off of being Canadian,” says frontman Gerry McGhee, the head honcho at Canadian music distributor Isotope for over 10 years now. “They always wanted to stick us in that box of fluff. I remember one time we were on tour and we did ‘Unleash The Rage’ at a soundcheck; we came off stage and some guy says ‘Are these the same guys that do ‘One More Try’?’ That was one song on the record, man (laughs). I love the tunes, don’t get me wrong, but if I had my way it would have all been the heavy stuff like ‘Unleash The Rage’, ‘Bulletproof’, ‘Nightstalker’ put out there because that’s what the band was all about. We kind of captured that on (third album, from 1991) Love Machine because it was close to that raw sound, but it was the label pressure that put us in that ballad box. That would have been fine if they’d at least released some of the rockers. I got in shit on MuchMusic once because I said ‘The new album doesn’t come wrapped in a condom, so open up and say aaah.'”

Brighton Rock called it quits in 1991 and reunited in 2002. It’s a partnership that’s remained intact ever since, albeit for doing shows once in a while if the mood or the situation calls for it. There’s always been a healthy amount of babble amongst the fans pushing for a full blown album / tour return, but since the birth of Fraze Gang – featuring guitarist Greg Fraser and bassist Stevie Skreebs – and the band’s appearance at Carl Dixon’s benefit show in Toronto in October 2008 it’s become an insistent pounding on the door. Their recent performance at Firefest 2012 dumped more fuel on the fire.

“I think what’s really brought it to the forefront are things like Facebook and YouTube,” McGhee says of the push to get back to business. “That’s kind of rejuvenated a lot of it, because a lot of people that maybe never saw us or only read about us are getting into it. Somebody posted a home made lyric video for ‘Still The One’ and one lyric was wrong, so I just sent a post telling them that, and they told me they got the lyrics off the band’s website. I asked, ‘Where are you?’ and they told me ‘Mexico City.’ (laughs). We never played Mexico City – I don’t even know if we were released in Mexico – but that’s the thing that has rejuvenated it. But, because I deal with labels every day, I know that on a large scale the foundations of the days of building artists up are gone. They’re never coming back.” 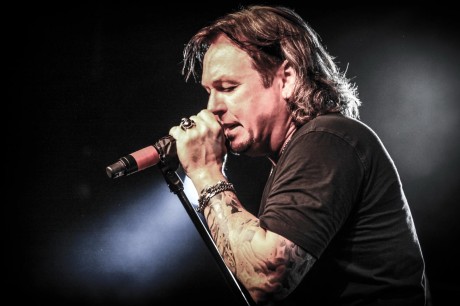 “Labels won’t put their support behind bands anymore. A lot of the new stuff that’s out there, none of these guys play lead guitar and half of them can’t sing. If I take my kids, who are in their mid-20s now, to see KISS I tell them that this is what a show is, this is what it was all about in the ’80s. There was melody in the songs. I think a lot of people my age who were involved in that era realize now when they sit back that although it got slagged so bad, the ’80s was probably the fucking music industry at it’s peak.”

McGhee has since confirmed that Brighton Rock is in the process of writing songs for a new album. Some folks will roll their eyes in dismay, taking up the mantra that hair metal is dead, but the number of unique hits bands like Mötley Crüe, W.A.S.P., Poison or Ratt get on daily BW&BK news posts – which is only one example – says different. There’s still a core audience that gives a damn, even if they do have families and mortgages to worry about.

“You look at guys like Mötley Crüe and Poison and Tesla and all those guys that are still doing it,” he points out. “Twenty-five years later and they’re out there playing stadiums. They’re not selling records the way they used to, but nobody is unless it’s a pop hit or one hit wonder thing that goes away. I think as we get older the kids will start to… they live in such a digital reuse / reduce / recycle world that I think there’s more of an attraction to nostalgia. I think the ’70s was a big nostalgia clip for the ’50s, and I think you’re going to see it with the ’80s judging by what I see from my kids and their friends. They hear Metallica’s coming to town and they lose their lid.”

With present day technology at their disposal, Brighton Rock could release new material independently rather than seek out a label. Going the indie route translates into a truckload of extra work, but McGhee doesn’t rule out the possibility. Bottom line is that the new music gets out to the people that want it.

“It’s weird, because now I’m a lot more aware of the business end of things. I was aware of it when I was in the band because that was always important to me, but when you’re in a band it’s a democracy so sometimes you have to do things that you’re not 100% comfortable with. I saw an interview with Brian May saying that Queen once signed a production deal that was the worst deal they ever had. We signed that exact same fucking deal (laughs). It was the worst thing we could have ever done but the thing is, when you’re working all your lives and playing places like the Gasworks in Toronto or in Montreal or Trois-Rivières and you get the chance to record with a major label, you take the three album deal and hopefully you’ll have a career. And when that’s done you can renegotiate and start making money.” 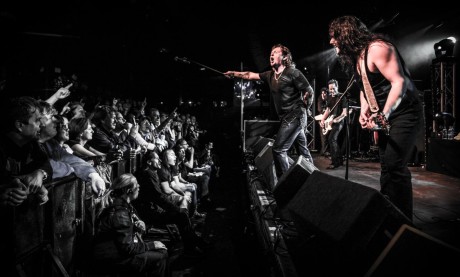 As for how the new album is shaping up, it’s much too early to tell. McGhee and his bandmates have only scratched the surface of a long overdue in-studio reunion.

“I’ve never been a good multi-tasker,” McGhee admits. “When I do one thing I stick at it and I give 110%. I did that when I was in Brighton Rock, I do that now with Isotope. That being said, I haven’t really written a song since I left (post Brighton Rock band) Off White, and that was 20 years ago. And yet, on my last vacation I started writing four songs.”

“The good thing is we all still get along great. Apart from Johnny (Rogers / keyboards, guitars) exiting prior to Love Machine – and that’s just stuff that happens in bands when you live and breathe together for that amount of time – we’ve never had any issues with each other. Everybody’s cool, everybody’s on the same plane, so you never know. I’m getting to the point now with what I do here at Isotope… this has been the longest job I’ve ever had in my life and I’d kinda like to wind it down. It’s a big enough company, there are enough people here that it runs itself. When you get to rehearsals and the songs start to come together and you’re sounding pretty good, it’s great being in a band. It’s harder for me than it is for the rest of the guys because they all play all the time, so their chops are still down. Going from doing the last show in 2008 for the Carl Dixon charity to singing ‘Bulletproof’ now is not an easy task (laughs).”

Maybe so, but McGhee still has his pipes. Amazingly so considering what little singing he’s done since Brighton Rock’s serious touring days over 20 years past.

“My voice gets there, but you know what? It’s not like the old days where we’d go in for a week of rehearsals and then hit the road for 18 months. I remember there were days when I had laryngitis and I couldn’t speak, but I could sing. Right up to that Carl Dixon show, it was really hard to get it there, and I don’t know if it was adrenaline or just the fact we were on stage, my voice kicked in the day of the show. Fraze had been saying ‘We can tune down…’ because it would be easier for me to sing and everybody does it anyway, but my motto has always been ‘Fuck no’. The way we wrote it, that’s the way we’re going to do it. ”

“We started the rehearsals for Firefest in June, so that even if it was once a week or missed a couple weeks in between we’d get things loosened up for when we did the Rockpile warm-up show (in Toronto). I’m feeling pretty good about where my voice is at. It’s a question of getting back into the groove, getting your breathing back and stretching everything out again. Because I’ve done nothing except maybe one cover band thing and five Brighton Rock shows in 11 years. I basically went from a dead stop to singing again.” 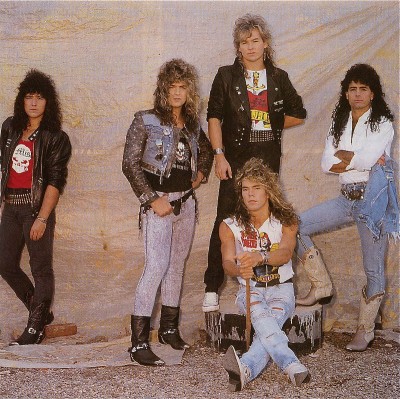 Check out Moffat’s official website at martymoffatt.zenfolio.com. His complete Brighton Rock photo gallery from Firefest 2012 can be found here.

Classic live footage from the ’80s can be found here, and a clip from Firefest 2012 is online here.

Stay tuned for Part 2 of the interview with Gerry McGhee.