Double Crush Syndrome is his new lease on musical life, a three-piece band hinting of everything from The Ramones to Baz-era Skid Row to The Mamas & The Papas. Yep, pretty basic three chord punch on the surface but big on the singalong hooks, with tracks ‘Yeah! Pain!’ and ‘She’s A Pistol’ sucking you in from the start even though you might be of a mind to dismiss it as pap. The You Filter is in fact a reminder that the Keep It Simple Stupid formula does work. ‘Blood On My Shirt’ and ‘Fuck You IS My Answer’ see DCS channeling Skid Row – ‘Get The Fuck Out’ and ‘Riot Act’ come to mind – while ‘I’m In Love With You’ and ‘With Me’ go in the opposite direction as two ‘60s cheese-flavoured tracks that deftly (thankfully) avoid the Travolta / Newton John Grease trap. An impressive collection of garage-band-with-skills songs, middle finger anthem ‘Die For Rock N’ Roll’, ‘We Cannot Be Ruled’ and ‘Blood On My Shirt’ coming in as the faves of the moments, all shred and attitude served up old school with choruses that stick.

Credit where it’s due, the presence of bassist Aurora Steffens is what elevates The You Filter from mere quality to outstanding. Never mind the eye candy; you simply don’t expect to hear actual moving basslines behind three chord rock, but they’re all over the album. Interesting how she turns ‘I’m In Love With You’ and ‘With Me’ into songs suited to D-A-D’s catalogue of hits and near misses. On top of that, Steffens’ backing vocals are in your face at every turn, welcome harmonies and contrast to Brings’ Andi Deris-ish (Helloween) delivery.

It’s interesting to note the album is sequenced in what would be a killer setlist. That said, the closing track ‘Tonight’ is the perfect ending to a 30-minute blood, sweat and beers stage-wrecking romp as Double Crush Syndrome pull out all the stops for one final kick in the teeth.

Thank you and good night.

The You Filter tracklisting:


For more on Double Crush Syndrome go to this location. 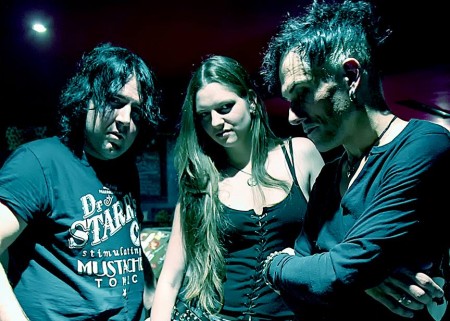