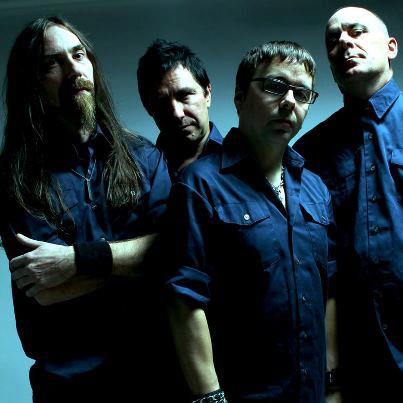 “I think it was just a natural thing,” Joe says of going from jamming to hitting the studio. “It just felt right to take the next step. We wanted to record these songs properly, with really good gear. It’s a two part album; the first part is Enter The Metal, the second part is Return Of The Metal which will be out in the spring. These songs were never recorded using high quality equipment, so we decided that if we want to compete with the big boys we have to make the songs sound stellar. We went to a proper studio and they just happened to acquire the Abbey Road mixing console. It was amazing.”

Folks who fell for Varga through Prototype or Oxygen should go into Enter The Metal with an open mind. Otherwise, be prepared to choke on a horse pill. It’s still Varga as they were known and loved at the core, but comparisons can and will now be drawn to the likes of Voivod, Protest The Hero and even Annihilator along the way.

“Not to put those albums down, but Prototype and Oxygen were more straightforward,” says Joe. “It was metal, but the music was more streamlined and had some industrial influences because we were into the Nine Inch Nails thing. It was a sign of the times back in the ‘90s. It took some serious rehearsing to get our chops back (laughs). But we’re definitely happier doing this stuff.”

Begging the question as to why Varga stifled what is clearly some staggering musical talent when writing and recording Prototype.

“That was the record company saying ‘Hey, you guys want a contract? Streamline your sound a bit and we’ll talk…’” Joe laughs. “We decided to play their game and they gave us a shot. We’ve always liked all styles of metal, and two of our biggest influences are Judas Priest and Iron Maiden. There was nothing wrong with streamlining our grooves and going that route for a while.”

For information and updates on Varga go to their official website here.