Primal Fear’s brand of power metal will never be regarded as competition against bands like Nightwish, Dream Theater or Soilwork. Nor will their new album Delivering The Black be considered a departure from the material they’ve released 15+ years and 10 albums into their career. You’d be hard pressed to argue, however, that Primal Fear haven’t evolved by leaps and bounds since their 1998 self-titled debut. The new album’s lead-off track ‘King For A Day’ on its own is enough to push the point home that Primal Fear in is a much stronger and far more aggressive animal going in to 2014. Listen to Delivering The Black as a whole and it’s no small wonder the band is sharing if not outright stealing the spotlight from their power metal peers these days.

“I’m very happy with it,” Sinner says of Delivering The Black, soft spoken as always. “There are subjects on the album that I like more than what we did before, and that’s important for me because if there’s no evolution in the band and no difference between albums I wouldn’t be pleased. Mostly the evolution is in the songwriting and production, and it definitely shows. I think Unbreakable (from 2012) was the most successful Primal Fear album worldwide, so it wasn’t the point to change the style of music or re-invent Primal Fear with a different approach. The next step after Unbreakable was to make this kind of music, which the fans love, even better. We worked hard on the guitar parts because the guitars are the main instruments in Primal Fear, pushing Randy (Black/drums) to a new level, and making Ralf (Scheepers/vocals) better than he ever was. Those were our targets.”

Sinner makes no bones about Unbreakable being in the band’s rear view mirror while they were putting Delivering The Black together. This self-imposed pressure paid off in the end judging by reactions from the press and the folks in charge of deciding when and how (and if) the album is promoted.

“Unbreakable was great in our view and in the eyes of the fans. Even our record company (Frontiers), which is more into melodic rock, was totally enthusiastic about the new album. And our Germany / Austria / Switzerland distributor, Soulfood – which are three very important territories for us because we sell a lot of records there – they were totally blown away and convinced the record company to produce some special limited edition formats this time. Everyone has been really surprised about the sound, the power and the energy on the album. Their reactions proved that we had the right vision and that we’re on the right track with the new record. So basically, the business people think we’ve delivered a better album than Unbreakable.” 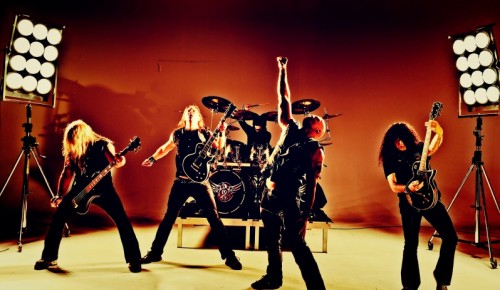 Social media being what it is these days, there was no shortage of updates from the Primal Fear camp on the progress of Delivering The Black. Sinner clearly enjoyed his role as taskmaster, overseeing the production as his bandmates hammered out their parts in the studio. Drummer Randy Black, for example, put in what Sinner regards as some of his best work to date.

“I had the feeling in the studio from the very beginning that we had better communication and a better vibe,” Sinner admits. “It always depends on the situation. It could be that there’s tension or discussions in the studio – ‘I want to play it like this’ or ‘I want you to play it like that’ – but when I sat down with Randy, from the first minute the vibe was great. There was only one song where I had a different vision from him, and in the end he followed my path and was very happy with the result. Randy has been in the band for over 10 years, we know each other really well, and this time the communication was very creative. We worked really hard, and he was so well prepared that he could play every song without having the music in his headphones. We had great gear, a great vibe, and I was in the great position to kick his ass (laughs).”

Scheepers’ performance on Delivering The Black is equally impressive. Once regarded by some people as the band’s pseudo-Halford weak link, his high-end vocal delivery has taken on a gritty edge that adds welcome character to the songs. It’s an element to his singing that began with Scheepers’ self-titled solo album from 2011 that’s become increasingly prominent. With years of experience under his belt of pushing Scheepers in the studio, Sinner says that’s no longer a part of the creative process.

“Ralf has been working for some time now in his own studio, and he has everything under control,” says Sinner. “He knows what he’s doing without anyone giving him instructions, so we really just discuss the melodies. We make a pattern and work on it, he sends me what he comes up with, and then we discuss it some more. Or we don’t discuss it at all because what he came up with is so good. The working flow in Primal Fear is really good now. Ralf has his own schedule, he’s not standing behind a microphone in a big studio that costs a lot of money, so he feels more comfortable and can really focus on his work. I don’t have to push him anymore because he does that to himself.”