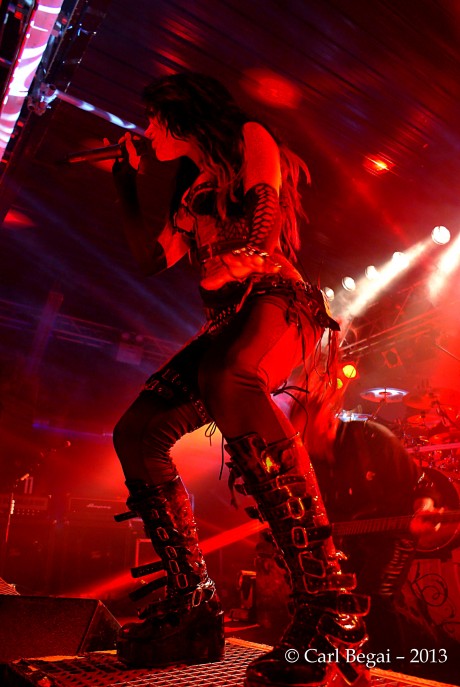 “I thought it would be hard to switch between the two but it was actually super easy. The thing is, I’ve always wanted to be a drummer or something where I could just sit back and watch the show, and not have too much attention on me. Now I’m kind of doing that with Kamelot, which is cool.”

Kamelot fans that attended the band’s October 2012 show in Denver, CO supporting Nightwish will remember Alissa and Elize having a truckload of attention placed on them when they stepped in for ailing (and former) Nightwish singer Anette Olzon quite at the last minute. Asked if she would or could step in for a whole show if Kamelot vocalist Tommy Karevik fell ill, Alissa doesn’t miss a beat.

“Fuck no (laughs). It’s all male vocals, so it would be too low for me to sing. And Tommy is an awesome singer, so I don’t think I could pull it off. I know the songs front to back, sure, but I don’t know how well that would go over with the fans. Tommy is a way better singer than me. Actually, Elize and Tommy are by far the most talented singers I’ve ever heard.” 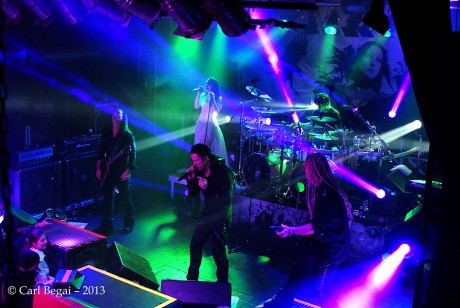 Regardless of the experience Alissa had under her belt as a singer, performer and songwriter before joining the Kamelot family, she readily admits the experience has made her a better vocalist.

“For sure. I think it’s brought a lot of maturity to what I do, because now I have a lot more appreciation for songs that people can sing along with. I’ve learned about songs that are well structured, less chaotic and progressive than some of the songs on (third Agonist album) Prisoners, for example. I’m really into songs that you can remember after hearing them for the first time but they still have enough depth that you can actually appreciate them with multiple listens.”

It’s no surprise hearing that Alissa’s presence on the Kamelot stage has resulted in a certain amount of crossover – or curiosity at the very least – between fanbases.

“It seems to be going both ways. Some people will come to a show because they like The Agonist and they want to see me with Kamelot, which is cool. And it’s gone the other way, where people who like Kamelot check out The Agonist. It makes me feel really appreciated as an individual and, as I continue to expand my musical career, that’s priceless to me.”

Conversation turns to Kamelot’s upcoming South American tour and Alissa’s wishlist of bands she’d like to hit the road with in the future. One name that comes up is Amaranthe, a band that’s quite different from both Kamelot and The Agonist.

“I’ve never actually seen Amaranthe live but I know how Elize performs and she’s such a good singer. I like the two singer format that some bands have nowadays, like Despised Icon, but the three singer thing is really cool. If I hear people talking about Amaranthe and they’re real metalheads, they think they’re going to hear a metal band and some of them say ‘Well, they’re not heavy enough for me.’ That’s how it was for me at first, too; ‘This isn’t a metal band.’ But if you approach it from the other side, as in I’m going to see a band and I’m not putting a label on it, then it’s cool. I like male vocals, I like female vocals, I kinda like the Euro-synth sound, I like screaming vocals, I like metal, I like guitar solos, and it’s all in there. I hope they catch on.”

Judging by everything that’s already on Alissa’s plate, 2014 promises to be even busier than last year. Not surprsingly, she’s prepared to meet the challenge head-on.

“After endlessly touring the world with different bands this year, I really see how amazing the music enthusiasts out there can be. I’m just so appreciative of the loyalty and love shown to me by my fans this year. I look forward to 2014 and whatever the future brings for me knowing I have such a strong community backing me.” 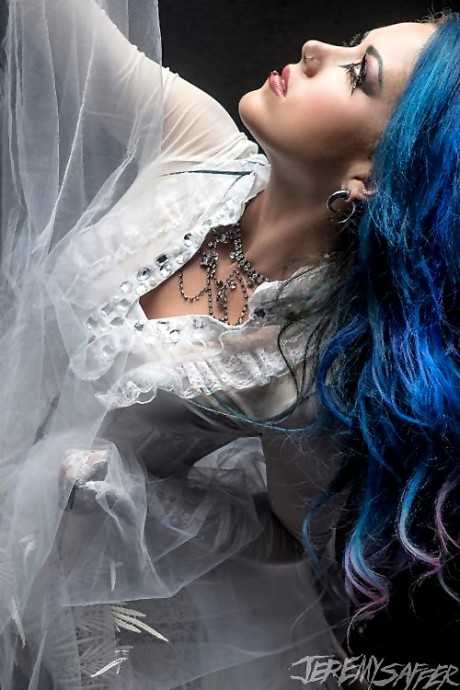 For updates and information on Alissa White-Gluz go to this location. Everything Kamelot related can be found here.

Check out Kamelot performing ‘March Of Mephisto’ here. Footage of The Agonist can be found here.

2 thoughts on “ALISSA WHITE-GLUZ – The March Of Mephisto”