“I love the guys in Kamelot,” says Lione. “I love the band, I love the crew, we had a beautiful tour. I think we did something like 49 shows together in North America, South America and Europe. The response in every place we played was great, so I know that it wasn’t easy for Thomas (Youngblood/guitars) to make the decision to choose someone else. Of course he preferred to get somebody that doesn’t already have a big band because it’s easier to manage the schedule without having to worry about what else is going on. In the end, I appreciate that we’re still really good friends. Thomas sends me emails every so often, he’s interested in doing a side-project with me, and I’m sure he’s happy with his decision to bring Tommy into the band.”

“I was really happy with the year I spent with Kamelot,” he continues, “and I’m even more happy about it now when everyone is writing to me telling me that the tour with me was killer (laughs). I love the band, I love the music, and if I’m going to be really honest, the way Roy sang…wow. He’s the only singer that I’ve really liked in the last 10 years. For them to ask me to sing with them, that was a huge honour.” 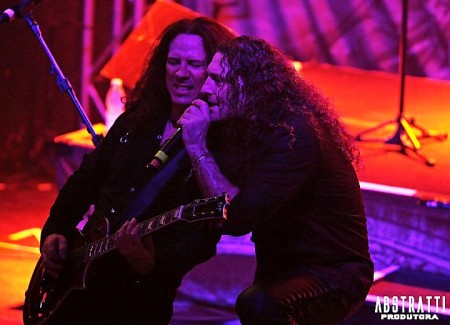 Lione was asked to play understudy again in 2012, this time for Brazilian bashers Angra following the unexpected departure of Edu Falaschi. At the time of this interview – conducted during the Gamma Ray tour – he was still fronting Angra but revealed his future with the band isn’t set in stone despite what people might have heard. Bottom line, however, is that he’s a perfect fit for the band.

“That’s one of the reasons they asked me to continue with them, but the situation isn’t easy. One of the points is I don’t live in Brazil, and I also have Rhapsody Of Fire, but we all have a good feeling about this. We did 18 shows together so far and the reactions have been really good, so we want to continue this. We actually have 14 more shows to do together this year, and then after that they want to release a new studio album, and they want to release it with me. Nothing is official but we’re still discussing everything because doing a tour and doing a studio album are two very different things. Also, I would be singer #3, so it would be another new era for Angra. I’m trying to figure out what would be best for them and for me because I don’t want to tell the guys ‘yes’ and then not be able to give them 100%.”

“The thing is, after this tour Rhapsody Of Fire has six festivals to do, and we’re discussing doing shows in South America and maybe Japan at the end of the year. And of course we want to start thinking about and composing a new record. So, if Rhapsody is busy for two months I might have three or four months free to do other things. But, if Angra needs one month to record a new record and then another month or two for touring… I really don’t know what I’m going to do at this point. I’d like to sing for Angra’s new record, though, because they’re great guys and great musicians.”

Whatever the case, Lione will remain with Rhapsody Of Fire, his permanent day job that’s pushing the 20 year mark.

“I’m very surprised about that,” he admits, “because ususally it’s not like this. It’s amazing if you think about it because most new bands that come out these days last maybe five years. They change drummers or bass players or singers, but we went 15 years with the same line-up. I’m very proud to be in Rhapsody Of Fire.” 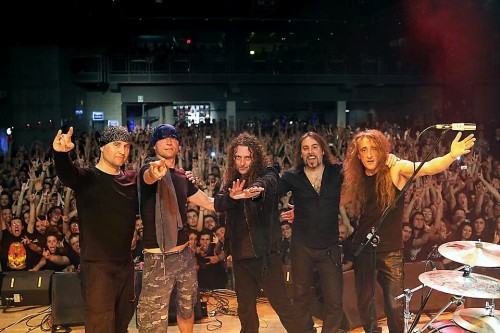 Check out Lione in action via the links below: