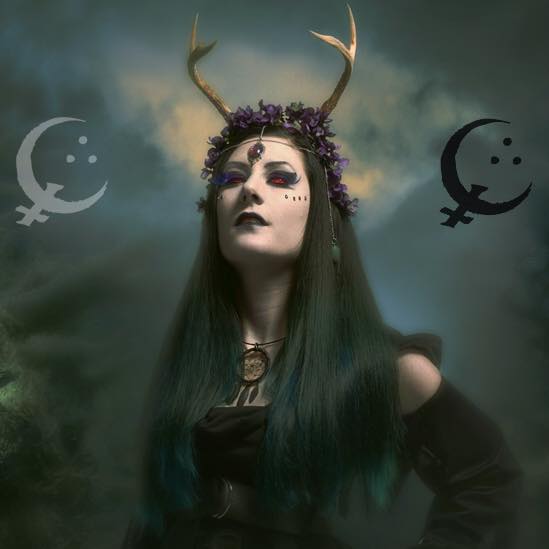 “I didn’t know what I was getting into because I’ve never written an album long distance before. It was the strangest experience. The thing was, I was hired as a temporary replacement just as a part of the live band. In the first few weeks of the tour Dani got to know me – we didn’t really get a chance to talk until we were into the South American tour – and we figured we’d just grab a drink and talk for an hour. We stayed up until 5:30am talking. I showed him my solo stuff and he said ‘That’s beautiful: can you do that for Cradle?’ which surprised me, but that didn’t transpire until we got our new guitarists Rich (Shaw) and Ashok (Šmerda) in the band. Me and bassist Dan Firth started writing stuff on our own for Cradle, and ‘Yours Immortally…’ and ‘Hammer Of The Witches’ were the first demos for the new album that we did together. We showed them to Dani and I think that kind of lit a fire under his ass and convinced him we could do things with this new line-up.” 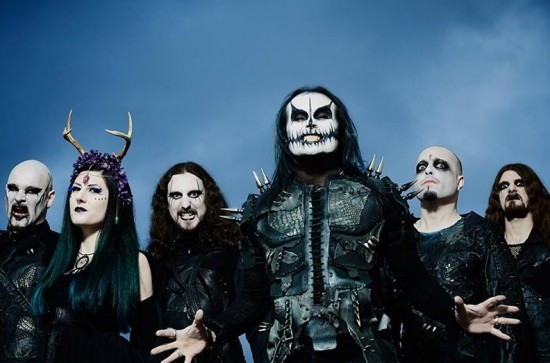 “It was intimidating at first because our drummer Martin (Skaroupka) is a very talented multi-instrumentalist,” she adds. “He could have said ‘I don’t want to work with you’ or ‘Show me what you’ve got and I’ll help you.’ He was so good to me through the entire process. Sometimes you get a noob in who has no idea what they’re doing, and when I showed up I felt like I was wearing a helmet and water wings saying ‘I’m gonna write for the new Cradle album, check me out!’ (laughs). I was so scared; it was like kindergarten all over again. The guys were very cool, it was just a strange way of working together.”

“I’m wearing 20 different hats in this band (laughs). When we had the new guitarists come in I was telling them what to do, for example, I did their make-up. A strong band is like a family, and having them come in was like having two new kids. I had to show them the ropes. That was something like my first month on the job.”

Lindsay will close out 2015 feeling fully integrated as a member of Cradle Of Filth, having worked her ass off since Day 1 of being welcomed to the coven.

“I always feel like I have to prove myself because I’m super creative and always pushing myself to do a ton of stuff. I want to do it well and making mistakes is part of that, but most of the mistakes are hidden in the closet so nobody sees them (laughs). My predecessors, Caroline (Campbell) and Sarah (Jezebel Deva), have both given me their blessing and that makes me very happy. Some of the fans are really sweet, and there have been others that think I suck, but I know I’m not as bad as all that (laughs). Dani trusts me and I don’t know why. He’s crazy and he’s insane to trust me, but any time it comes to visuals, writing or performance he’s always happy with what I’m doing. My inner critic is always wondering what’s going on (laughs).”

“It was intimidating at the beginning,” Lindsay admits. “When I played my first show with the band I didn’t get a rehearsal, I got a soundcheck. When we were finished I was thinking ‘I can’t believe I got through that…’ but that’s Cradle Of Filth; flying by the seat of our pants. We have an extreme setlist this time around. We put in ‘Queen Of Winter’, for example, and I want it to sound exactly like the album. I leave Schoolcraft at home because that’s me being me as a singer / songwriter, and I want to be an asset to Cradle Of Filth. If you don’t have the fans you don’t have anything, and I want to give the fans what they want.” 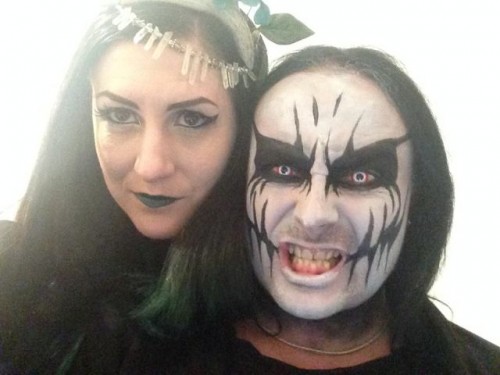 “If people think that I know what I’m doing all the time, then I must be doing something right. I think I’ve finally hit my stride in this band because I come off the stage feeling like I’m 50 (laughs). My back hurts, my neck hurts, my feet hurt. I just want a bubble bath and go to bed. It’s a lot of work but we just want to put on the best show possible.”

“Oh God, that was Dani’s idea. They’re from Montreal; I ran into Coen (Janssen) from Epica on the Kamelot tour and he asked if I wanted one. I showed it to Dani and he was like ‘Absolutely! You have to get one for Cradle Of Filth! It looks like a Dali painting!’ I wanted to wring his neck (laughs) but it cuts down on costs when we travel. It took me three weeks to get adjusted to playing the thing, and it’s hard to look sexy playing it because I feel like a zombie.”

Looking back on her experiences going into and during the making of Hammer Of The Witches, Lindsay admits there are many mixed emotions listening to it now.

“I think the fear of screwing it up kept me and the new guys motivated. When the demos were done the music sounded like it was going in the right direction, but when it was done – something like a week before the release – we were so scared. We liked it, but would the fans like it? All of us were Cradle fans before we joined the band so it was that classic Cradle Of Filth music that influenced the new music. The response has been overwhelming.”

Cradle Of Filth is Lindsay’s priority at this point in time, but she assures her fans that Schoolcraft is very much alive and well with new music coming down the pipe soon enough.

“When I’m on the road I’m revising lyrics and recording melody ideas on my phone. I’m currently working on another single to be released this winter. It’s a collaborative effort between me and another band, but I won’t say who it is just yet. We’re working on stuff right now, they’re sending me their stuff and I’m saying ‘yay’ or ‘nay’ to it. Sort of like what Dani does in Cradle Of Filth.”

If you’ve never bothered to sample Lindsay’s solo material, it’s time well spent on a journey through her catalogue. There are several standout pieces including the Schoolcraft original worthy of a Tim Burton film, ‘Emily’, and a bombastic orchestral metal cover of the Madonna hit, ‘Frozen’. 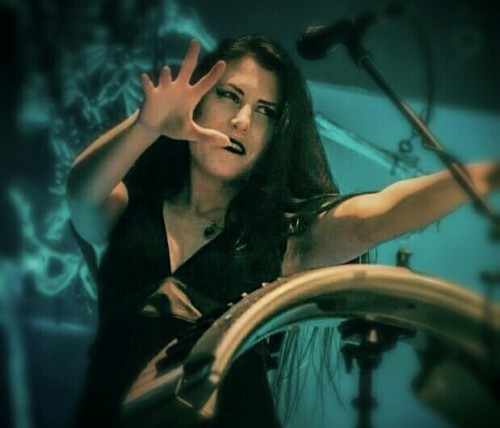 “I have an orchestra guy back home, Spencer Creeghan, whom I work with. I tabbed ‘Frozen’ out and did my own version of it terribly rough on the computer. I sent my basic string ideas to him, and he went full blown on the track. He had wanted to cover the track for a while, too. I think he went a little beyond my vision because it’s massive orchestrally, but it was meant to be a rock song and my guitarist (Tyler Williams), who is also my producer, put some serious effort into it. I’m a team (laughs).”

Speaking of Lord Filth, he cut duet vocals with Lindsay for the Schoolcraft track ‘Fading Star’ released in 2014. Although it’s quite different (read: subdued) compared to his blood and guts performance on former Cradle Of Filth backing vocalist Sarah Jezebel Deva’s song ‘This Is My Curse’ from 2012, Dani didn’t simply phone in a non-commital throwaway performance.

“Dani gave it his all on Sarah’s track,” Lindsay agrees, “and he did the same for me. Dani was constantly communicating with me, asking what worked and what didn’t. He was great. That was so sweet of him. I was so scared to ask him because it was before we started writing for the new Cradle album, but when I asked him he said ‘Of course.’ I wrote that entire song in one day, everything you hear. I was so determined.”

For the future, Lindsay sees a new full length Schoolcraft album as part of her agenda. And if all goes well, doing some live shows in support of it.

“That would be a dream come true. I was going to make a full length album but then Cradle showed up, so Schoolcraft isn’t on pause but more like slowed down. Sort of like the way your internet would slow down when it was dial-up (laughs). I’ve demoed up to 25 Schoolcraft songs that are currently sitting in my producer’s computer. I’m glad I have the experience of the Cradle album under my belt now because I now have a clear vision of what I want to do. But, I also want to stay with Cradle Of Filth as long as I can.”

Check out the official Schoolcraft Bandcamp page here. Some Schoolcraft material is available below.